Well, I got a big box of stuff in from the crew at Team Collectors. Since I'm the only Canadian in the group, one member took on the task of collecting cards to mail up to me. It arrived yesterday.

All sorts of Jays, some Expos, and a number of 1978 cards for my Birth Year Set Build. 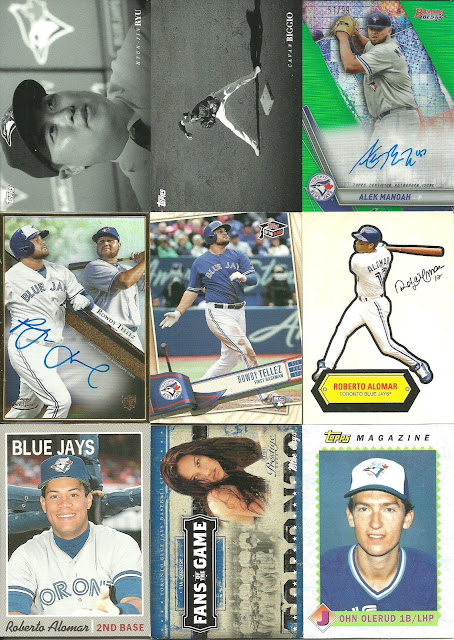 All sorts of goodies here.
I think the first couple cards I scanned are from the On Demand lines of Topps, so I have to actually look them up..
An Alek Manoah and a Rowdy Tellez auto also made their way up here. The Tellez is one of those framed autos. The Big League looks like it's an educational issue.
Old magazine cards with the Alomar and the Olerud. Olerud has his college positions listed.
Tia Carrere is apparently a fan of the Jays. According to the card, started watching while filming Wayne's World. 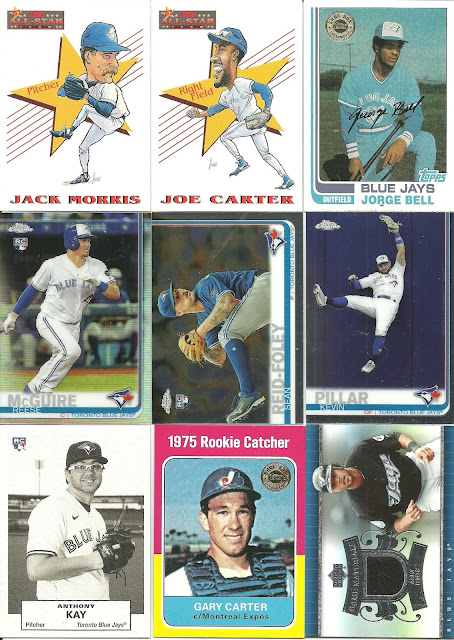 I loved the Score All Star cards where they did these caricatures. Shoebox Collection Bell.
I used to not really care for the Chrome cards, but they have grown on me. Not enough to go out and overpay what they charge now, but I'm open to getting them. I love that Pillar.
Anthony Kay is one of those Montgomery cards. Again, not too sure what those are..
Can't forget the Carter here. Another Shoebox Collection. 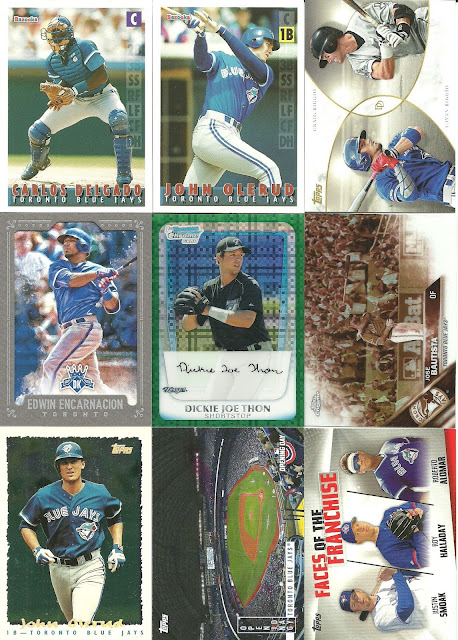 Carlos Delgado in catcher's gear. How many people remember he started as a catcher, then a left fielder?
Cavan and Craig Biggio showing their bloodline. The Encarnacion Diamond King has a raised border, almost like a picture frame. It's kind of cool.
Dickie Joe Thon was in the Jays system for a while.. Never made it out though.
The Batflip.. In Chrome Sepia.
I love that Opening Day photo of the Dome.
Faces of the Franchise. This is dangerous for most teams. Some barely have three you associate with a team.. (quick, when you hear Marlins.. Who do you think of besides Jeff Conine?)
With the Jays, you have arguments for Stieb, Carter, Fernandez, Alomar, Halladay (both are shown here) 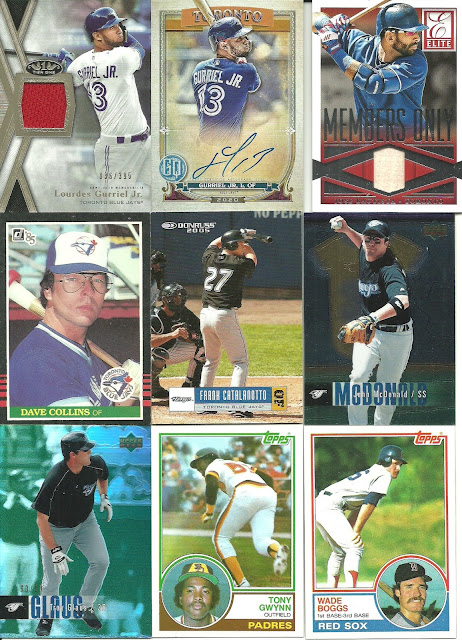 Some relic goodness with Guerriel and Bautista. Also a Guerriel auto.
Dave Collins as a Jay.. He was one of the three guys picked off in the Tippy Martinez/Lenn Sakata debacle..
It seems like Upper Deck dabbled with a chome variant as well. Both Johnny Mac and Troy Glaus are shiny..
1983 Tony Gwynn and Wade Boggs rookies. Nice.... 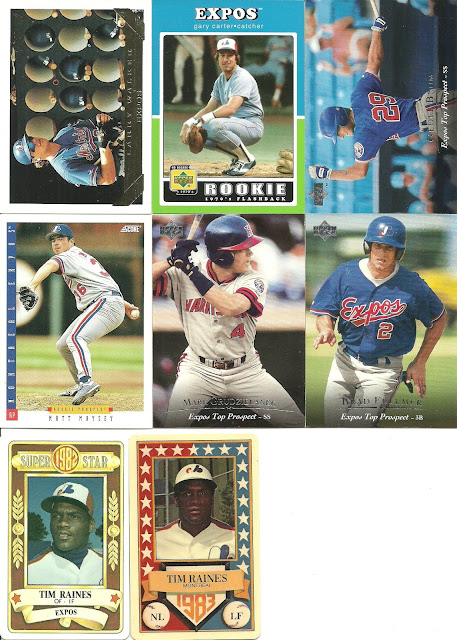 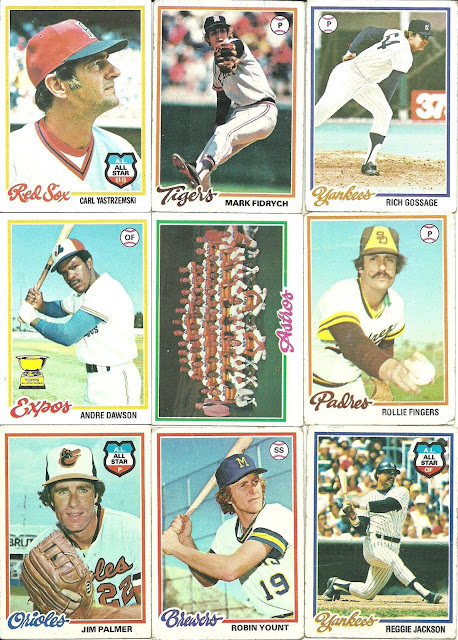 Now I just pulled a selection of notable cards rather than scan them all..
Honestly, going into this, I wasn't expecting the big cards to be here. So I knew I wouldn't see Eddie Murray. I figured I wouldn't see some of the other big names like Ryan, or Reggie, etc..
But I was surprised. Pleasantly..
I got one of the Dawsons I needed. I got Yaz.. I got Reggie. Palmer. Fingers.. The feathered Friends beside Yaz with the Bird and the Goose.
The Astros card is there because I love those uniforms.. 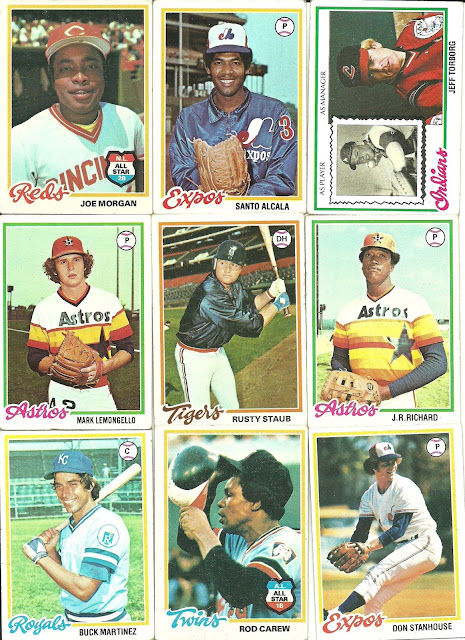 Jeff Torborg.. I don't know how many people remember this, but his son was a professional wrestler for a while. Dale played the Kiss Demon in WCW.
Mark Lemongello.. He did NOT want to join the Jays. There are a number of stories out there that make you wonder if he was ever really all there..
Le Grand Orange! But as a Tiger.
Buck Martinez as a Royal. Rod Carew! 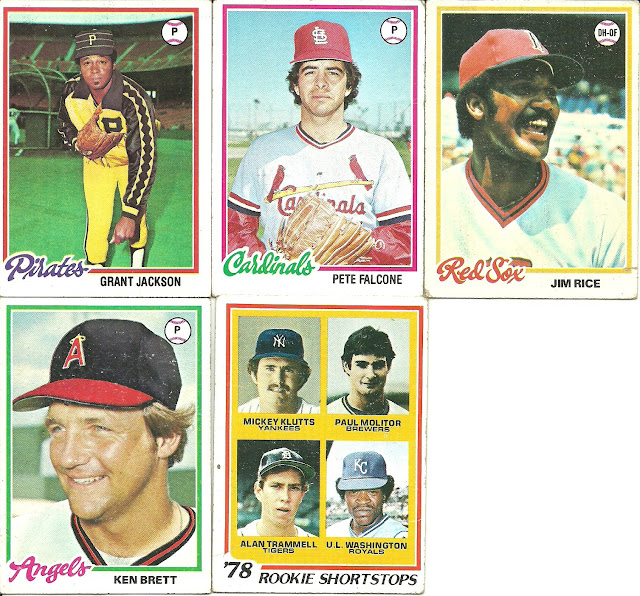 I honestly don't remember if the Grant Jackson was part of the cards I received from the group or not (I filed them them pulled cards later to scan.. I derped) but that coat is glorious.

Pete Falcone.. Every time I hear that name I think about the show Fugget About It. The son's name is Pete Falcone.

Jim Rice. Another one I thought I wouldn't see..

Ken Brett.. He was the losing pitcher in the first ever Jays game in 1977.

I almost fell out of my chair when I saw this card... When I said I wasn't expecting to see the big cards earlier? This was one of the big cards I didn't expect to see.. Yet.. Here it is..

So with the influx of 78s from the Team Collectors, my 78 build is 92% complete. When my order from Sportlots that I put in last night arrives, it'll be at 100% minus any variations that may or may not exist..

Thanks to all who threw in!