Today we found out the newest inductees to the Hall of Fame...

What? We had that last week or a couple weeks ago?

Aye, laddie... But this is the Canadian Baseball Hall of Fame..

Induction into the Canadian Hall is slightly different than the one in Cooperstown. Inductees must be from Canada, or have made a significant contribution to baseball in Canada. There are many people, such as Joe Wiwchar, who are in that work on the amateur level to grow the game in their area.

To go along with these inductees, John Olerud and Jaques Doucet are also being inducted from 2020. 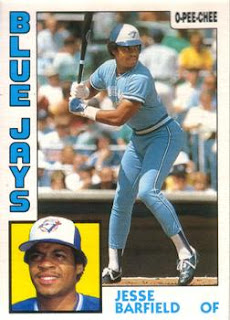 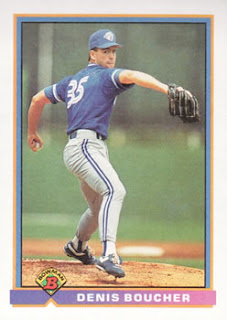 Signed by the Jays in 1987 as an amateur free agent. (At the time, Canada was not part of the amateur draft like it is now)
He made his MLB debut for the Jays in 1991, pitching for them until he was traded with Mark Whiten and Glenallen Hill to Cleveland for Tom Candiotti.
In 1993 he was dealt to Montreal and made history as part of an all-Canadian battery with Joe Siddall.
After his playing days he's been coaching at the National level, for team Canada both in international competition and in the WBC. 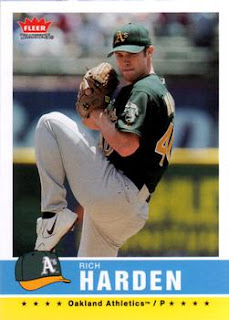 He was originally drafted by the Mariners in 1999, but decided not to sign. He signed with the Athletics after they drafted him in 2000.
He made his debut in 2003 and pitched until 2011 with the A's, Cubs, and Rangers.
Joe Wiwchar
Joe made his mark in Manitoba as a player, coach, and administrator. He lead teams to provincial championships and medals at Canada Summer Games.
He was part of a committee that founded the Manitoba Baseball Association in 1968. He was also a Baseball Canada executive in 1974-1975 and lead a group of five children to the World Childrens Baseball Fair in Japan.
Most of the information here is from the Canadian Baseball Hall of Fame website.
Check it out.. I put a link up top.

Hey Hey! It's Saturday.. You know what that means...

Honestly, lately I haven't been able to think of things to blog about aside from Saturdays.. Not much coming in through the mail lately plus just not wanting to show random cards I may or may not have shown is keeping me away a bit.. Well, that and my depression and anxiety..

I have ideas of things I want to try and things I want to do, but I have no clue where to start.. In a way it's almost like when I started making uniforms, hats, and logos for OOTP Baseball.. Then a wonderful member of the OOTP Forums created small programs with templates to help in the creation.

One of the things I'd love to do is try making my own cards.. But again, I have no clue where to start.

Anyway.. Enough of my babbling.. You're here to see what signature I pull out today.. 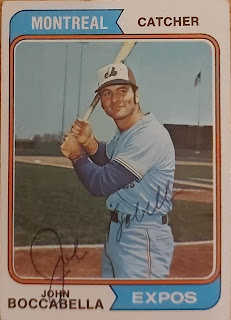 We're going back to the days of Parc Jarry.. Jooohhnnn Bocc! — a — beelllllaaaaaaaa
1973 was the only season of his career that he played in over 100 games.. He played from 1963-1974. In Montreal from 1969-1973. 1974 he was on the Giants.
Here is a recording of the PA Announcer in Jarry Park introducing Boccabella..
Interesting aside. In 1991-92, there was a player on a team in the Midwest Junior Hockey League by the name John Boccabella.. Obviously not the same person, as Junior Hockey in Canada is reserved for teenaged players.. I just wonder if there's a connection to the catcher..
Anyway.. That's it for today

Today's card is one I'm glad I have and actually have in duplicate.. 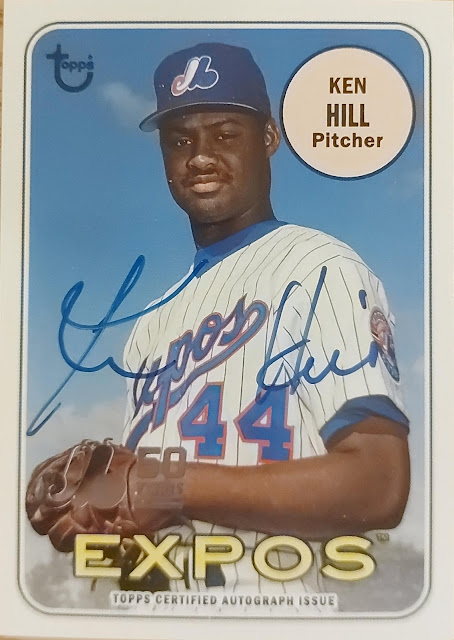 Ken Hill as an Expo.
As I said, I have two copies of this card. Ultimately I'd like to get the insert set of these. 21 cards total and a lot of decent names in there. Steve Rogers, Tim Raines, Andres Galarraga, Randy Johnson, Pedro Martinez, Dennis Martinez..
The base non-autographed insert set is also one I want to complete..

Today's is a case of having two copies because I was going to have them in two spots, but now I'm not sure.. 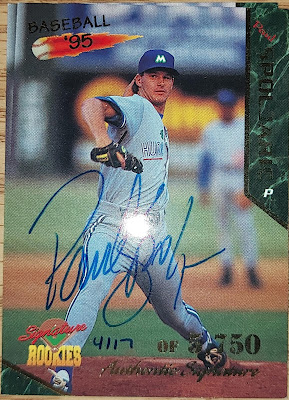 Today's is Paul Spoljaric. The reason I bought two originally was to have one for my Jays collection and one for my Canadians collection. There are some that, if I got autos of them *cough* Vlad Jr *cough* I know I would only really be able to afford/justify one so.. It would be a case of Jays or Canadians..
Anyway, this is a long winded way of saying "Should I keep both copies of this card and do what I originally intended to? Or should I just put the one in the Canadians binder, since this would likely not be displayed in a binder in a Jays collection."
Also.. I just want to comment on the Myrtle Beach Hurricanes uniform that Spoljaric's wearing here. It's nice to see what it looked like, even though I can't really see it straight on like I want to..

I'm going to start by saying I love the 1987 Topps set.. I completed it, and am working on completing the 87 OPC set.

I thought it was cool when they used it in 2017 as an anniversary of the set.. But now... It seems like it's in a set every year.. And I want to show you something as an illustration for how frustrating it could be.. 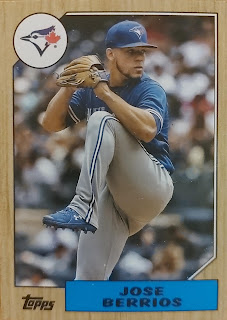 We start with Jose  Berrios. Not too bad.. Nice action photo. I do kind of miss the baseball stitching on the logo, but I know they've gone to this logo for the last couple years, so.. Whatever.. 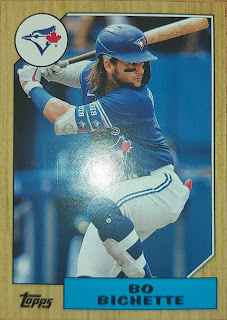 Next we have a Bo mid load up for a swing. Lots of blue in here, with the blue background and the blue uni, but again.. Whatever.. 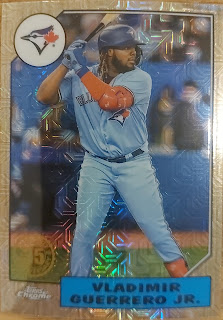 A shiny.. Vlad Jr makes an appearance as a chrome refractor kind of deal. The only debate for me really is if I want to keep it at one or if I want to try for a second to put into my Canadians binder.. 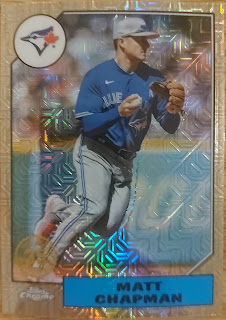 Ok.. Here's where it gets fun...
A Shiny Chapman.. Easy enough to distinguish. 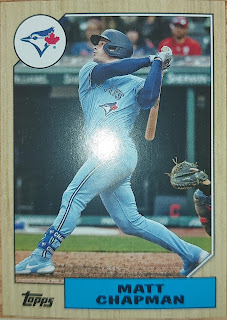 Here we have another Chapman... 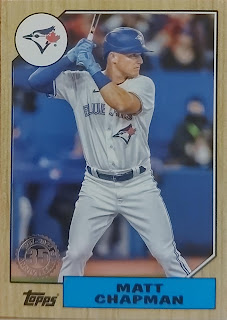 And what's this? A THIRD Chapman??
So I have three Matt Chapman cards in the same design, but different photos thankfully.. Do I know what inserts these are from? Nope..
I think Topps has gone well past the point of beating this horse dead.. They've beat the horse so badly it stopped bleeding and everything is just a slurry...

Cards from a Break

I've mentioned before I'm part of a group called Team Collectors. Obviously, I collect Jays.. I do get Expos cards and the odd Canadian player from the other members, but mainly Jays.

All that being said, there was a break around Christmas. Update and a couple other boxes. I had another member nice enough to pay for my spot for me so I could take part. I received the cards in the mail on Friday, but didn't actually get them in hand until Sunday when I went and checked my box..

I'm not going to show all of them, but I'll show some interesting ones.. 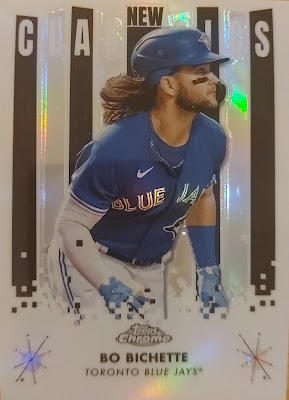 For some reason, I think this is called "New Classics" but of course, the silver/white combo makes it impossible to read.. It's a lot of fill in the blanks, but New Cais makes zero sense.. lol 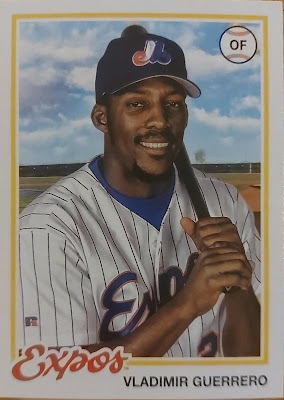 Who doesn't love an Expos card? Here we have a Vlad Sr in 78 style. 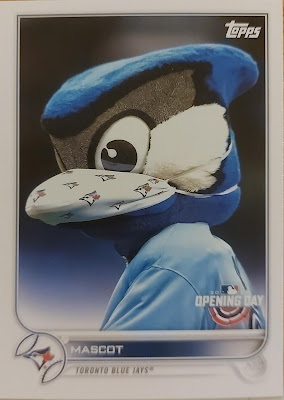 Here is my usual rant about the use of "Mascot" rather than the actual name of the mascot on the card..
If you're tired of reading it, I don't mind if you scroll on..
The Toronto Blue Jays mascot is named Ace. I don't know why they haven't been able to put his name on the cards, but it's annoying. I'd rather not have a card of Ace before seeing Ace listed as "Mascot"
I feel this way about any mascot. They have names.. Put them on the card! 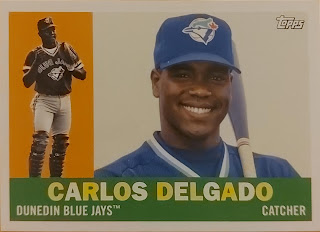 I'm not sure what set this is from, but it's odd to see Carlos listed as a catcher (He came up as a catcher, was moved to LF, then 1B) and as a member of the Dunedin Blue Jays. 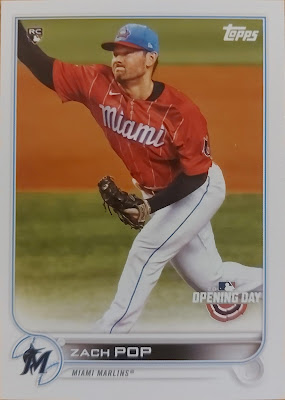 I'm sure you're wondering why this random Marlin is in with my Blue Jays.. Well, it's twofold..
One: He's Canadian. And after this card was released, he became a Blue Jay. 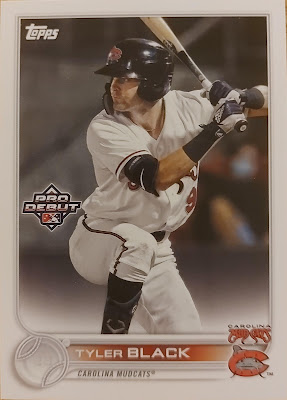 Well, tihs is another non-Blue Jay.. He's another Canadian. At least we know we won't get him mixed up with a different Tyler Black. Especially since he goes by a different name nowadays... 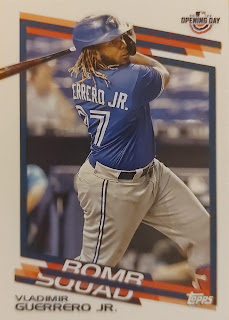 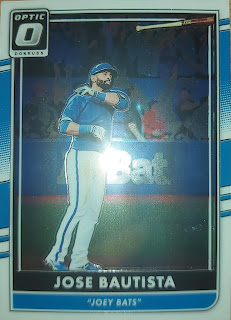 Here we have a bit of a "compare and contrast" exercise.
Panini obviously was able to make a card of the famous Bautista Bat Flip. They even have his nickname. 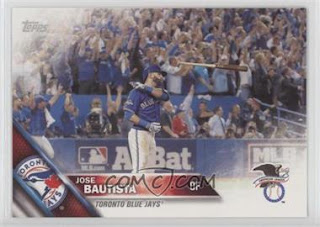 Of course, this is the more popular version. Topps got a lot of mileage out of that image in 2016. I think I prefer the Topps card, though I do like the timing on the Panini version.
Which one do you prefer, dear reader?? Has my constant ranting about the mascot cards gotten annoying? Or do you tune it out?

The first Saturday of 2023 is a card I just recently received.

Kevin Glew from the superb blog Cooperstowners in Canada sent me this card around Christmas. He read my other blog and knows my struggles. Also complimented the fact I was writing to get struggles out there.

Anyway, he contacted me on Twitter saying he had this card and wanted to know if I wanted it.. 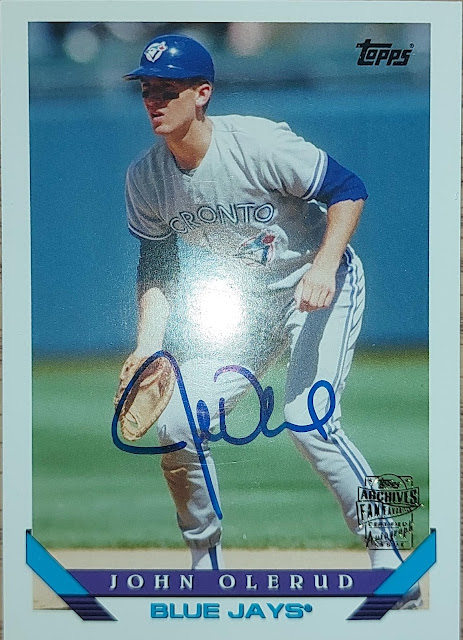 I apologize for the flash glare. I tried a different method to take the scan/photo and it didn't quite work the way I wanted it to..
Anyway, it's a Fan Favorite John Olerud auto.
Olerud went from college to the Majors with the Jays in 1989. We know aboout his massive career year in 1993. I didn't realize he was an All Star exactly twice.. And won three Gold Gloves, all after he was with the Jays.
He spent exactly three games in the minors near the end of his career while he was with the Red Sox.
I have to say he has a really nice signature as well.