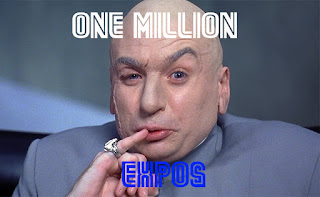 would it surprise anyone if I said thus far the card I have the most copies of is 1988 Donruss Andres Galarraga with 15?

I know that number will increase if I find the cards I know I have from this time frame but can't find.. *ARGH!*

I know I've hit the slower part of this sort.. 1987-1993 because of the number of sets etc I have At the same time, I'm not stressing myself out over it..

I am planning on showing off some cards I've received in the mail soon. I just need to get access to my scanner again..

I finally started getting a little more active on the Trading Card Database.
Saturday I made a trade in person through the Database.

I want to show some of the cards I got in return. 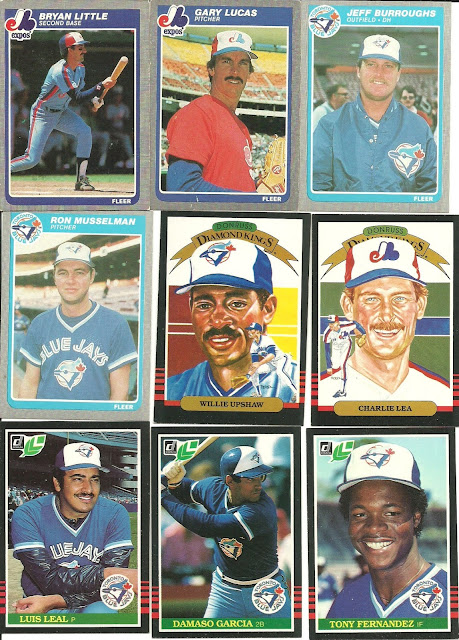 Some nice Jays and Expos from the early 80s.
The Donruss are actually the Leaf releases. 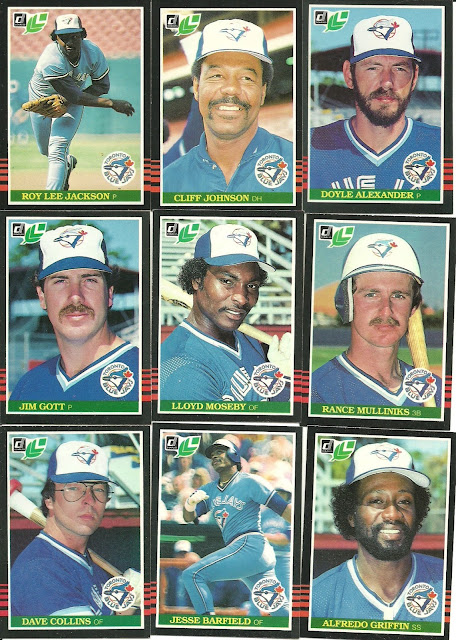 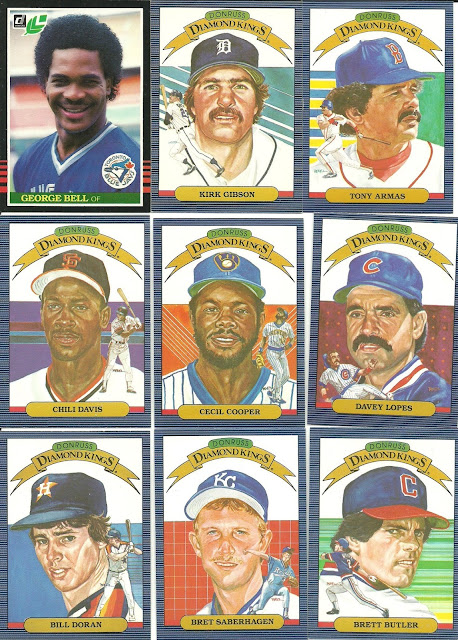 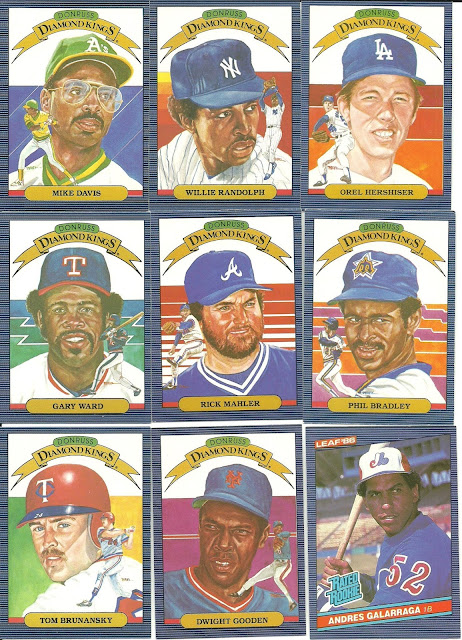 The trade actually came in after I decided to no longer collect the Diamond Kings unless I was collecting the set, but I hadn't had a chance to remove them from my want lists. I may change my mind at some point, as they are still beautiful cards. 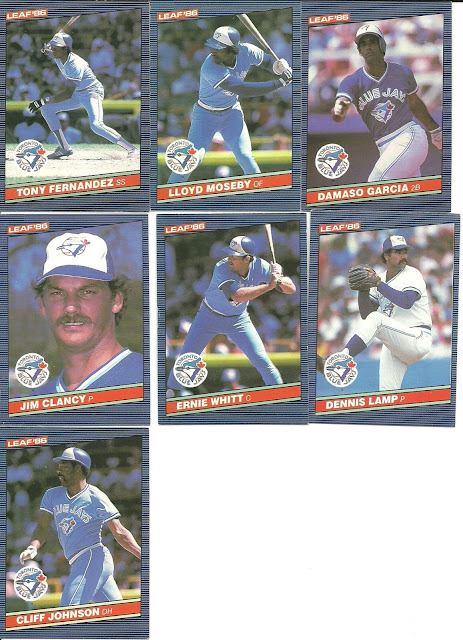 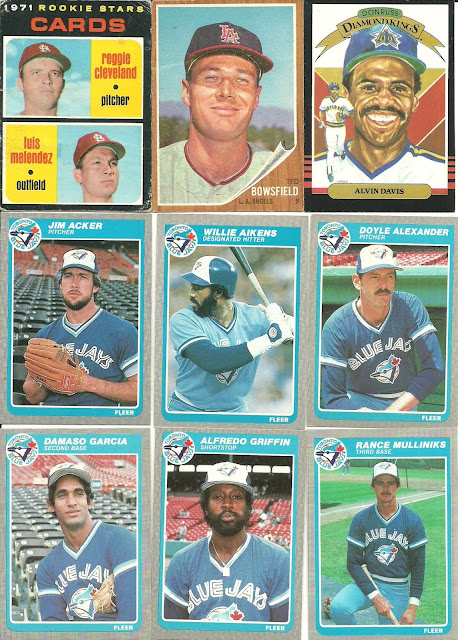 A couple nice older cards as well.. Reggie Cleveland rookie and a Ted Bowsfield card. Both are Canadian born and fit nicely in my binder.

There was more. As I get through the cards, I'll post more most likely.

Thanks for the trade, Sandyrusty!!!

I recently bought a few cards from Firstrow.ca
They had posted a Corey Koskie auto for sale and I mentioned that if I had the cash, I'd buy it.
Because we've done a fair number of transactions (and I'm always willing to talk up a fellow Canadian) he messaged me saying that if I wanted it, he'd hold it for me until I could buy it.

So I found a couple things I wanted and I ordered them. Though, one is for another blogger. 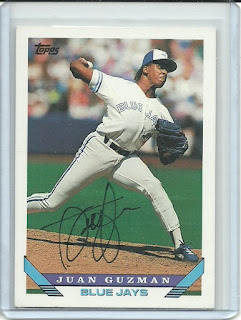 I figured I'd get a Juan Guzman autograph. It was rather inexpensive so I figured why not 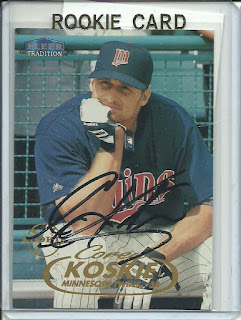 Corey Koskie auto!
This was the card shown and he held for me. It's a beautiful card, isn't it? 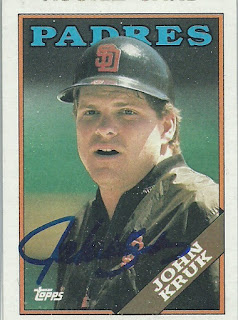 This one is being sent to John Kruk collector Peter Steinberg. I saw this and thought of him right away.. It might not be till the 5th that I can get it out in the mail, but it will be mailed to him.

So this is my purchase from First Row Collectibles.
As always, I'll mention to go check out the website at firstrow.ca

Currently, you can get 50% off card orders. Plus.. The prices are in Canadian funds! Our friends in the US end up getting a bit of a break.
Posted by Mike Matson at 5:11 PM 3 comments:

Well, I want to look at something different today..

The big part of what took me so long to get back into sorting my cards was the volume.. The other thing was trying to track what I had where.. I now see the Trading Card Database has the ability to make multiple collections and move cards between them.. Maybe when I'm bored I'll play around with that function.

But for right now, what I'm doing is this:

I have a spreadsheet open and set it up like this 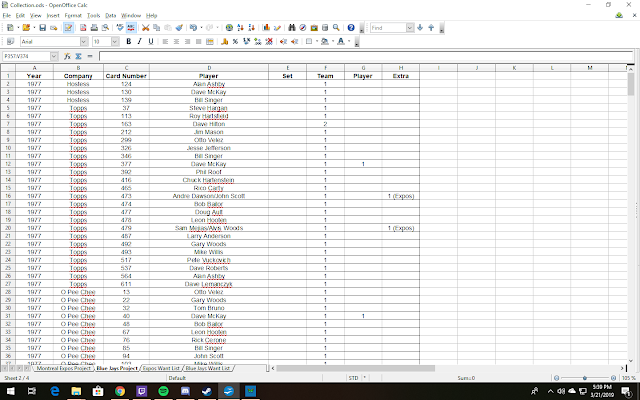 So I'll enter the year, the manufacturer, the card number, the player(s) and then depending on where it goes, check off one or more of the boxes with the number of cards.

I'm doing this for both the Jays and the Expos, though the Expos is still my million project. For the Jays, I'm mainly using the Set, Team, and Player boxes. I have the two 1977 cards in Extra because they feature a Jay and an Expo.

After I finish that, I do a print request for the set I'm working on..

And save them here.. 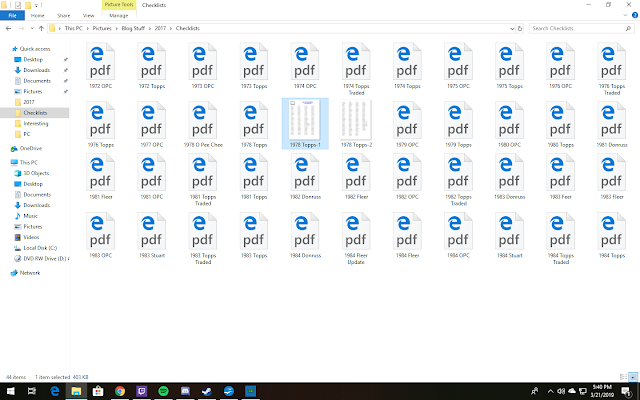 What I'll do afterward is go through these and recreate my want list completely.. I'll set it up as I have above, but the check or (1) will be what category I need that card for.

In a way, it may seem like a lot of work, and really it kind of is.. But what is worth doing is worth overthinking and overdoing.. lol

The other reason I'm doing it this way is if I get overwhelmed part way through again, I can pick it up where I left off rather than trying to remember what goes where..

I know this is a boring non-card post, but I wanted to give a little insight on how I'm organizing this time around.

Plus I'll do a little teaser:

I bought a few cards and they came in.. I'll show them off tomorrow..
Though one I'll have to hold off, since it's going to head Peter Steinberg's way.
Posted by Mike Matson at 2:54 PM 3 comments:

As I mentioned before, I'm working on focusing my collections in a certain way.

Buttons, Pogs, Discs, Coins..
Sets I don't really want to collect but felt like I needed to..
The main one I'm thinking is a casualty here is the 1990 Fleer Canadian. There may be a couple others.

This last one hurts because I really love the look of them, but I can't see myself getting them, especially when I need three copies in some cases.

I just did a little order on Check Out My Cards for my birthday.. I really couldn't afford it, but I did it anyway.. 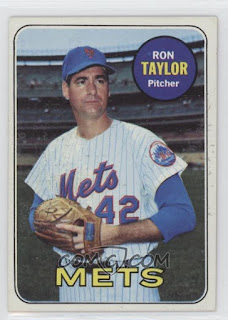 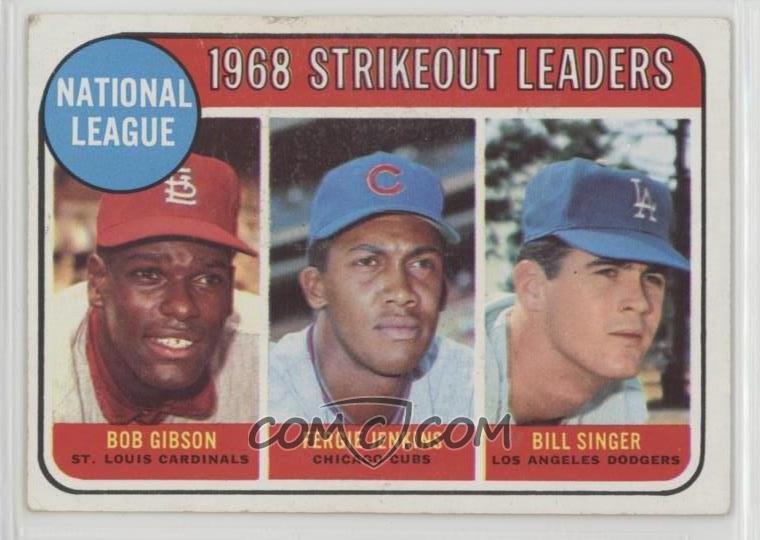