I've mentioned before that one goal I have as part of my Canadian born player collection is to get an autographed card of as many as possible.

I was recently helped on that with a Ryan Dempster card 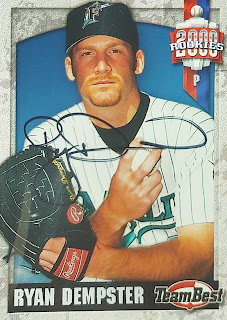 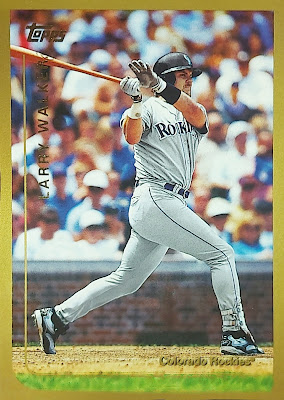 I also received this Walker. It's a larger card but I won't turn down a Walker!
I did find a place that could help with a lot of the players I'm looking for, but I don't have the money right now. The Canadian Baseball Hall of Fame has balls, bats, cards, and other things autographed by inductees.
The cheapest card is inductee and current Phillies manager Rob Thomson for $10 CDN. The most expensive of the cards is Walker at $50 CDN.

All Time Team Canada - The Pitchers

Yesterday was the batter side.. Today is the pitching staff.

I think a couple of these are no-brainers.. This may be the part I get more engagement with.. Who knows?

It's natural that the Ace of this staff would be the first Hall of Famer. From Chatham, Ontario, Fergie played for the Phillies, Cubs, Red Sox, and Rangers.

He is a member of the Canadian Baseball HOF and Cooperstown. He also has a statue outside Wrigley Field (incidentally, I missed the Topps Now card of that.. I would like a copy)

Second on the staff is fellow former Cub, Ryan Dempster.

From Sechelt, BC, he played for the Marlins, Reds, Cubs, Rangers, and Red Sox. He actually has the second most wins by a Canadian born pitcher. Fergie, obviously, is First.

Third on the staff is Russ Ford from Brandon, Manitoba. He played for the Yankees and the Federal League Buffalo team.

He's From Victoria BC and played for the A's, Cubs, and Rangers..

Kirk McCaskill
The fifth starter is Kirk McCaskill from Kapuskasing Ontario
He played for the Angels and White Sox. He did bounce between the rotation and bullpen, but for my purposes, he's a starter because of the 380 games he played in, he started 242, not being a full time reliever until the end of his career.
Now... The Bullpen

Rheal Cormier
First reliever is Rheal Cormier from Moncton New Brunswick. One of my favourite error cards is one of his.. 1993 Upper Deck has Moncton in BC..
He played for Philadelphia, Montreal, Boston, St Louis, and Cincinnati.
He's second in games pitched by a Canadian, behind another player on this list

Reggie Cleveland
Next is Reggie Cleveland. Born in Swift Current, Saskatchewan, he played for the Red Sox, Cardinals, Rangers, and Brewers.
Honestly, it would be twisting my rubber arm is someone was able to argue he should be in the rotation..

Paul Quantrill
Next is Paul Quantrill. He was born in London, Ontario, but lived in Port Hope, ON.
He pitched for the Red Sox, Blue Jays, Phillies, Dodgers, Yankees, Padres, and Marlins.
He holds the record of pitching appearances by a Canadian born player, playing in 841 games.
Some of you may have heard of his son, Cal...

Jesse Crain
Next out of the pen is Toronto's Jesse Crain
He played for the Twins and White Sox.

Eric Gagne
Next is Eric Gagne from Montreal, Quebec.
He played for the Dodgers, Rangers, Red Sox, and Brewers.
Obviously remembered for his dominance out of the Bullpen for the Dodgers, (His nickname was Game Over) but injured his knee and then his arm..
He is the all time leader for saves by a Canadian.

John Hiller
Another Toronto, born player, John Hiller pitched for the Tigers from 1965-1980. He did miss two seasons due to a heart attack and the subsequent recovery.
He is third on the list of saves by a Canadian
Now, This one I kind of expect more argument on. I did leave out some good pitchers, like Dick Fowler, Phil Marchildon, John Axford, Ron Taylor (though he could be the team trainer!) and others.
So. What do you think of this list? Good? Bad? I should jump off the nearest tall building? Give me your thoughts. There are a couple I could be swayed on..

All Time Team Canada - The Batters

I had an idea that, honestly, would have been better suited for a week ago today.

I've wanted to do this both as a blog post and in a video game for a while.. Make up a team of all Canadian players from all eras and see what kind of team I could make..

Some areas are very thin. For example, there are two players who had long careers as catchers. For a decent 2B and SS I had to pluck someone from the 1890s. First base and Outfield are stacked.

I've left current players off the list aside from one just because most of the guys I've considered haven't had much of a career so far, or it's too early to rank them in the Top Tier.

It's a 25 man roster. 5 Starting Pitchers, 6 Relief Pitchers, a Starting 9 and DH, and 5 bench players. I also have a Canadian manager, but it might surprise..

Anyway, enough explanation. Let's get on with it..

Bill Watkins.
The Brantford Ontario native was a player and a manager. He transitioned to managing full time after a near fatal beaning.
He managed the Detroit Wolverines, the Kansas City Cowboys, St. Louis Browns, and Pittsburgh Pirates.
His overall record was 452-444
Catcher

Russell Martin
Born in East York, raised in Montreal.
Played for the Dodgers, Pirates, Yankees, and Blue Jays.
First Base

Justin Morneau
Born in New Westminster BC
The first really difficult option though some were easy to discount.
Morneau played for the Twins, Pirates, Rockies, and White Sox.
Second Base

Pop Smith
Though his stats aren't the best, he's the longest-serving player at 2B. He was born in Digby Nova Scotia and settled in Boston in the 1870s.
He played for 12 years between 1880-1891.
Third Base

Corey Koskie
Born in Anola, Manitoba.
Played for the Twins, Blue Jays, and Brewers. I think his career would have been better if he didn't suffer that concussion in 2006.
Shortstop 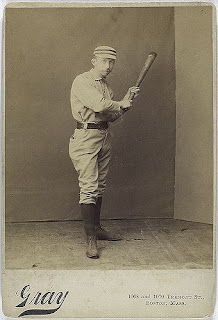 Arthur Irwin
Shortstop was another thin position for the Canadians in this list..
He was born in Toronto
He played for Worcester, Providence, Philadelphia, Washington, and Boston between 1880-1894
He's probably better known for off-field things. He pioneered fielding gloves. After his playing days, he managed, scouted, and owned teams. He is believed to have jumped to his death into the Atlantic Ocean, and was found out to have a double life, with families in New York and in Boston.
Left Fielder

George Selkirk
The outfield was the most difficult part to figure out.
Born in Huntsville, Ontario, Selkirk was nicknamed Twinkletoes due to the way he ran. He also took over in the outfield for Babe Ruth, including taking his uniform number with the Yankees.
He played from 1934-1942. He transitioned to Managing and front office duties in the minor leagues and with the Washington Senators after being released after the War.
Centre Field

Terry Puhl
Born in Melville Saskatchewan, Puhl played for the Astros and the Royals.
What started out as a two year trial for Puhl ended up being a 15 year career.
He did have some injury troubles, but it also seemed the Astros wanted him to be something he wasn't. Rather than letting him be a line drive hitter in the vein of Tony Gwynn or Wade Boggs, they wanted him to hit for power.
He's been inducted into the Saskatchewan Sports HOF, Canadian Baseball HOF, and Texas Baseball HOF.
Right Fielder 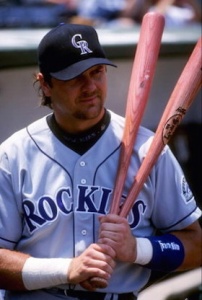 Larry Walker
Born in Maple Ridge BC, he is the only Canadian batter in Cooperstown.
He played for the Expos, Rockies, and Cardinals.
Things could have been much different. He was interested in getting into hockey as a goalie, and tried out for the Regina Pats of the WHL, but was selected to play in Swift Current instead. He went home and concentrated on baseball.
Designated Hitter

Matt Stairs
Born in Saint John New Brunswick, he makes our DH. 265 Homers has him second all time.
Fun fact: He has two nicknames... Wonder Hamster and Newf.. I get the first, but not the second.. Unless it's the classic mixup of St John/St John's.
He played for half the league..
Bench

George Gibson - London Ontario
I suppose I could have made him a player/manager
So, this is my position player list.
Do you agree? Would you move people around? Am I insane?
Next time will be my pitching staff.. If you want to take some guesses there, be my guest

Well, this is a holiday in the area known as Canada's pants.. Our holiday was on Friday. I'll admit this last month has been very rough for me. Moving (I still have to get stuff organized) and in an almost constant state of depression or anxiety hasn't really helped me get anything done.

I have a COMC order coming.... In November.... Since it seems the extended wait times are still a thing... 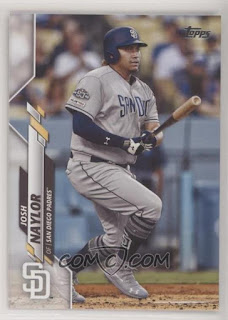 Josh Naylor. I also have a couple coming of his brother. 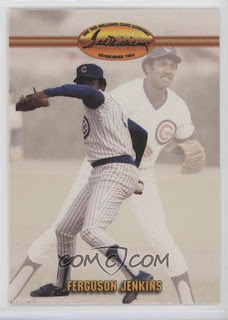 A Fergie Jenkins card I hadn't seen before. Honestly, this one would look good signed, I think. 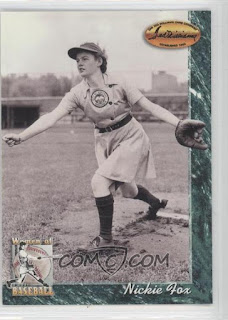 Nickie Fox. Canadian who played in the All American Girls Professional Baseball League. There seemed to  be a number of players from Canada. 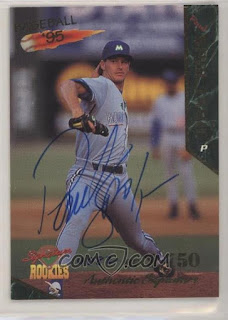 A Paul Spoljaric autograph. This will fit nicely into my Canadians side project of getting autographed cards of as many Canadian born players as possible 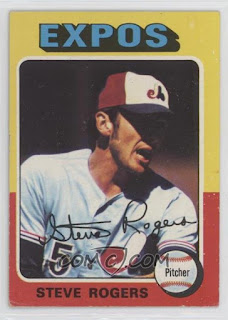 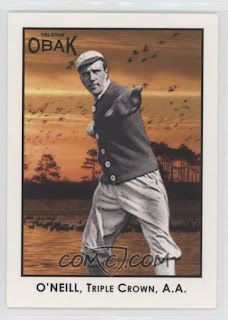 And Tip O'Neill.
Fun fact. The former US House of Representatives Tip O'Neill was named after the Canadian born ballplayer..
So here's a few cards I have coming to me in a few months.. I apologize for the length of time between posts and the depression.