There's Loot in Them Thar Lockers!

Well, as many people know, I was in a rough place for about a month or so. Doing much better now since I'm working regularly again. I was able to sneak in an order for a Loot Locker before they were sent out at the end of September.

I received it yesterday after getting home from the Emergency Room (I had a bubble on my leg for a few days that I popped.. It was still weeping for a day or so afterwards, so I wanted to get it checked to make sure it wasn't infected) 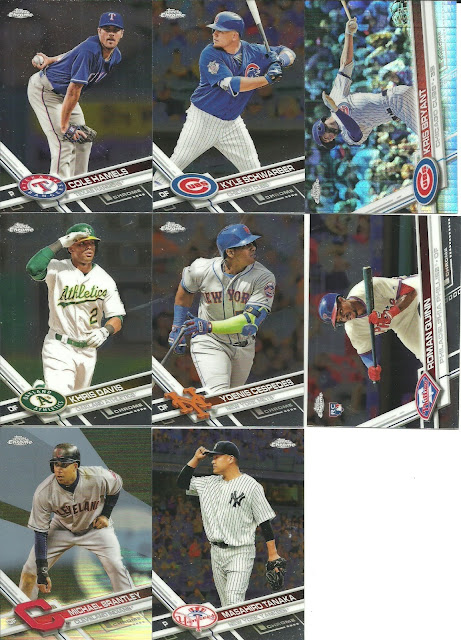 One thing I like about the Loot Lockers is that it's generally a way of getting cards I normally don't have access to, even if they're not always things I collect. Chrome is something I can take or leave.
Half of these cards represent teams in the Postseason. I would have loved to see the Yankees lose to the Twins, but no such luck.
Got a couple of the Golden Boys from over the last couple years with Schwarber and Bryant. 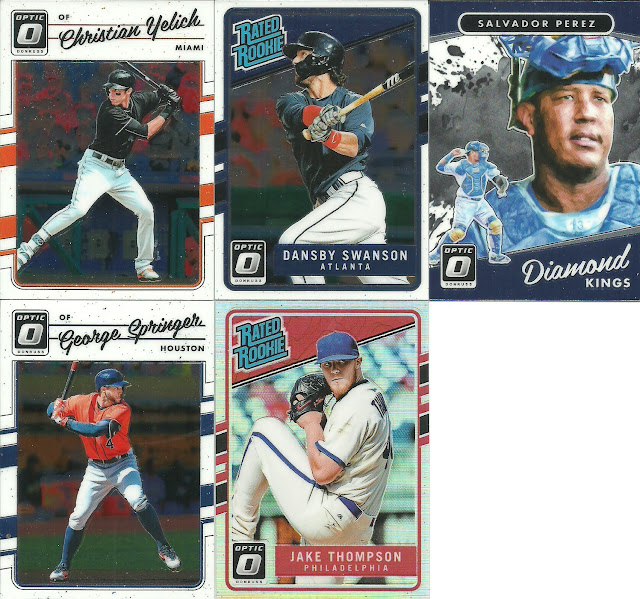 Speaking of Chrome... It's Donruss Chro.... I mean Optic.. For some reason... lol
The Yelich and Springer cards aren't too bad. The Perez Diamond Kings card is nice, but not something I really think of when I hear "Diamond Kings" if that makes sense..
Another one of the Golden Boys here with Dansby Swanson.. 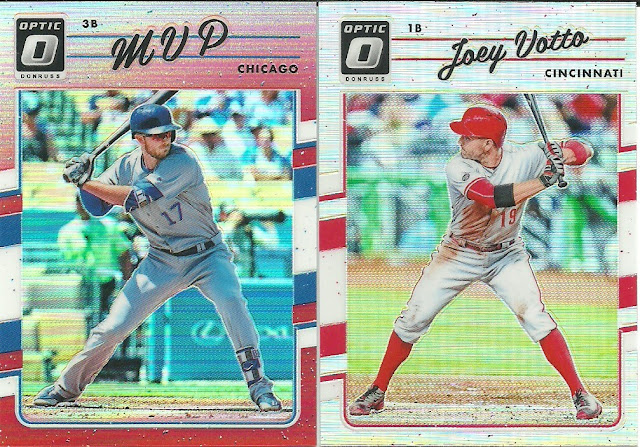 I separated these two because they were a little different.. Votto I collect. Another Bryant, but this one is a serial numbered card to 99.. 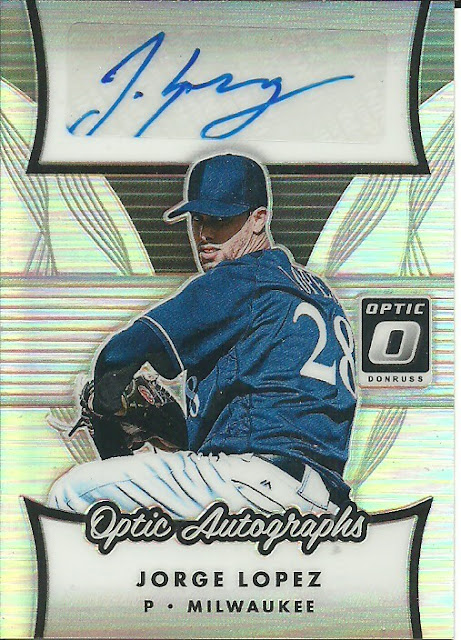 And an autographed card! I can't recall actually pulling an autographed card before. Though if I think about it, I'll likely come up with one I did.. Oh right.. Chris Davis Auto/Patch... lol
But Jorge Lopez.. Pitcher for Milwaukee... Haven't heard of him before.. I wonder if Tony at Off Hiatus knows him.. 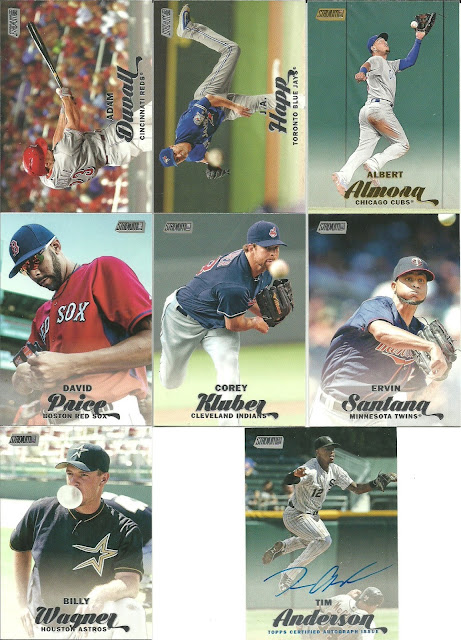 Stadium Club!
I really like these cards. But again, it's a set that just isn't around here.. I'd have to order them online and that's not always palatable.
We have the Postseason Choker himself in David Price. Billy Wagner, who according to the back, is a natural righty but taught himself to throw left handed after breaking his arm.
That Almora almost looks like a parallel card (We all know Topps LOVES the parallels!!) 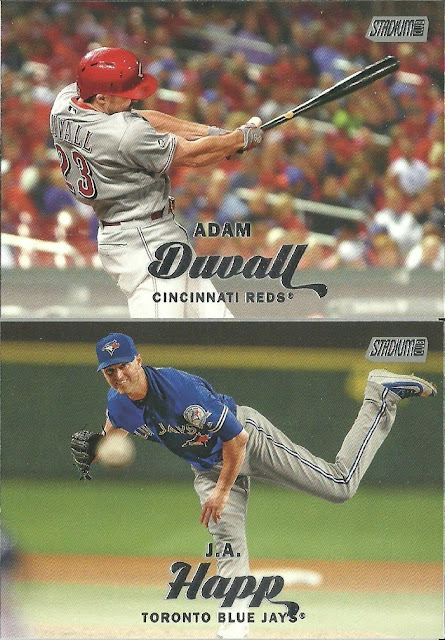 I flipped these ones here to show them in their natural habitat.
If I had them arranged the other way, it could look like Happ was throwing to Duvall.
Happ *ahem* Happily joins my Jays binder. 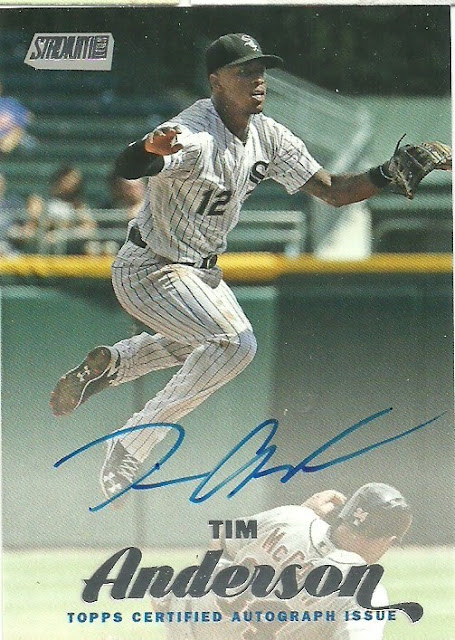 What's this? Another autographed card... This time on card.. By Tim Anderson.
I watched the odd White Sox game since I have WGN on satellite. He looks to be an interesting player. Not really sure it fits my collections though. 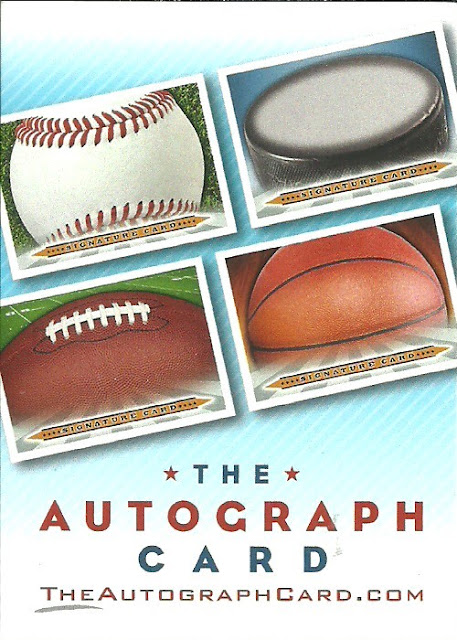 There was also a package of Autograph cards.. I guess the idea with these is to send them or bring them to a player you want to get an autograph from and they would be able to sign this card if you don't have a card of them, or if you just want to be different, or whatever else..

It's an interesting concept. 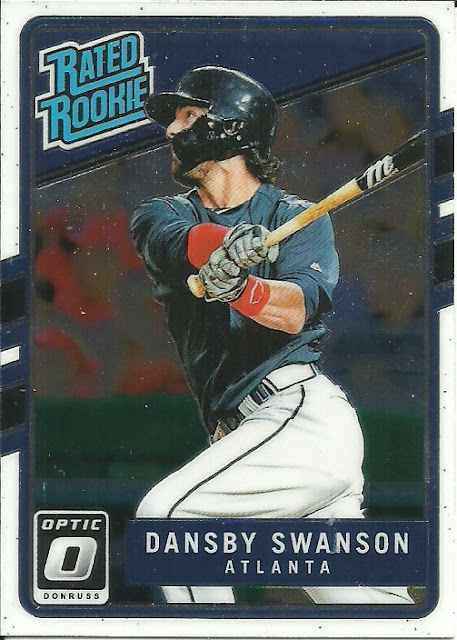 And just because, here's Dansby again.. Because Dansby..