I showed the front of a pocket schedule I received from Curtis at the Autograph Blog recently as an "Anxiety sucks pick me up" along with the team sets he sent and the Randy Johnson rookie.

I decided today I was going to show the rest of that pocket schedule.

Really, they're in no particular order.. It's one of those accordion schedules.

The usual "Come to the ballpark with your group" stuff here.
In Canada, we have two "national" weekly lotteries. The 6-49 and the Lotto Max.
I could probably write a long, boring history of lotteries in Canada, but this is a card blog..

Season tickets, ticket prices, and 10 game packs.
We also have an ad for Boston Pizza. It's kind of funny.. Whenever Boston is in Toronto for a series, the ad for Boston Pizza at the Dome always scratches out the "Boston" part and has "Toronto" written on top.

The season schedule. I was thrown off a little bit when looking at it because I haven't really been keeping up with what was going on with the American Association.. I had to look up where Cleburne was. I also saw Laredo listed, but only in May.. In June, I see Texas.

Looking into it, Laredo didn't field a team for the 2017 season. They were replaced with the Salina Stockade, a stopgap team since 2018 brings the Chicago Dogs..
The "Texas" listed is the Texas AirHogs. They were known as the Grand Prairie AirHogs before.

A bar ad.. What a surprise for a Baseball schedule.
I do need to make one more comment here.. On the bottom of that Growler Bar ad, it has "18+ Enjoy Responsibly"
The Legal Drinking age is set by the Provinces. Quebec and most of the Prairies are 18, I believe. Ontario is 19. I'm not sure about the Maritimes or British Columbia. I do remember that I was asked if I wanted alcohol when I was at an Olive Garden in Edmonton when I was 16 or 17 lol. My dad let them know that if they served me, they'd be in trouble since I was a minor. 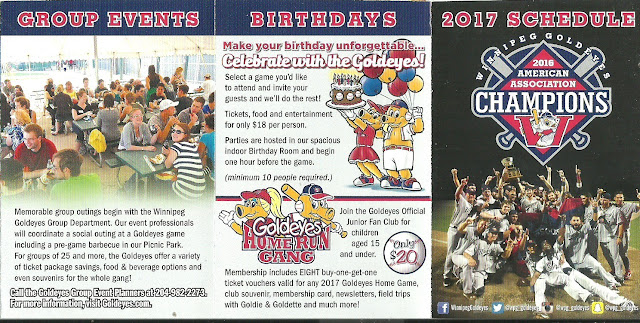 Group events.. Birthday at the Ballpark.. I couldn't do that since my birthday is in April. I could theoretically go to a Jays game this year though..
And the last panel showing is the front of the thing when folded. 2016 American Association Champions Winnipeg Goldeyes!

I don't know.. I may show the odd thing like this again.. I seem to come up with random things sometimes..
Posted by Mike Matson at 1:11 PM