A Trade and Something Unearthed from my Collection

While I keep saying I want to reorganize my collection, I keep getting trade requests on the Trading Card Database.. And silly me, rather than saying "Can we hold on for a couple weeks while I verify everything again?" I keep hitting that accept button (after going through and making sure I have the cards the person wants)

Of course, an added wrinkle of a light cash flow right now makes it tougher for me to get packages out.. (Next week, I hope!!!)

All that said, I received a package in the mail from one of those partners. jlcre2003 sent a nice little pile of cards.. 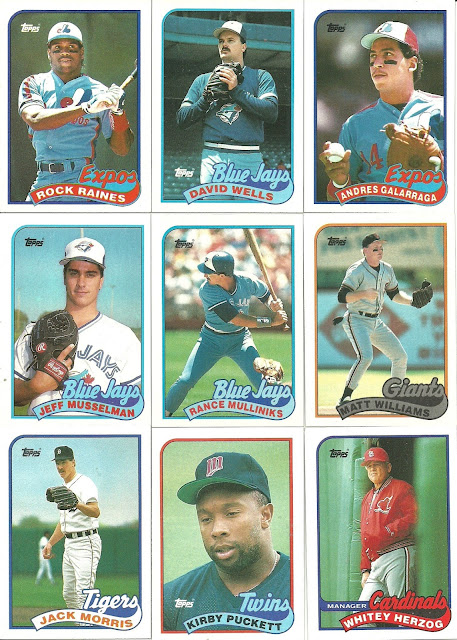 Some 1989 cards for the set. I think a couple might be for the team binders, though I'm not sure.. 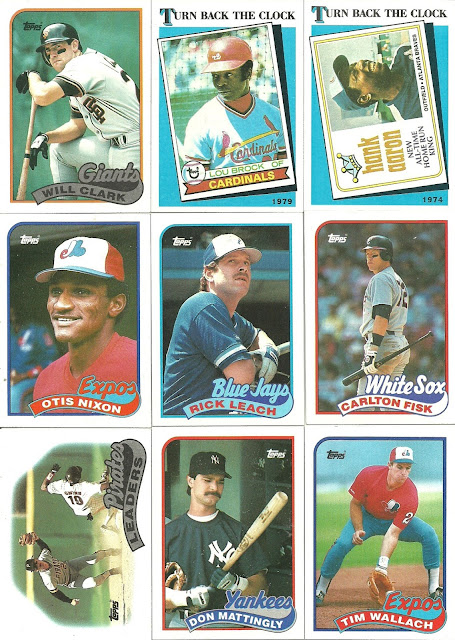 More 1989s! I miss those Team Leaders cards..
There's a Batrack card as well disguised as a Don Mattingly card.
I was never really a fan of the Expos red uniforms.. Much like I don't care for the Jays' red uniform. 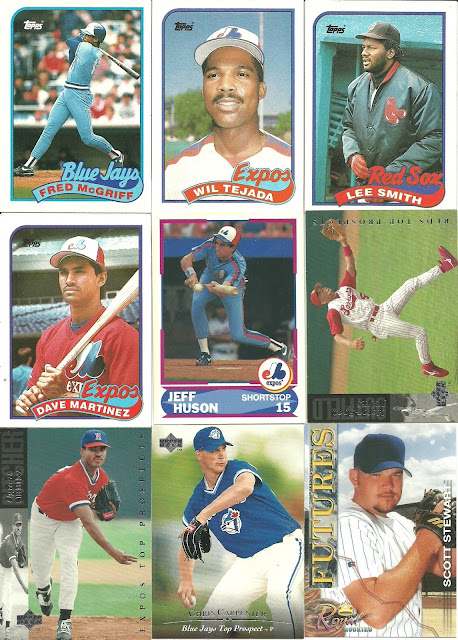 One of these was a Cincinnati Reds minor leaguer card.. I had to get it though, just for the guy's name... Motor-Boat Jones... Dude never made it above Double A. He's Pictured here as a Chattanooga Lookout, but it's one of those evocative Minor League Names..
Two of the other minor league cards here have guys we've seen in the Majors: Chris Carpenter and Ugueth Urbina. 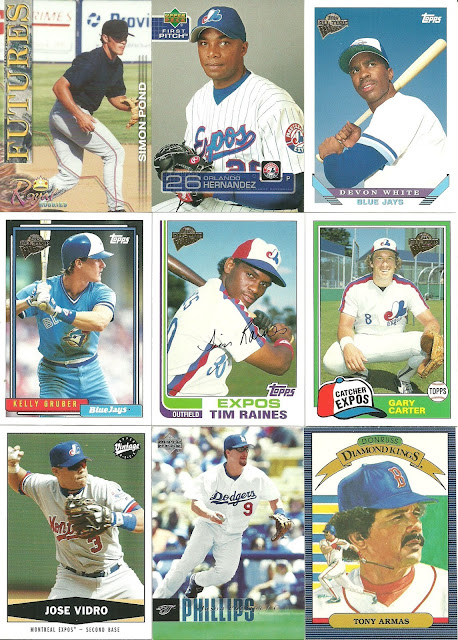 El Duque as an Expo????? You'd think I'd remember this....
Turns out... Yes.. He was an Expo.. He was traded by the White Sox with Rocky Biddle and Jeff Liefer for a minor leaguer and Bartolo Colon. The reason I don't remember him as an Expo? He was injured the whole 2003 season, when he was on the team. He had a couple outings in Brevard County, but was a Free Agent after the season.
Some Fan (ugh) Favorites.. (Sorry.. That looks odd)
Devon White! Kelly Gruber! Tim Raines! Gary Carter! Though, that Gruber looks weird since they didn't wear that style uniform in 1992..
Jason Phillips is a Phantom Jay... Shown as a Dodger, but the logos show Jays.. 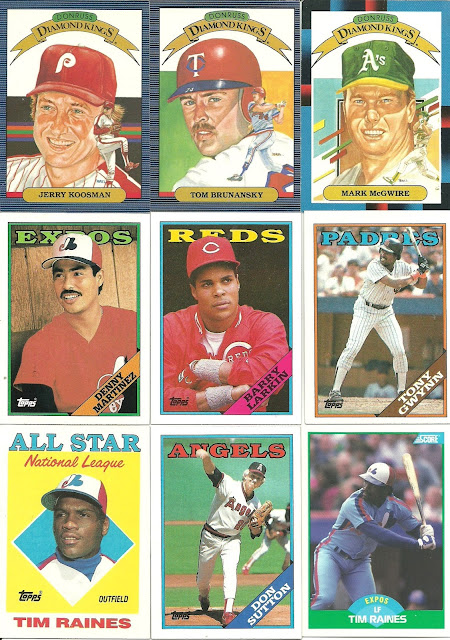 Diamond Kings.. Love them.
Some 1988 Topps I needed as well.
It's odd seeing "Denny" Martinez, though that's what he went by for years... 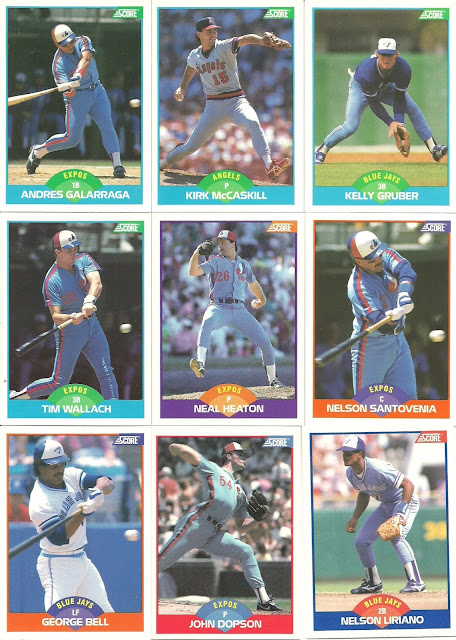 Some 1989 Score cards here.. Mainly Expos, but a couple Jays I needed and a Kirk McCaskill. 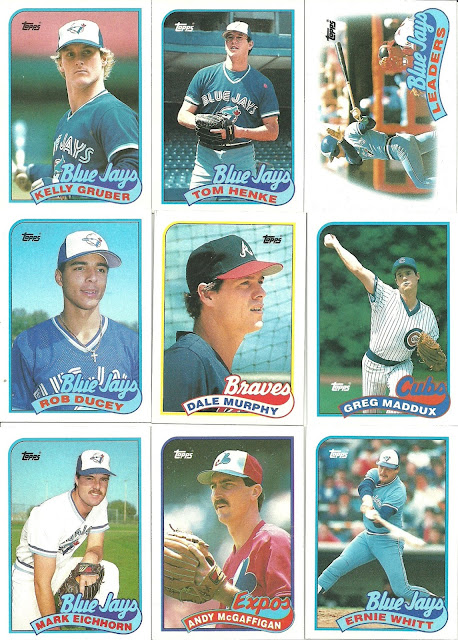 Some more 1989 Topps cards. Rob Ducey, I think is the second of three I need.
Every time I see Ernie Whitt, I think of the parody song "Arrivederci Baltimore" done on one of the Blue Jays Albums in the late 80s and early 90s..
"Whitt gets hits/Kelly Gruber spits/Who's these twits?/And we'll say Baltimore!"
(Of course, Baltimore is pronounced in the same style of "That's Amore") 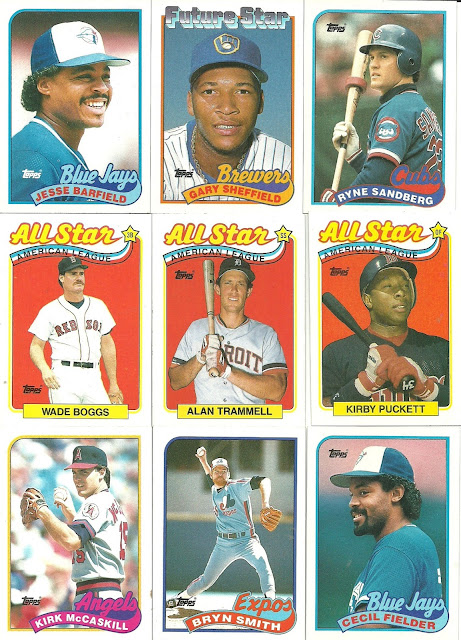 A final batch of 1989s.. Again, I think some are for the team/Canadians binder, but I'll figure out that soon enough..

Now, On Twitter I showed off a card I found that my parents got me years ago.. 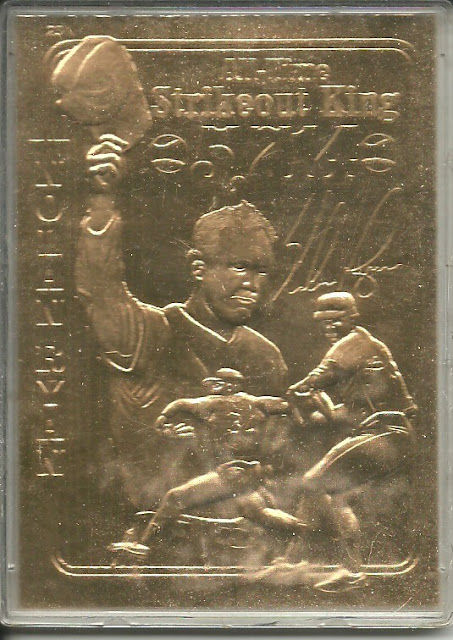 Well, today I brought out something else I have lying around in my room and scanned.. 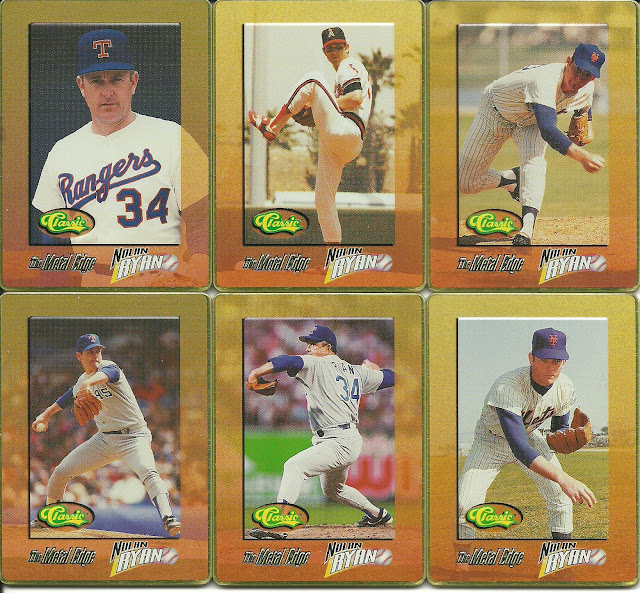 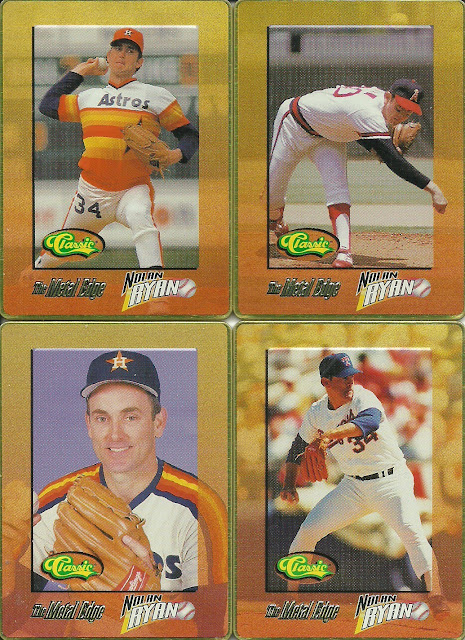 It's a 10 metal card set by Classic honouring Nolan Ryan's career. According to the Certificate of Authenticity, I got set 4458/14950

I thought these were cool. My parents got them for me in the 1990s. I don't remember where we got them from, but I think it was something mail order..

That's it for today... I might have more to show tomorrow.. I have a couple things I want to show off, so... I may do that with a Bus Driving Adventure I had earlier this week...