Well, I needed to get some stuff today and rather than going all over the city using transit, I went to WalMart. One thing I picked up was a repack. The Spring Fever repacks are still sitting here, so I bought one.

Basically the rest of what was available was Series 1 and 2 of flagship and some packs of Bowman Platinum. Since I'm not overly sure if I want to collect the flagship set and Bowman doesn't interest me... Repack it was! 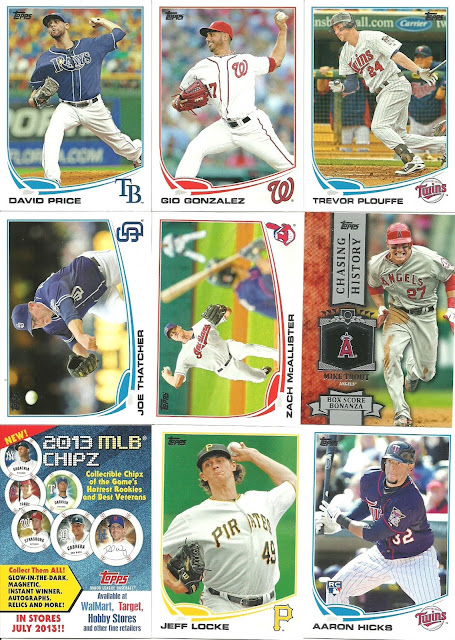 I believe these are 2013.. I included one of the ads that were inserted in with the cards. The other side was an ad for the Big League Minis. 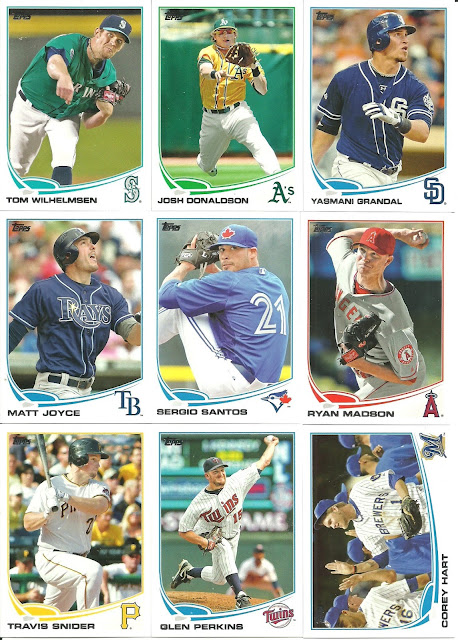 A former, a current, and a future Jay all here.
Former in Travis Snider. I know there were many people upset when Snider was traded because they felt he could have been a good player..
Current for the time, Sergio Santos was one of those guys that would either be really good.. Or really really bad.. He hasn't pitched professionally since 2015 according to Baseball Reference
Josh Donaldson shows off at Third as an A.. 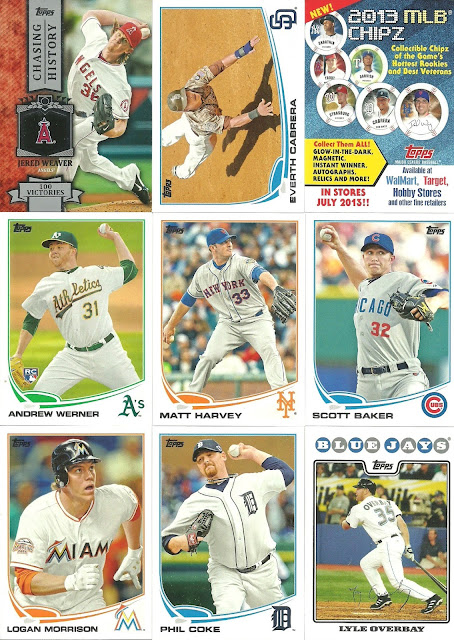 OOps.. I guess I put two of them in.. lol.. Same side too..
I had never seen the Chipz before..
Lyle Overbay makes an appearance as an Angry Jay.. 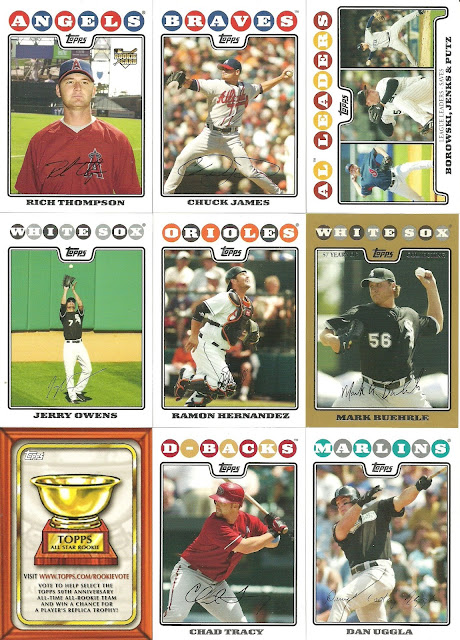 Some 2008 Topps.. This time it is a Rookie Cup contest..
"Help Select the Topps 50th Anniversary All Time All Rookie Team and win a chance for a Player's replica trophy!"
A future Jay in Mark Buehrle and a former Expo in Chad Tracy. I find it interesting that Topps used "D-Backs" on the card for the Team name.

Upper Deck Masterpieces.. I have to say I love the cards and it would be a set I'd consider collecting if I could ever find them..
Anthony Gose and Mark DeRosa make appearances as Jays here.
Lonnie Chisenhall in a throwback uniform. For a while I was considering collecting cards with players in Throwback/Negro Leagues Tribute uniforms, but like stadium cards, they're hard to find easily. 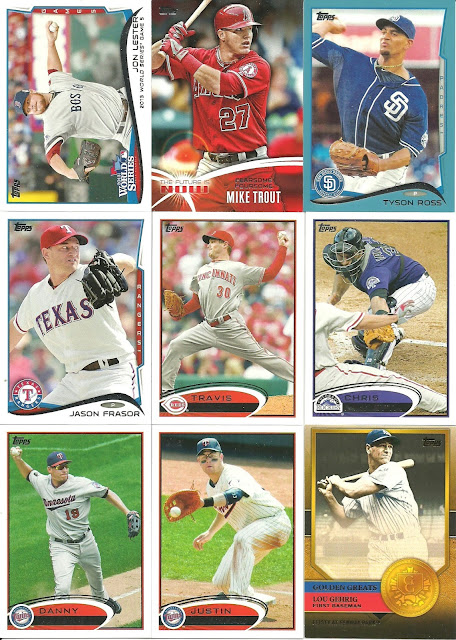 I know that Morneau is a duplicate.
I find it interesting how the last name doesn't show on the 2012 scans. I think it's due to the silver reflecting too much..
Jason Frasor makes an appearance.. I forgot he was a Ranger.. Or should I say a Texas?
Danny Valencia here as well.. Almost looks like he's throwing over to Morneau, no? 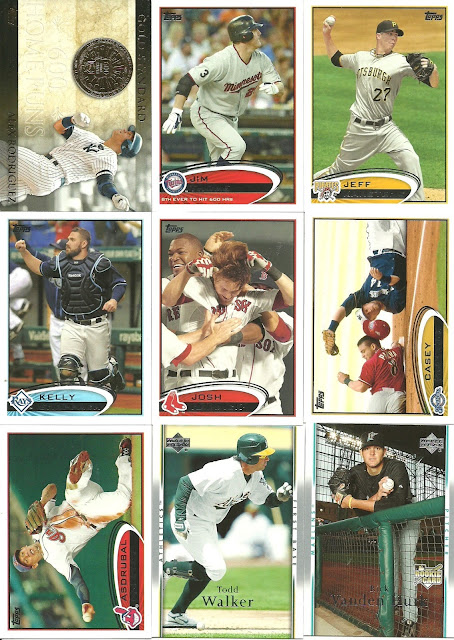 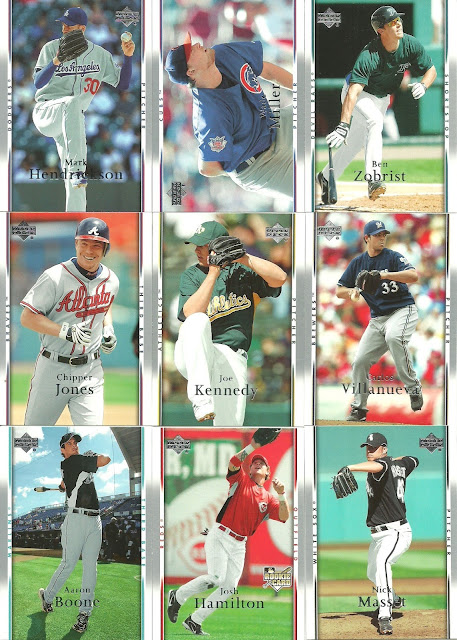 Hey a Josh Hamilton rookie card.. lol
We're into the 2007 Upper Deck now.. It's a set I don't mind, but at the same time, not really one I want to collect. If that makes any sense whatsoever.. 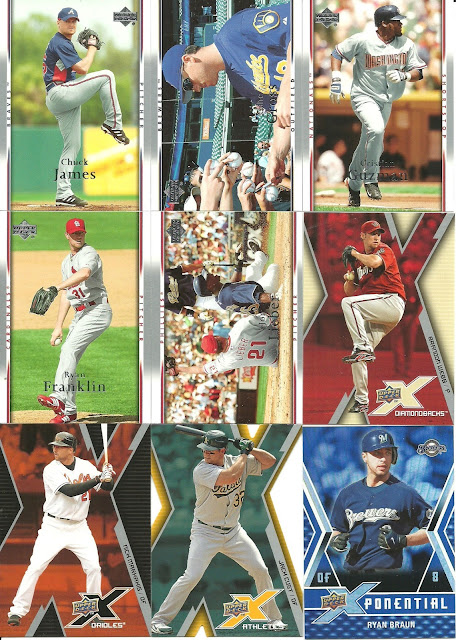 Upper Deck X.. I had a couple of these, but never saw a pack before. The Braun is one of those raised edge cards. The Cust beside it is a die-cut card..

Koji Uehara rookie card.. I forgot he was an Oriole..
The Seager thing on the end was an extra "chase" card separate from the packs in the box. One side is Seager, the other is Gary Sanchez.

Aside from the Jays these cards will be up for grabs..

If you see something that catches your interest... Let me know! We can work out something I'm sure..

OH... One more thing.. There was one more pack in the box.. It was a Panini Triple Play... I checked to see what was in it and basically threw it out right away.. Because nobody really wants to see them..
Posted by Mike Matson at 3:54 PM