The probably not much anticipated return of this series.

Hello again.. I have energy and the feeling of writing, so I figured why not do another one of these.

I had to go back through the archives and see who I have done so far. After finding I haven't covered this guy yet, today Is his day.. 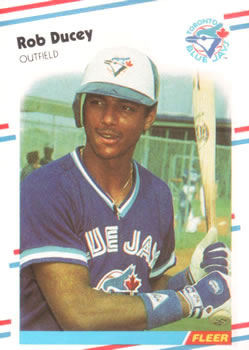 Rob Ducey was born in Toronto, Ontario and lived in Cambridge.
He was signed as a free agent by the Jays in 1984.

He started his professional career in Medicine Hat, Alberta for the Medicine Hat Blue Jays, where he won League MVP. Because of that, he rose through the minors and made his Major League debut on May 1, 1987.

An interesting note: His first career home run came against the Baltimore Orioles in a game the Jays set the record for most home runs in a game with 10. 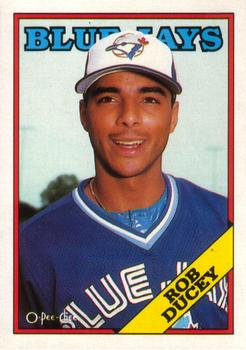 From 1987 to 1992, he bounced between Toronto and Syracuse, not quite being able to crack the outfields of the time. In 1987, for example, the Jays had what many fans considered the best outfield in George Bell, Lloyd Moseby, and Jesse Barfield. After Barfield was traded, Junior Felix took over. 1990 saw Mookie Wilson in Centre, and 1991 and 1992 saw Candy Maldonado, Devon White, and Joe Carter.
As a result, he was traded at the deadline in 1992 with Greg Myers to California for Mark Eichhorn's return. 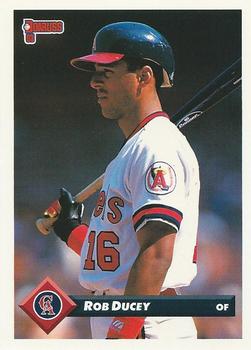 At the end of 1992, he was released by the Angels, signing with the Rangers, again bouncing between the Majors and Triple A. this time Oklahoma City.

He would return to the Majors, signing with Seattle in 1997.

He would sign with the Phillies in 1999, then be traded to and from Toronto in separate deals.
July 26, 2000: Traded to the Blue Jays for a Player to be Named Later. (John Sneed)
August 7, 2000 : Traded to the Phillies to complete a deal for Mickey Morandini. 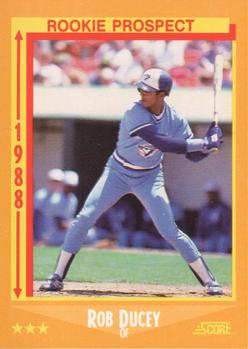 2001 saw him released by the Phillies on June 7th, then picked up by the Montreal Expos June 12th.
In doing so, he was the second Canadian Born player to start his career with the Blue Jays and end his career with the Expos.
He also became one of four Canadian Born players to play for both the Jays and Expos. The others are Denis Boucher, Matt Stairs, and Shawn Hill. 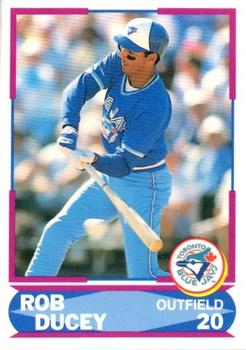 His playing career ended in 2002 with the Adirondack Lumberjacks of the North Eastern League.

Following his playing days, he started scouting and coaching.

He is currently listed as the Hitting Coach for the Florida State League Clearwater Threshers. 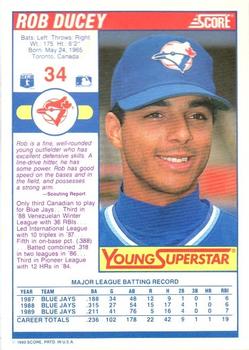 In 1986, he won the Tip O'Neill Award, given to a Canadian baseball player "judged to have excellent individual achievement and team contribution while adhering to the highest ideals of the game of baseball."

He is one of three Tip O'Neill Award winners to also be inducted into the Canadian Baseball Hall of Fame:

Larry Walker and Terry Puhl are the others.

I hope this wasn't too painful a walk to the past.. :)