Well, my birthday is this Sunday coming up.

I decided to buy myself a few small things since I had the extra money to do so..

The first one I want to show off is the 2011 In The Game Canadiana set.
I bought it from Dave And Adams. It was shipped quickly and received great. The only problem, and something I've been in contact with them about, is that there were two cards missing from the set. 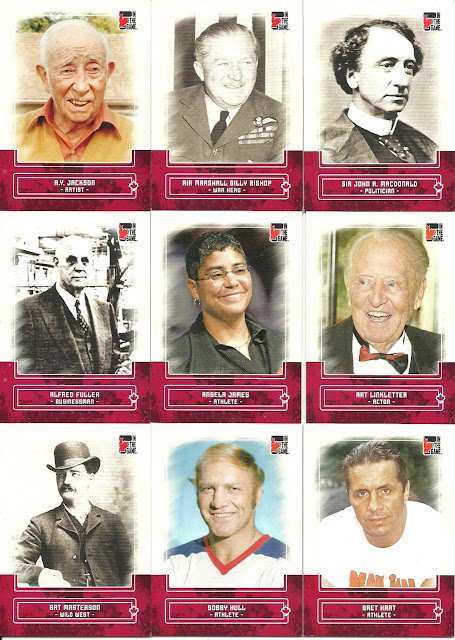 The set covers all aspects of Canadian history. Sports, entertainment, politics, and more.
Billy Bishop was a World War I flying ace, for example. He now has a couple airports in Canada named after him.
Bat Masterson is Canadian. 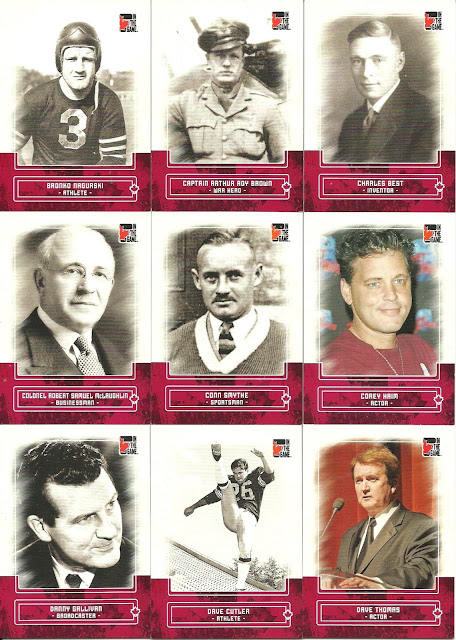 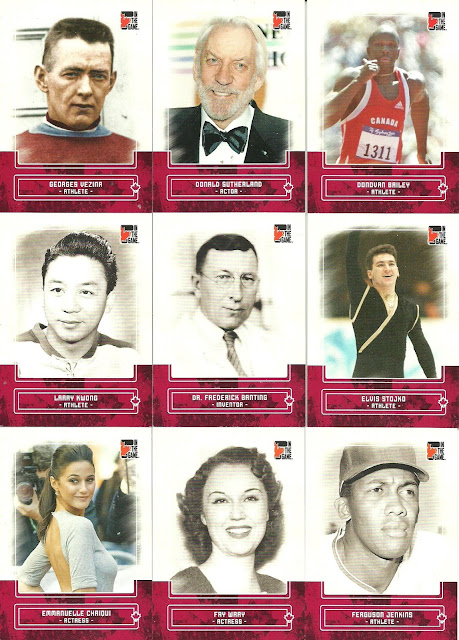 Fergie Jenkins has to be in this set.
Fay Wray was born in Canada. She was one of the first "Scream Queens"
Banting and Best discovered insulin. 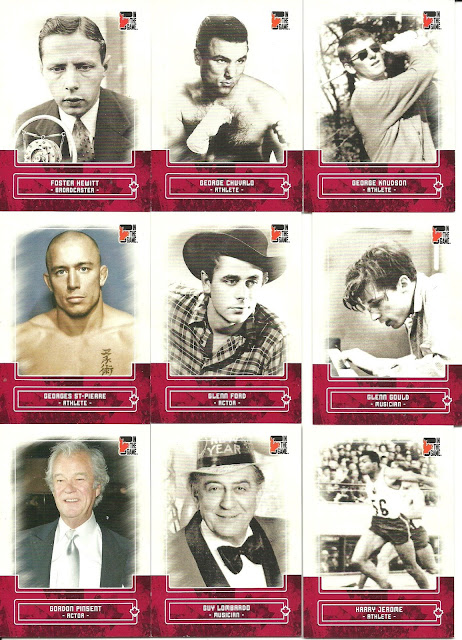 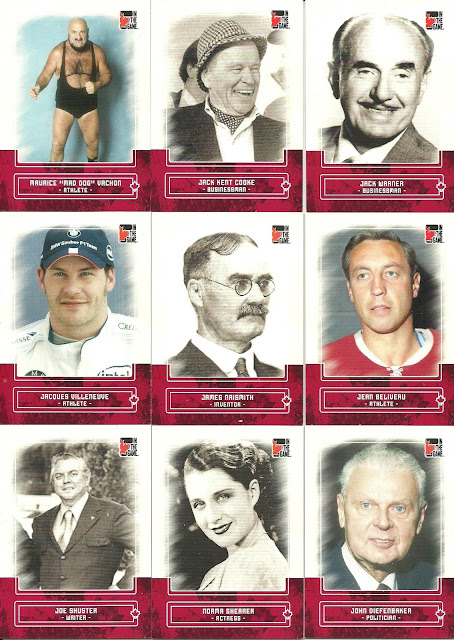 Mad Dog Vachon makes the set for being a rather famous pro wrestler.
Jean Belliveau played for the Canadiens.
James Naismith invented the game of basketball.
John Diefenbaker was the 13th Prime Minister of Canada. He created the Canadian Bill of Rights in 1960, which allowed First Nations peoples to vote. 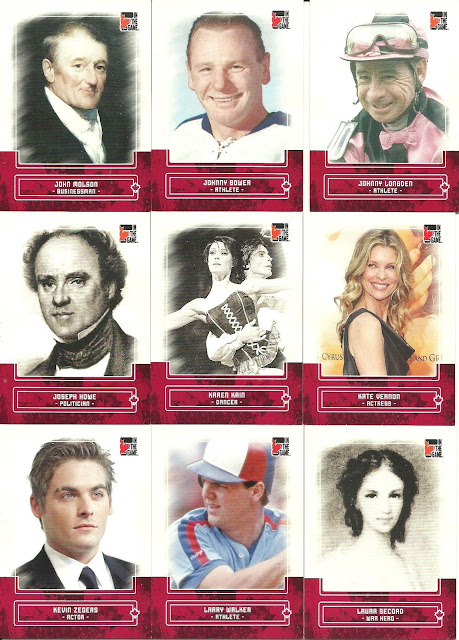 John Molson is the founder of the Molson Brewing Company.
Larry Walker shouldn't be a surprise.
Laura Secord is said to have walked 20 miles through the woods to let the British know about an American attack during the War of 1812. 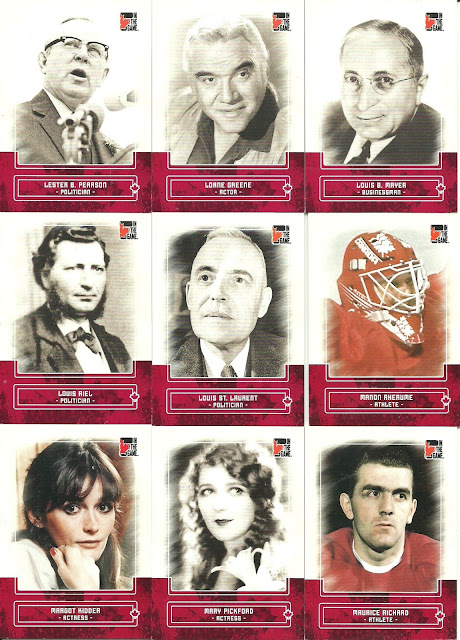 Louis Riel founded the Province of Manitoba and led two rebellions against the Canadian Government.
Manon Rheaume was the first female to play in NHL exhibition games.
Maurice Richard really needs no introduction to hockey fans/historians. 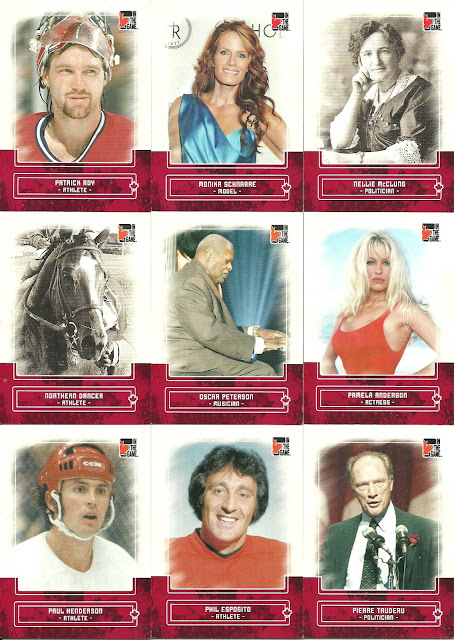 Pamela Anderson shows up in the set.
Patrick Roy was a Hall of Fame Goalie for the Canadiens and Avalanche.
Pierre Trudeau is the father of our current Prime Minister, Justin. He also introduced the Charter of Rights and Freedoms in 1982. 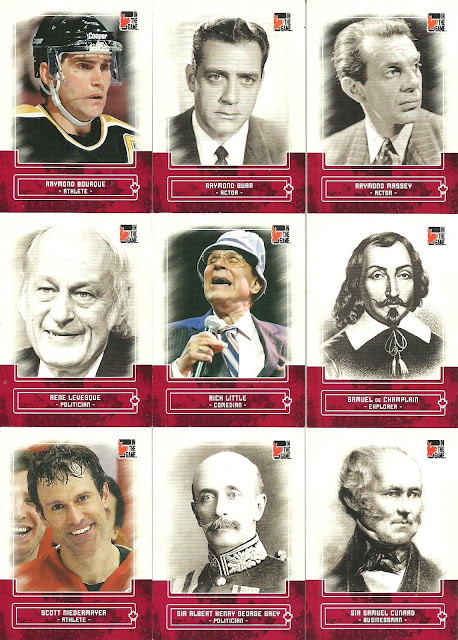 Rich Little is an impressionist who apparently annoyed Johnny Carson.
Rene Levesque was a politician who brought the Separatist movement to the fore in Quebec. 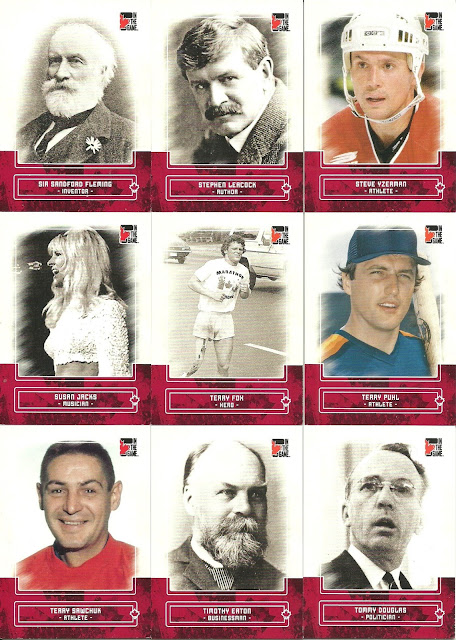 Sir Sandford Fleming. There is a College named after Fleming here in Peterborough. If I'm not mistaken, he spent some of his life here in town.
Fleming is known for suggesting and implementing Standard Time.
Terry Puhl is another baseball player that made the list.. I believe he's the third and final baseball player.
Timothy Eaton was the founder of Eaton's. It started as a department store with a mail order component. It became a nationwide chain that kept the mail order component until the company went under.
Terry Fox lost his leg to Cancer, so he decided he was going to run across Canada to bring awareness and try to raise money to find a cure.
The "Marathon of Hope" ended in Thunder Bay, when his cancer returned. There is now a statue and a tourist information centre outside Thunder Bay. 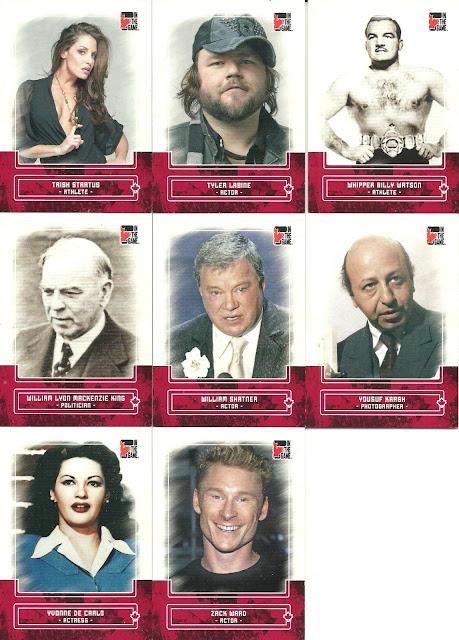 Another couple wrestlers here with Trish Stratus and Whipper Billy Watson.
William Shatner is fairly well known for a cult show. I believe it was called Star Trek..
Yvonne De Carlo ended up being on The Munsters.

So as I mentioned, there were two cards missing. Those were Jeff Healey and Stompin' Tom Connors.

Anyway, I hope you enjoy looking through these. I'll have my COMC order up next post.