We go from one of the uniforms I liked at the beginning of the decade to probably the worst uniform in Toronto sports history.. The Angry Birds Jay.. 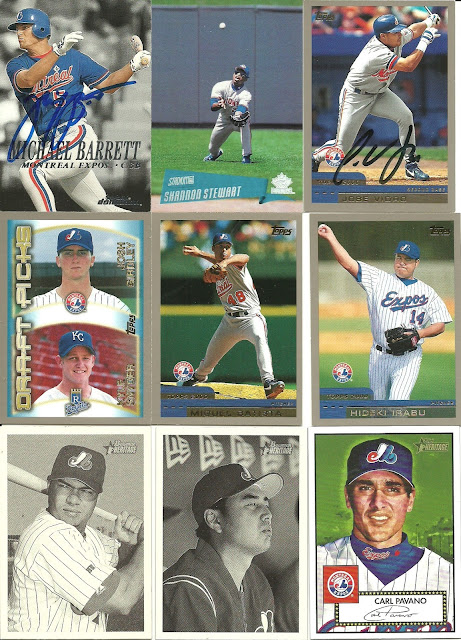 Ahh 2000.. The Expos have been wearing pinstripes for a few years now, Hideki Irabu went from being called a "Fat Toad" by George Steinbrenner, to throwing like a toad for Montreal, and the Jays are wearing some nice uniforms. Not quite the originals, but still nice...

Oh! And we have Michael Barrett and Jose Vidro with autographs on cards! 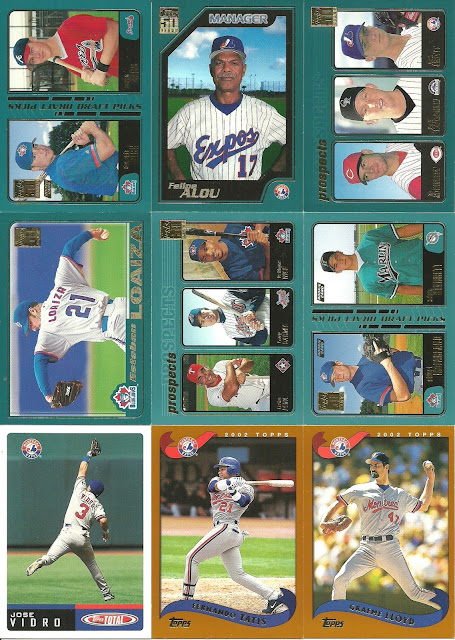 I miss the teal Marlins uniforms..
Felipe Alou manager card.. I miss those manager cards. Especially when they would also show the coaches. 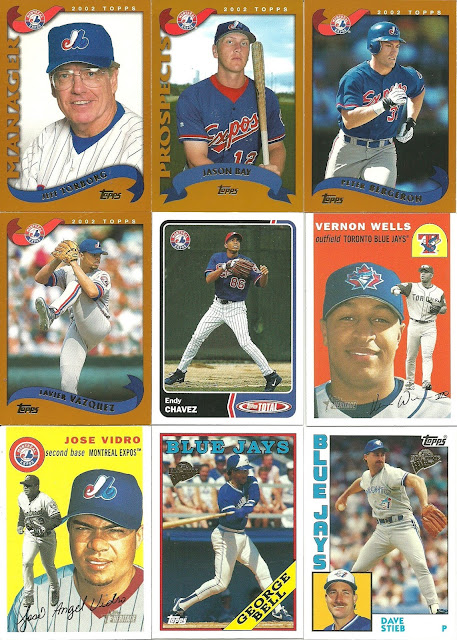 Jason Bay as an Expo?? Turns out, according to Baseball Reference, Bay was drafted by the 'Spos in 2000. Traded to the Mets in 2002 for Lou Collier. Well. I just know I need to get a second one now for the Canadians binder.
Topps Fan Favourites. Probably the only way Jays fans will get cards of George Bell and Dave Stieb nowadays. 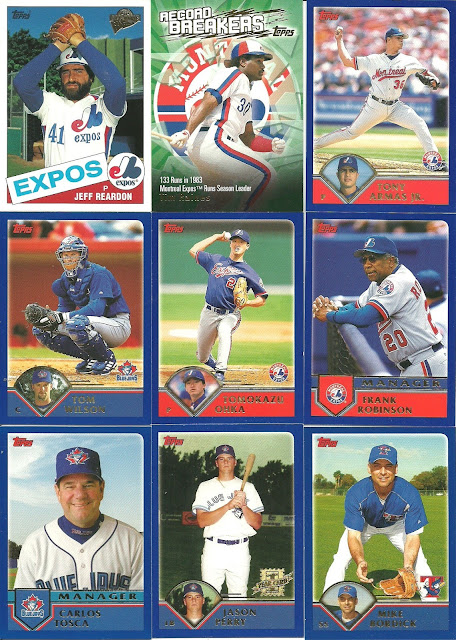 Jeff Reardon as an Expo. I still love those uniforms shown in the Reardon and Raines cards.
Carlos Tosca is one of those managers from the era of Jays history we try to gloss over.. Or just forget..
I've been thinking about this for a while.. Seeing Tom Wilson here reminds me of it.. The Jays have been horrible at drafting and developing impact catchers. I should add.. And keeping them...
Really, after Pat Borders and Greg Myers, who is there? 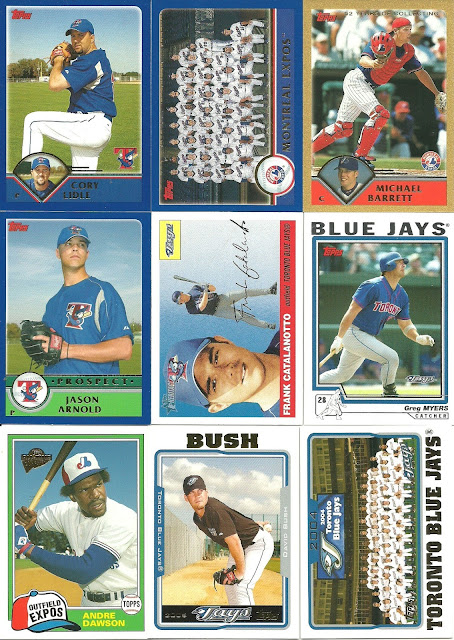 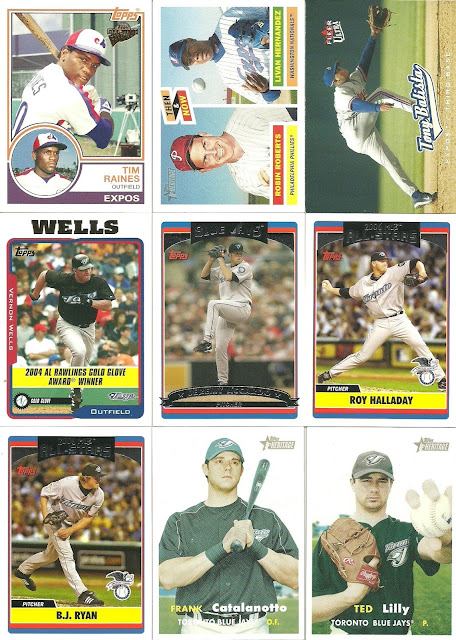 The Then and Now threw me off when I was entering it into my collection. I was wondering why I didn't have it marked as a want.. Then I saw it.. While Hernandez is wearing the Expos uni, it's listed as a Washington Nationals card.
Here we are into the Angry Birds Jays era uniforms. 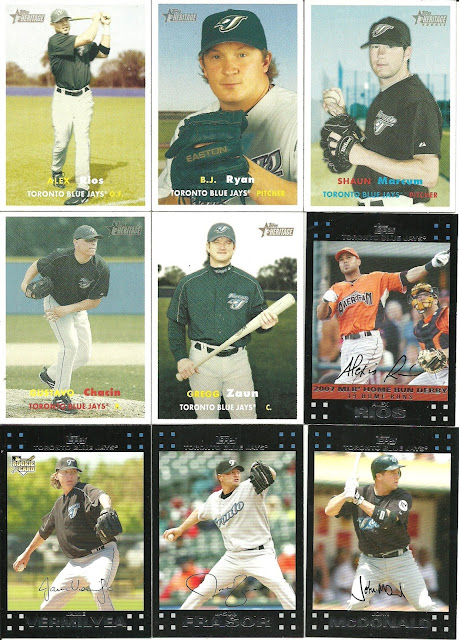 It's odd.. On the TCDB for the Heritage listing for these, that BJ Ryan is listed as an Orioles card.
Jamie Vermilyea went on to become pitching coach for the Winnipeg Goldeyes years later.. 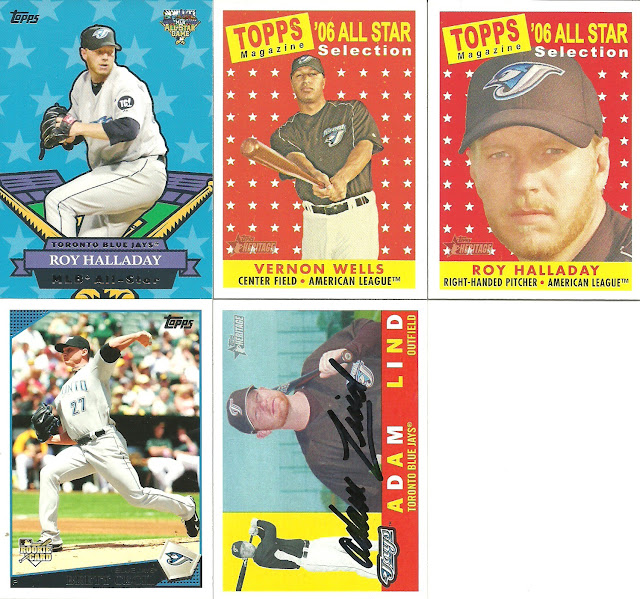 Finally some cards from 2009.
I don't mind the design for the 2009 flagship set.. They're interesting.

And what's this? A second Adam Lind autograph to add to my collection. Very nice!

My next post will be the final one in the series, with 2010-current.
Posted by Mike Matson at 5:32 PM