Well, as we hit that spot that the scientists like Neil DeGrasse-Tyson like to remind us is arbitrary..

I'm not one to celebrate too much about the Christmas or New Years holidays now. Never was one for New Years. It always depressed me. The passage of time coupled with the year end retrospectives always made it a time where I would feel.. Incomplete? I've never been one to go out and get drunk, so that aspect is lost on me as well.

But I know you're here for the card aspects here.. So while I don't like setting goals or resolutions..
I do have a couple goals for 2020..

1. 1978 Topps  I'm currently 29% into collecting it. It's my birth year set and I'd like to finish collecting it. I realize there are some expensive cards in it, so while completion may not be in the cards this year. even getting to 75% would be a win for me this year. That said. Anyone who has 78s let me know!!

2. Jays and Expos Collections  I'm continuing with them obviously, but I think this year I want to concentrate on the Topps Flagships for both teams. Go back to the start year for both teams and make sure I have the team sets from there. If I can complete this over the year, great!

3. Canadians Collection  Obviously keeping this one going as well. I'm also thinking about revisiting my Canadians in the Big Leagues thing I was doing for a while when I first started.

It's one of those sets I've been collecting on and off since 1992.. I don't know what it is.. I just can't really become too big of a fan of it.. I mean visually it's a nice card 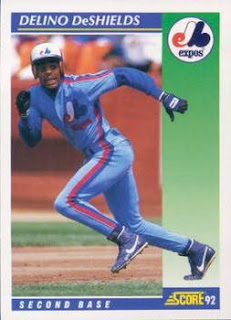 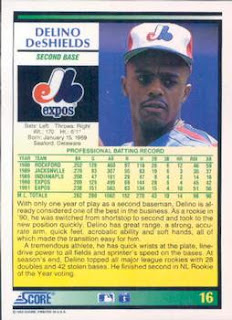 But there's something about it that... Meh?? Realistically the only Flagship set I collected in 1992 was Donruss.. Topps' design bored me, but I ended up getting an OPC factory set. I like Pinnacle. Leaf is nice, though I like the Black Gold ones better than the Base.. Fleer was bland. Upper Deck was interesting, but it was also the same design basically three years in a row..

Then there's Score. The photos used are decent. Very Focused on the player involved. I don't think I'm a fan of the "Void Border" though. That band of.. Nothing... that the pictures invariably bleed into.
The backs of the cards, I like. I like the information on the back, the stat lines giving minor league teams as well. The one thing I've always liked about Score sets are the bios.

Sadly, this one will be one I'm going to get rid of aside from the cards I need to fill my collections. I do like one of the inserts though and will continue to collect it.. The Impact Players insert I really liked..