This is the fourth part in the wonderful pile of cards I was sent. 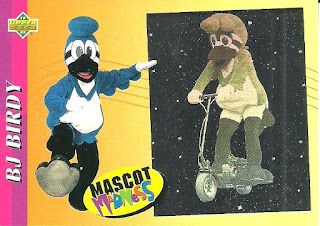 I saw this card on another blog and immediately said "I want this!" And lo and behold, I was sent one.
I miss this guy. I prefer him over Ace, but that won't stop me from trying to get the mascot card of Ace either.

So Jose Pett.. I hadn't heard much of him, other than he was supposed to be a really good player. Just reading the writeup on Baseball-reference.com on him, many scouts thought he would be a great one as well.. Pett was included in the trade that brought Orlando Merced and Carlos Garcia to the Jays.
Ed Sprague had a decent career, though he did get the nickname E5.
Aaron Small was about as typical and unremarkable as you can find as a middle reliever. Bounced around for his career. Had a couple years he didn't make the majors. 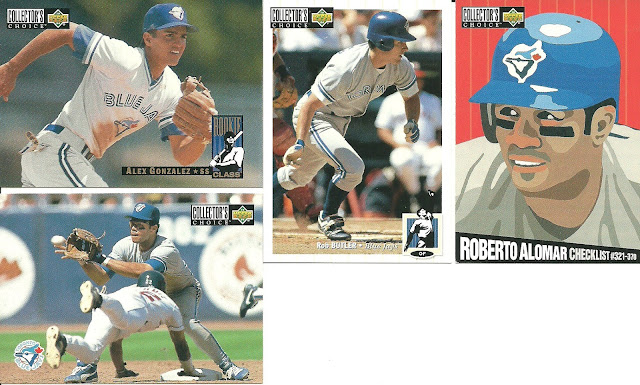 Alex Gonzalez! One of two that played in the majors. Both had overlapping years and both played in Toronto for part of their career.
Rob Butler was a Triple A player that ended up getting some time as a 5th outfielder for Toronto and Philadelphia. He even got a ring, in 1993. Of course, he's Canadian, so...
The other two cards are checklists. Both feature Roberto Alomar. The drawing is the set checklist while the picture of Alomar fielding is the Team Checklist. 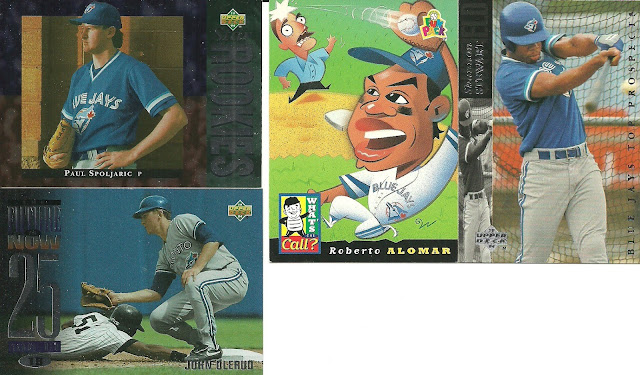 Paul Spoljaric was a pitcher for the Jays, Mariners, Phillies, and Royals before going to the Semi-Pro Intercounty Baseball League. He also was part of the 2004 Canadian Olympic Baseball Team.
The card beside the Spoljaric is... Unique.. Part of the Kids set by Upper Deck, it shows Umpy getting drilled in the head by a liner and Alomar catching the ball, then asking what the ruling on the field would be.
The Shannon Stewart card shown here is the Upper Deck Minor League set. There are some interesting cards in it.. I'd like to get more.
The last in this grouping is of John Olerud. The Future is Now. 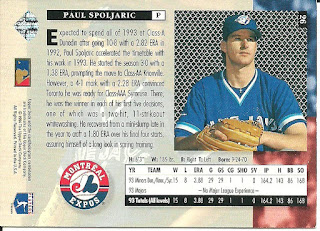 One quick note on the Spoljaric card from above. Listed on the Trading Card Database as an Uncorrected Error. I was trying to figure out why until I saw the explanation. Jays Uniform...Expos Logo... Oops.. Then again, it didn't register in my brain either..

These three are rather forgettable. Craig Wilson was part of the trade that brought Merced to the Jays. Crabtree pitched for the Rangers as well. Martinez bounced around.

Two cards showing my second favourite Jays uniform. (I consider the current and the original two as pretty well one.) Here we have two of Shawn Green and one of Chris Carpenter. 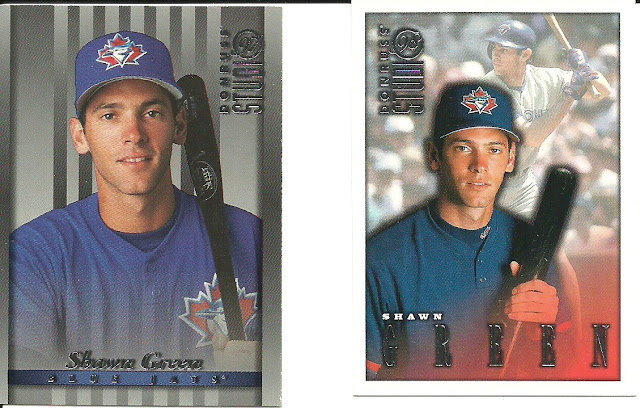 Yes, I'm showing the same Green card twice.. There is a reason.. Studio tended to be one of my favourite sets. Generally small, tended to give a little more information beyond the Stats.
Here we have the 1997 and 1998 Shawn Green. So far so good.. Let's take a look at the back.. 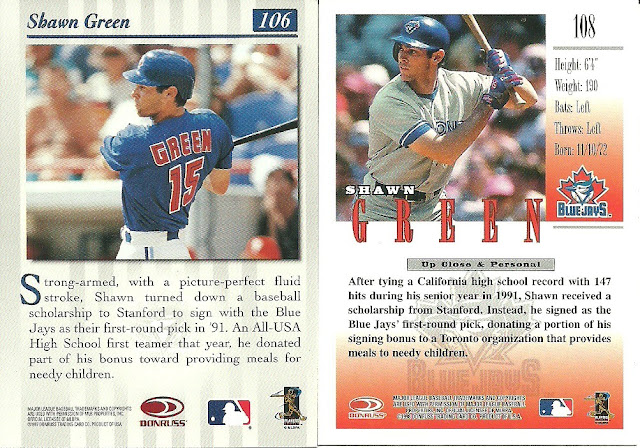 So based on the back, I have to go with the 1998. I do at least like to know the height/weight/birth information. But two years in a row they mention how he used part of his bonus to help provide meals to needy children. They couldn't have found something else to write??