I'm probably going to be able to stretch the cards I got from Richard to a few posts. This one will likely be 1986-1991

1986 Topps had a very.... Mid 80s design. We have some good players though. Dave Stieb, Doyle Alexander, Al Oliver, and Jesse Barfield.

It looks like the photographer for Topps was hanging around the batting cages for most of the images.

I almost would have preferred the set to look more like the team leaders cards.

And we come across one player who I collect simply because he's a Jay..
I speak of Rance Mulliniks..

I think it's just because of listening to him on commentary on Jays broadcasts that make me dislike him as much as I do. 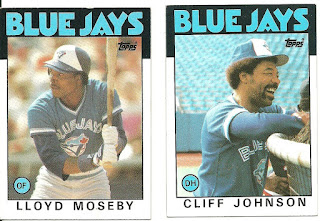 So two young players and one veteran shown here.
Sil Campusano was supposed to be the next big thing. He wasn't. He didn't hit and then went to the Phillies. After that he went to Mexico.
Geronimo Berroa was better known as an Athletic. He didn't play for the Jays in 1989. In fact he was a Brave, selected in the Rule 5 draft. He didn't play in Jays colours until 1999.
Mookie Wilson finished his career in Toronto. He's better known as a member of the New York Mets.

Glenallen Hill was part of the trade that brought Tom Candiotti to the Jays. He had a decent career.
Willie Blair played briefly for the Jays before being traded to Cleveland.
Eddie Zosky.. He was supposed to be the Great Hope at Short.. Instead, he showed he couldn't hit at the Major League Level and spent most of his career in the minors.

So in this group we have Mauro Gozzo and Alex Sanchez. They became part of the bait that was sent to Cleveland to get Bud Black.
Mike Flanagan spent a little over three years as a Blue Bird before going back to the Orioles.
Lee Mazzilli ended his major league career in Toronto after his second go with the Mets.
Frank Wills played his final four years in Toronto.

Kevin Batiste played 6 games in the majors in 1989. That was all.
Xavier Hernandez was drafted by the Jays, but was drafted by the Astros in the Rule 5 draft.
William Suero was signed as an amateur free agent, but never played for them. He was traded to Milwaukee for Candy Maldonado.
Rene Gonzales spent one season in Toronto. He was a typical backup middle infielder. 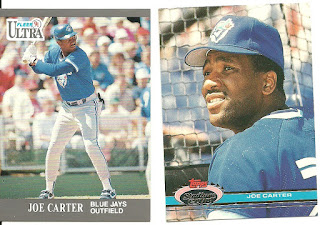 Steve Karsay was part of the package that brought the Jays Rickey Henderson for the 1993 stretch drive.
This is the only card of Denis Boucher I have in a Jays uniform. He started 7 games for Toronto in 1991 before being sent to Cleveland in the Tom Candiotti trade.

Next post will be more oddball players and odd cards