I was looking through my magazine bin not too long ago and I came across some Blue Jays programs from different times I went to games (and one from my former boss) and I wanted to take a look at some of the old advertisements in them..


First is actually a schedule for the 1985 season. My former boss at Mac's had this laying around and I was able to get it from him because it would have otherwise gone to the recycling depot.

In something that wouldn't happen anymore in this day and age: Sponsored by Player's tobacco. The page after (which I didn't scan) was a full page Player's ad.

A Penmans ad.. Penmans is a Canadian clothing company from Paris, Ontario. It was started in 1868.

Penmans made cotton and woollen clothing. It is still around, selling through Walmart online.

Here in the ad we have Former Expos player Gary Carter and his daughter.

There are sponsorships everywhere. Here we have the Official Airline of the Blue Jays.

In 1987 it was sold to Pacific Western Airlines and renamed Canadian Airlines International. In 2000, it merged into Air Canada.

In this ad we have Bobby Cox and Jesse Barfield.

Panasonic had an ad in the program about the new thing in cooking: Microwaves.

30 years ago, they weren't as prevalent as they are now.

I rather enjoy the ad because it shows how theirs is the best option..

(yeah, I know it has nothing to do with baseball :P)

It's always important to get people interested in different areas. You have to be able to show what your area offers that people may like.

Back in 1985 they had travel hotlines that you could call to find out what's going on in an area.

Of course, the big thing here is the rotary phone. Thought that might be a kick for some of the youngsters out there.


Want a laptop from 1992?
Texas Instruments had them.

I just had to throw this out there to show how much things have changed.. We carry around more computing power in smaller cases now, with smartphones and even smart watches. 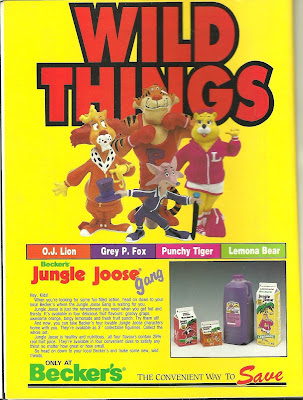 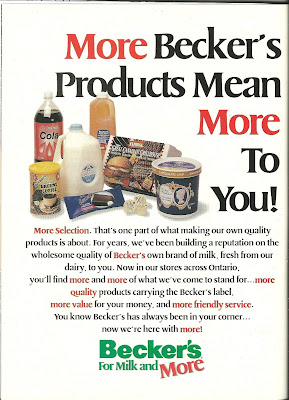 Here are two different Becker's ads. Becker's was a convenience store company that ran in Ontario until it was purchased by the Quebec company Alimentation Couche-Tard. That became Mac's. Now, they're going to be going into another rebrand, this time as Circle K.

Both ads here show product that have long been discontinued, aside from the milk. Mac's has since revived the pop line but it is interesting to see what the store used to carry as exclusives. 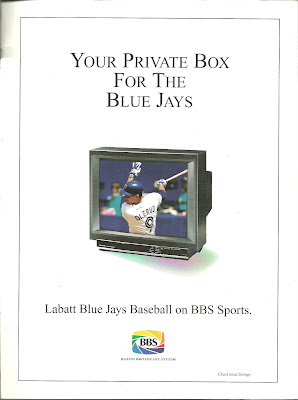 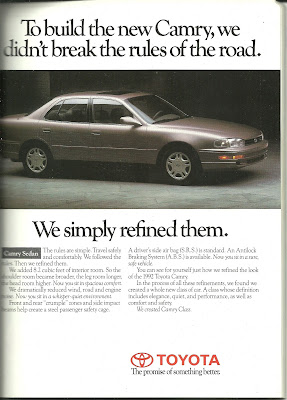 I like the one on the left because it's rather simple. It's just an ad for Baton Broadcasting System who was a broadcast partner for the Blue Jays until the 1990s. When I first took interest in baseball, I could watch a Jays game on TSN (The Sports Network), CTV (carried BBS broadcasts), or CBC (Canadian Broadcasting Corporation). Now, it's Sportsnet or nothing.

A nice ad for the Toyota Camry, a model that is still around today. 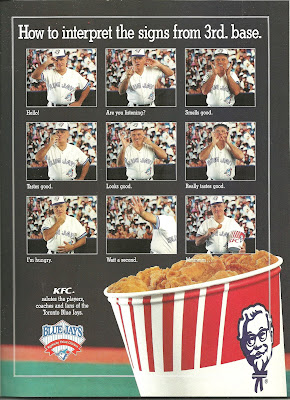 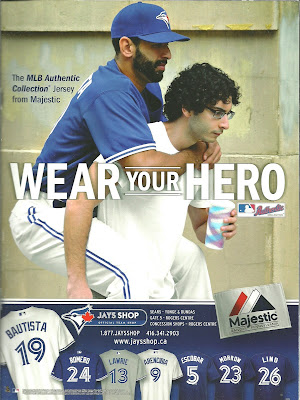 A couple of the offbeat ads. The left is KFC. This one was around in 1992. I always liked this ad. I just don't know why..

The right one is a more recent one from a couple years ago. I thought the idea of Jose Bautista piggybacking on someone is funny, but gets the point across. 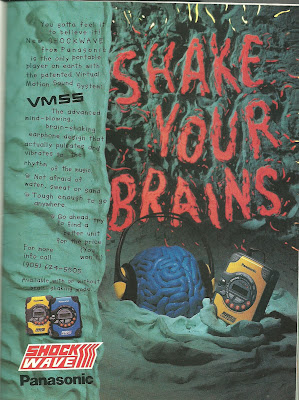 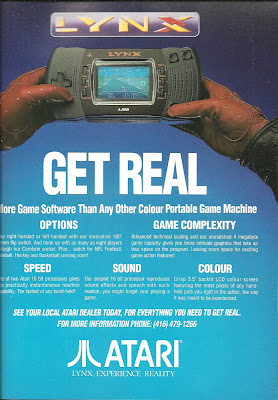 The left is for the Panasonic Shockwave portable cassette player. I had one of the cassette and one of the CD players when I was younger. I thought they were interesting but again, these have been replaced first by MP3 players then phones that double as a mini computer.

The Atari Lynx. Nintendo may have the monopoly on dedicated portable gaming systems now but it wasn't always the case. Atari and Sega both had out systems in the 1990s that had colour screens compared to the Green screen of the GameBoy. Of course, both the Lynx and the Game Gear crashed and burned. 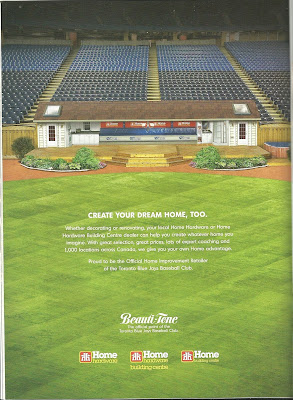 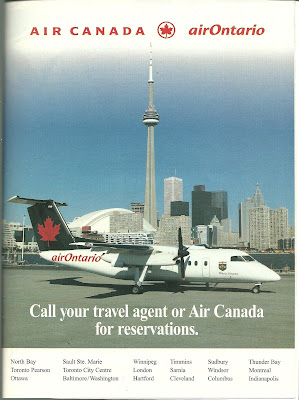 Home Hardware has been a sponsor of the Jays for a while now. They even sponsor the 5th inning cleanup crew. Again, just a little bit of an odd ad with turning the dugout to a mini house but it gets the point across.

Air Ontario started out as Great Lakes Airlines but was purchased by Air Canada in 1987. They ran Air Ontario as a regional airline, flying to smaller centres in Ontario. In 1990, they started straying from that model, and eventually merging their regional carriers to the new company Air Canada Jazz. 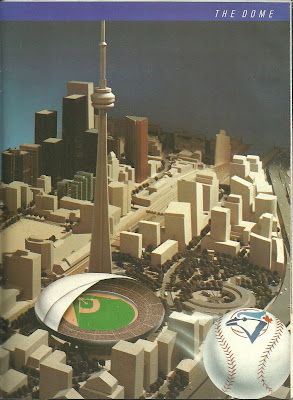 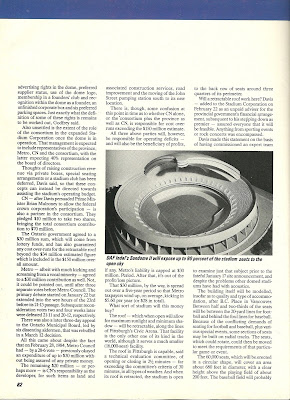 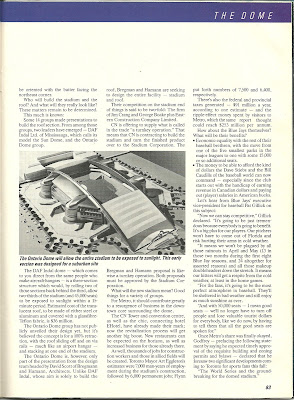 Not really ads, but in the 1985 magazine they mention the designs brought forth for the new domed stadium that was being planned.

Here are three designs that were put forth for what would become the SkyDome (now Rogers Centre).

Really, the one above is the closest to the design that ended up being built. The one on the left in a way reminds me of the Marlins stadium. 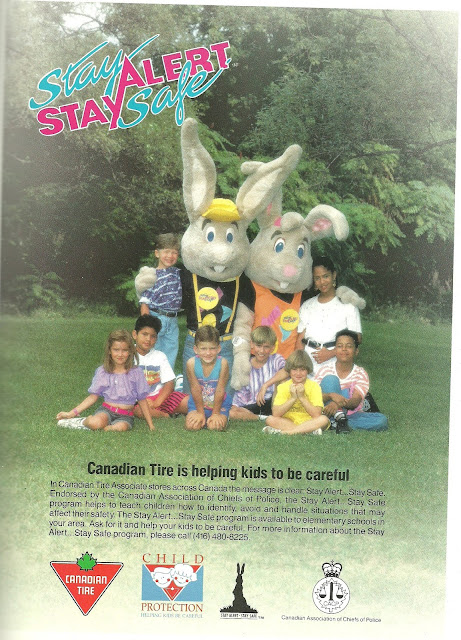 The final ad I'm going to showcase is one that's rather tame, but at the same time, creepy as hell as most PSA from that era were.

This one was part of the Stay Alert, Stay Safe program. Not only did they do print ads like this, but they also did TV ads.


Here was an introduction to them..


And here's another one.

I thought this might be an interesting change of pace from the normal. I hope you enjoyed the journey into the past with the Blue Jays Program Ads.