In the 1980s there were not as many sets as there are now. There were more manufacturers, yes, but not nearly the same number of sets.

Topps started doing Traded and Update sets to cover player movement. Fleer and Donruss followed suit. One company however, just threw a line of text on the card and called it a day.

O-Pee-Chee, a Canadian company that had an agreement with Topps to print using the same design, but catered more to the Canadian market. This means more Expos and Jays and adding French to the cards as well.

In the early to mid 80s, the O-Pee-Chee sets tended to be smaller than the Topps sets. They also were not as well-produced, with lower quality card stock and cutting techniques.

Another thing O-Pee-Chee did was, rather than airbrushing the photo or releasing an updated set later in the season, they slapped the text "Now on 'Team X'" on the Topps card and called it a day.

It might be easier to show, rather than explain.. 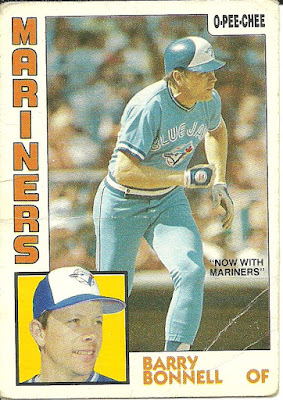 So here we have a 1984 Barry Bonnell card. This is his OPC card on the left. On the right is the Topps card.

Now, Bonnell was traded by the Blue Jays on December 8, 1983 to the Seattle Mariners for Bryan Clark.

Topps didn't change his card until the Traded set later in the season. O Pee Chee added in "Now With Mariners" on the front of the card by Bonnell's knee.

And here's the Topps Traded card for reference.

Bonnell is not an isolated case. I have a few of these from 1983 and 1984 that I'm going to highlight today. 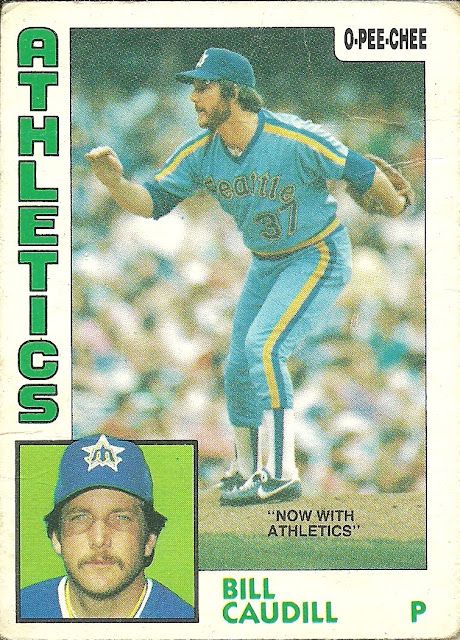 1984 OPC Bill Caudill.
Caudill was traded by the Mariners on November 23, 1983 to the Athletics with Darrel Akerfelds for Dave Beard and Bob Kearney

Bill Caudill is also featured in the Traded set as card 23T . (All Links open in a new window) 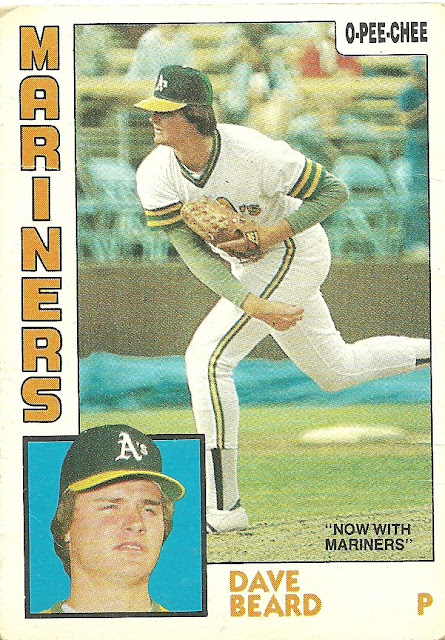 Dave Beard was part of the Bill Caudill trade I mentioned above.

And of course, Dave Beard in the Traded Set. 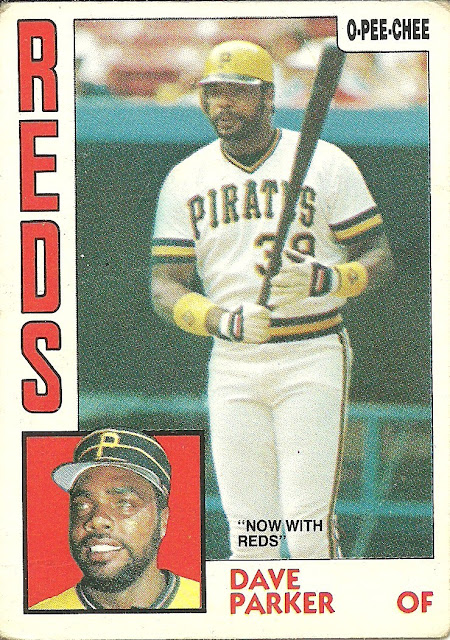 Dave Parker signed as a Free Agent with the Cincinnati Reds on December 7, 1983.

And the Traded Card 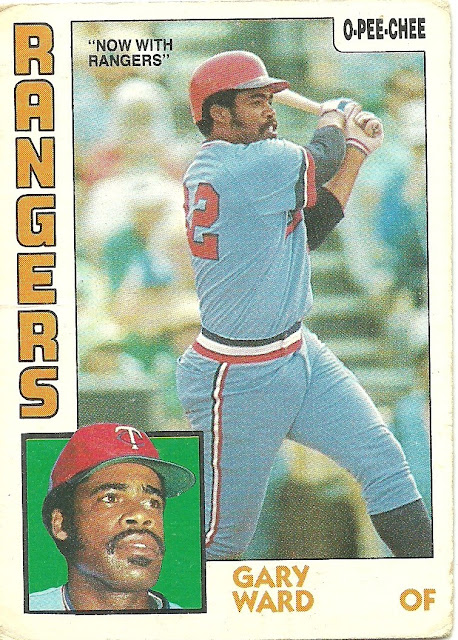 Gary Ward was traded December 7, 1983 to the Rangers for Sam Source, John Butcher, and Mike Smithson.

As usual, the Traded Card 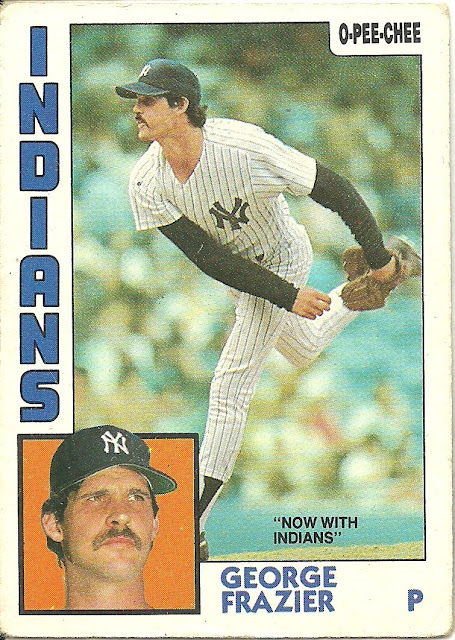 Now, the interesting thing is for his Traded card, he's not shown as a memeber of the Indians.. In fact, he's a Cub. The reason?

On June 13, 1984, he was traded with Ron Hassey and Rick Sutcliffe for Darryl Banks, Joe Carter, Mel Hall, and Don Schulze. 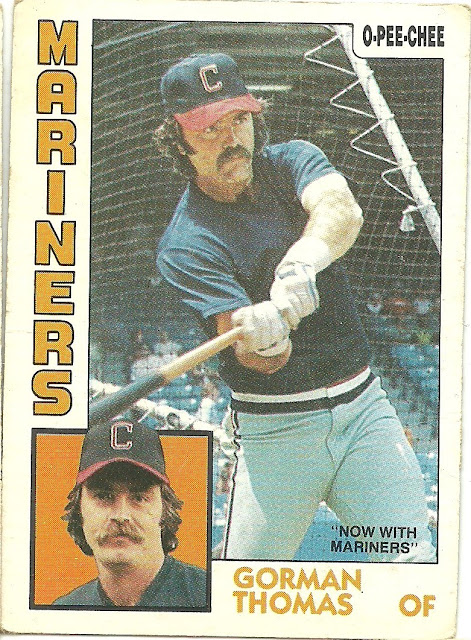 On December 7, 1983, Thomas was traded with Jack Perconte to the Mariners for Tony Bernazard.

Here is the Traded Card as well. (He just looks odd as anything but a Brewer) 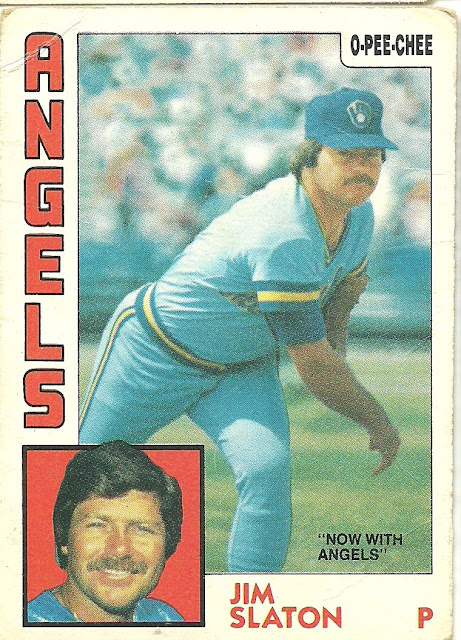 December 20, 1983 Jim Slaton was traded to the Angels for Bobby Clark 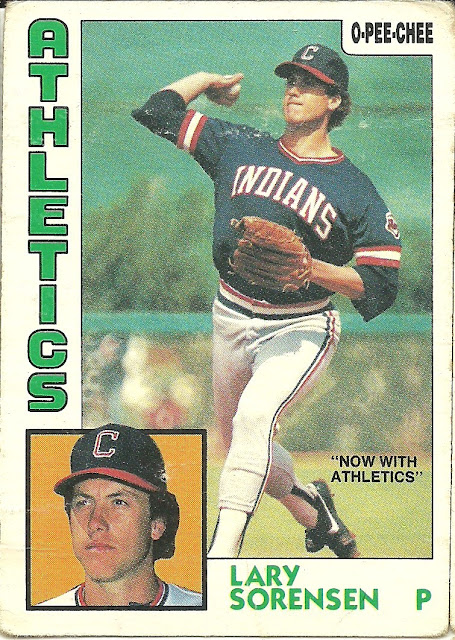 January 23, 1984 he signed as a Free Agent with the Oakland Athletics. 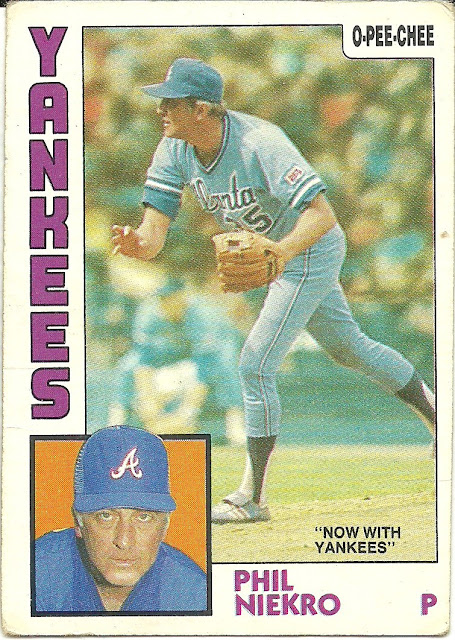 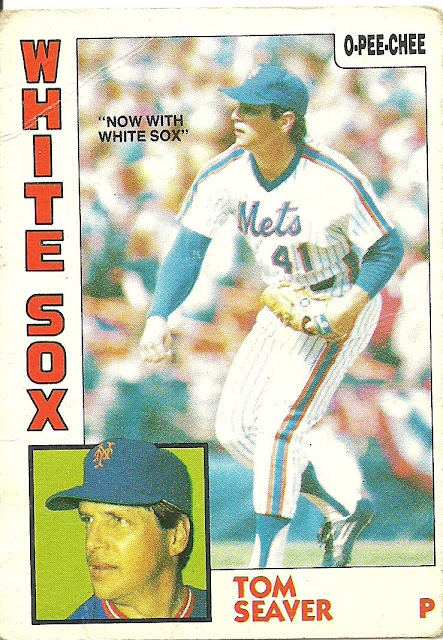 January 20, 1984 Seaver was chosen by the White Sox as a Free Agent compensation pick
Under the rules of the day, teams losing a free agent could draft a compensation player from the team that signed the Free Agent. The Mets, thinking nobody would want to take a 39 year old pitcher with a high salary, left Seaver unprotected.. Oops..
(I remember reading that this transaction was the kick needed to revamp the compensation system)

And Tom Terrific as a White Sox 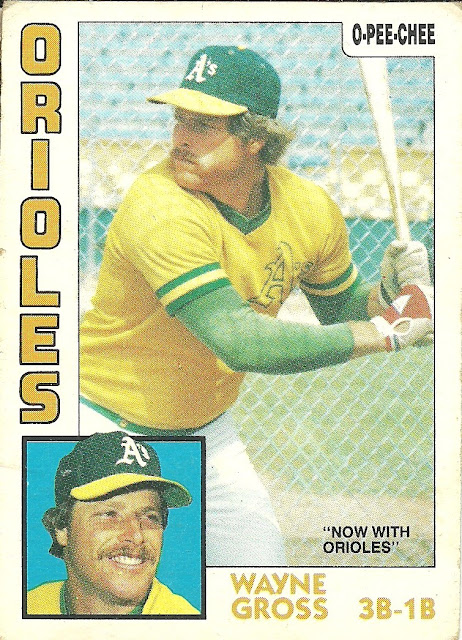 On December 8, 1983 he was traded to the Orioles for Tim Stoddard. 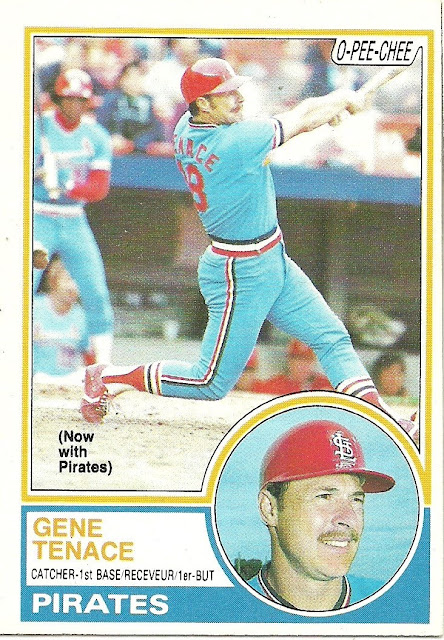 On December 1, 1982 he signed as a Free Agent with the Pittsburgh Pirates 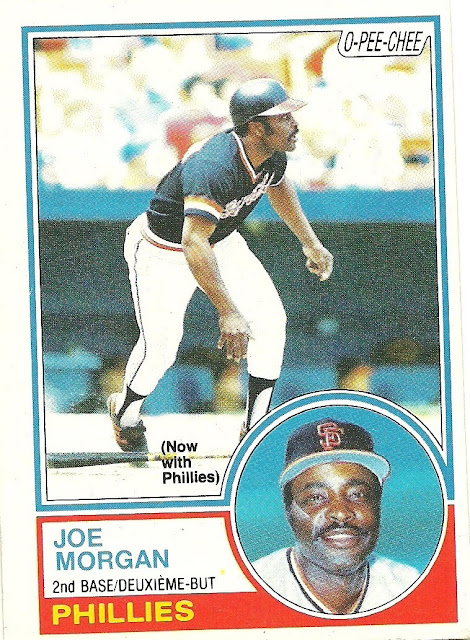 On December 14, 1982, he was traded with Al Holland to the Phillies for CL Penigar, Mark Davis, and Mike Krukow.

Now, Morgan has an extra interesting part. In the 1983 set, there were Super Vet cards. Morgan is one of those who received such a card. The note of his change is reflected both on this card above and on the Super Vet. 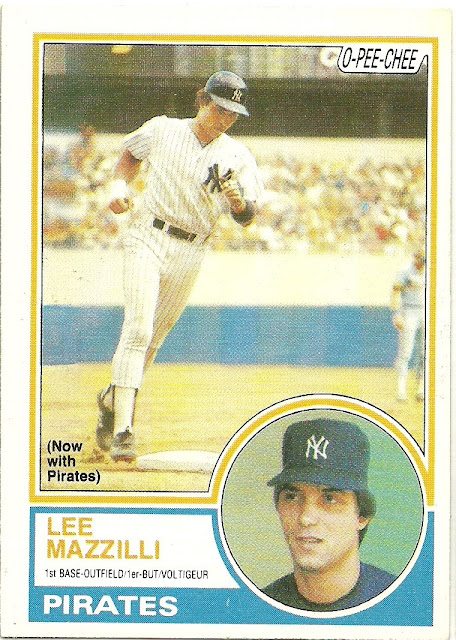 On December 22, 1982, Mazzilli was traded to the Pirates for Jerry Aubin, Bubba Holland, Jose Rivera, and Tim Burke.

Mazzilli as a Pirate 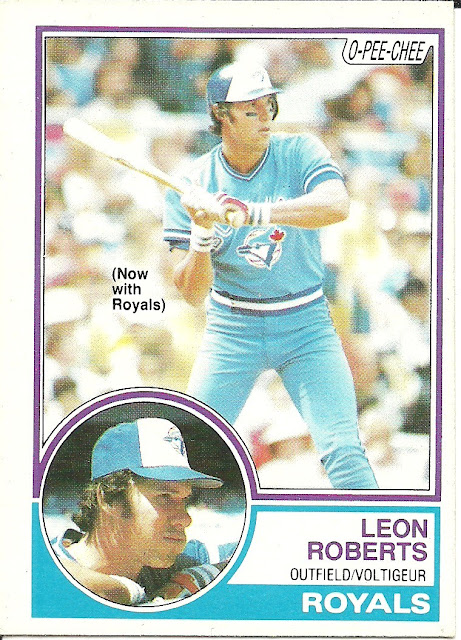 On February 5, 1983, Leon Roberts was traded to the Royals for Cecil Fielder 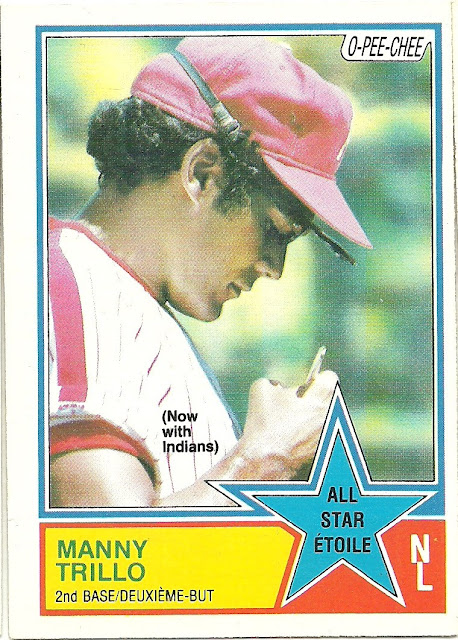 On December 9, 1982, he was traded with Jay Baller, Julio Franco, George Vuckovich, and Jerry Willard to the Indians for Von Hayes 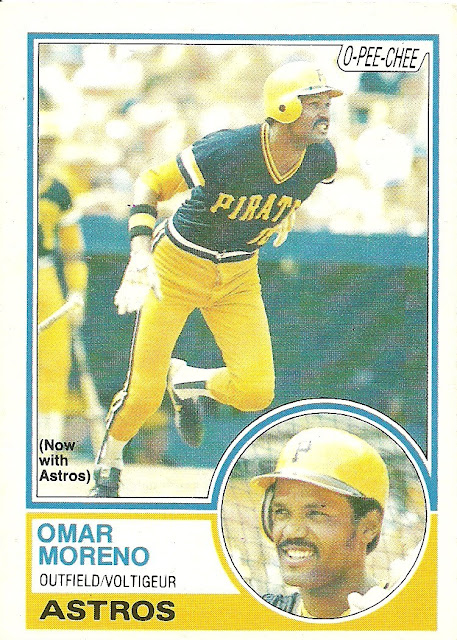 On December 10, 1982 Omar Moreno signed with the Astros as a free agent 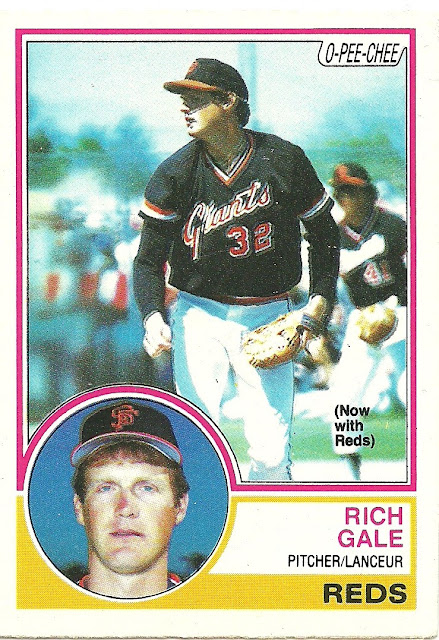 On January 5, 1983 Rich Gale was traded to the Reds for Mike Vail 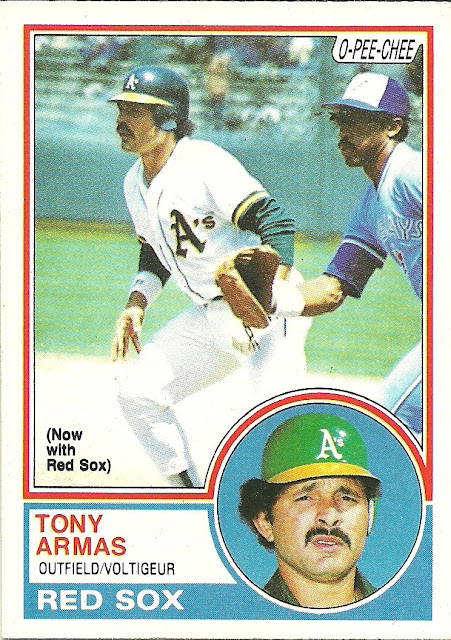 On December 6, 1982, Armas and Jeff Newman were traded to the Red Sox for Jerry King, Garry Hancock, and Carney Lansford.

So here are the cards I have. I guess without the ability/need/demand for the traded sets this was the best OPC could do.