More Jays and Expos for the Pile.

Well, not really the pile.. They're in binders now.. :P

So I recently made a purchase of some Jays and Expos from Bob (BOBSCARDZ) on the Trading Card Database. Some old, some older, all cool.. :) 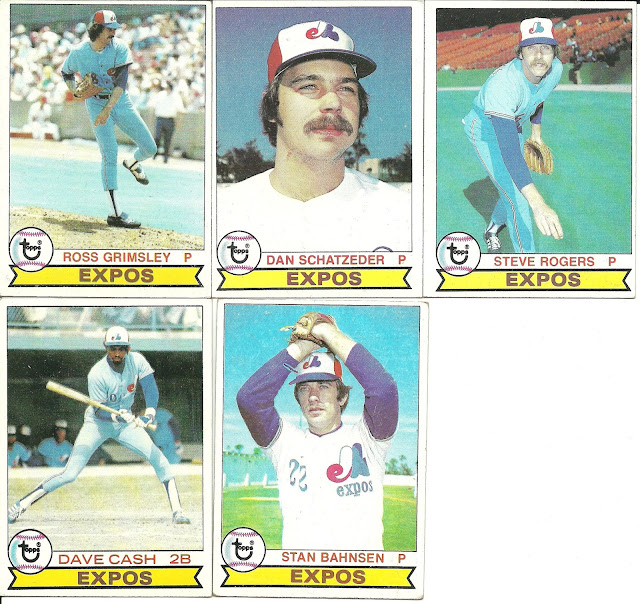 First we have a group of 1979 Topps Expos cards. Steve Rogers is probably the best known as an Expo out of these ones. Grimsley had a 20 win season for the Expos in 1978. Dan Schatzeder had two stints with the Expos. He was in the first one when this card was printed. Bahnsen was near the end of his career. Cash spent three seasons in Montreal before finishing his MLB career with San Diego. 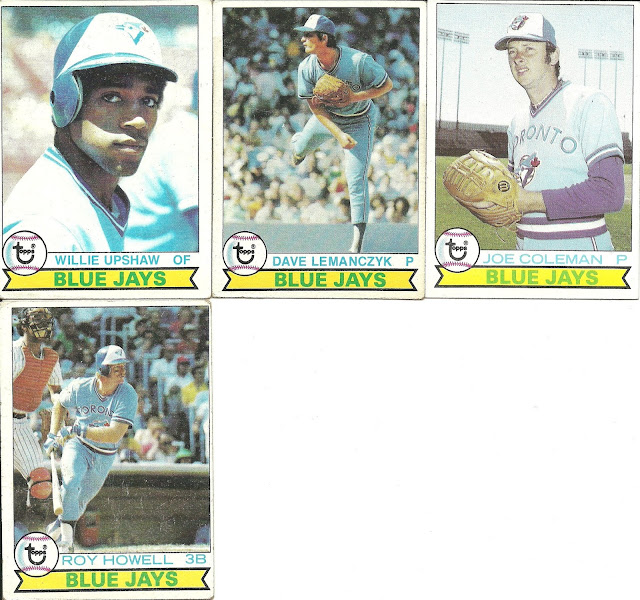 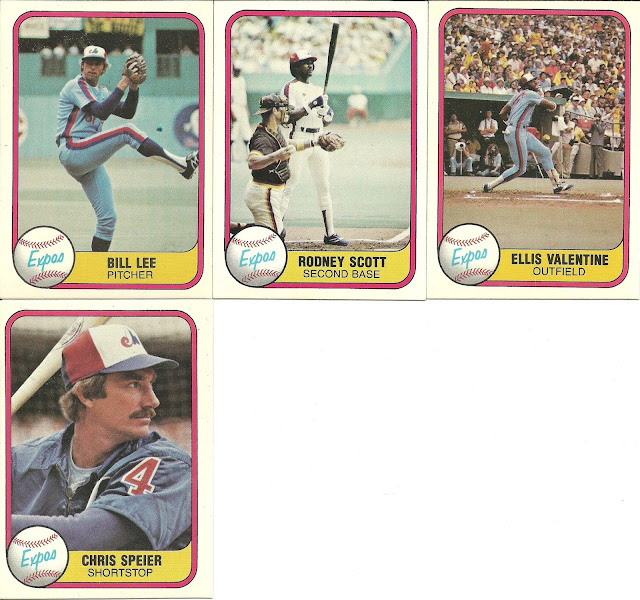 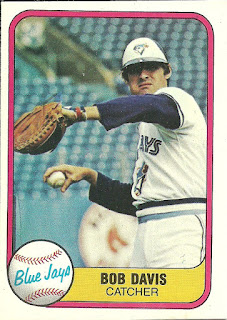 Bob Davis spent 1979 and 1980 with Toronto. He finished his career the next year with one game for California at the MLB level.

Another Bill Lee and Steve Rogers.. Fred Norman ended his career in 1980 with the Expos. 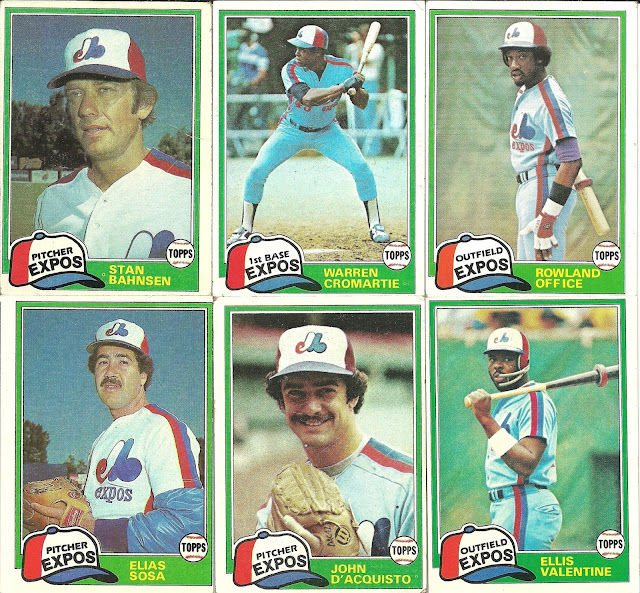 Stan Bahnsen and Ellis Valentine make appearances again here.
Cromartie spent 1974-1983 with the Expos before going to Japan, finishing his career with Kansas City in 1991. He's currently leading a group trying to get Major League Baseball back to Montreal.
Rowland Office spent 1980-1982 with the Expos. He was released in May of 1982 and spent the rest of the season in the minors. He finished his career with the Yankees in 1983.
Elias Sosa spent 1979-1981 with the Expos before going to Detroit and San Diego.
John D'Acquisto pitched 11 games for Montreal in 1980. He went to California and Oakland to finish his career. 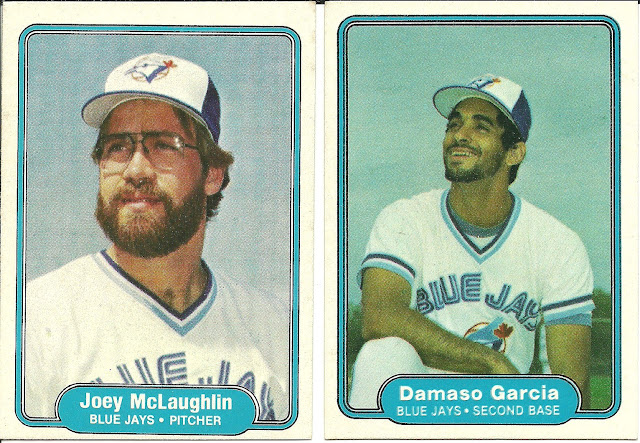 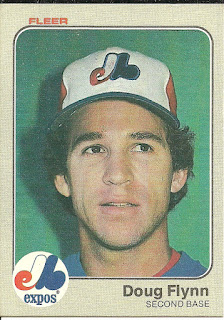 Doug Flynn played for Montreal between 1982-1985 before going to Detroit to finish off the 1985 season and his career. 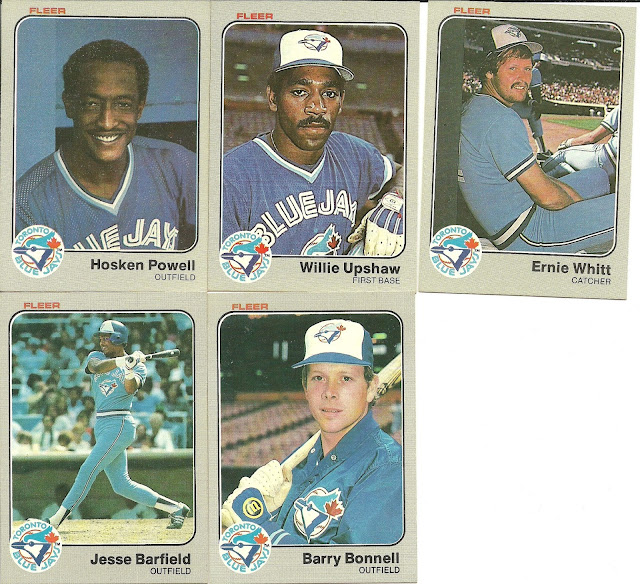 Another Upshaw.
Hosken Powell played 1982 and 1983 with the Jays.
Ernie Whitt played for the Jays from 1977-1989. He went to Atlanta in 1990 and Baltimore in 1991
Jesse Barfield played from 1981-1989 with the Jays before moving onto the Yankees in a trade. He spent 1993 in Japan to finish his career.
Barry Bonnell spent 1980-1983 with Toronto before going to their expansion cousins, the Seattle Mariners. Bonnell's post baseball life may be more interesting.. He's worked as a pilot, in the Home Medical Equipment field, and as a writer. 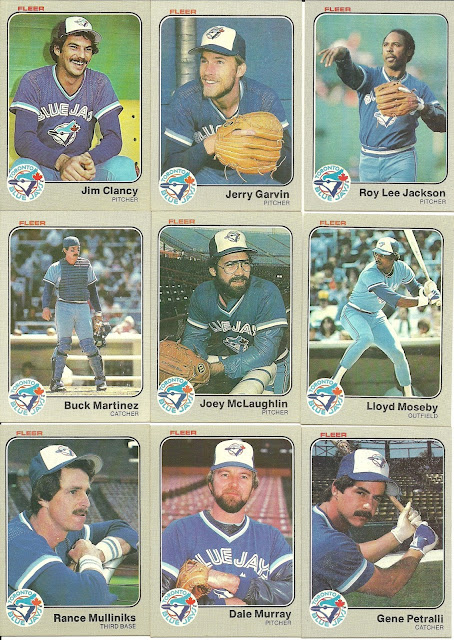 Another Joey McLaughlin.
Jim Clancy pitched for the Jays from 1977-1988. He went to Houston and Atlanta to finish.
Jerry Garvin played from 1977-1982 with the Jays. He's now in real estate.
Roy Lee Jackson played from 1981-1984 with the Jays before going to San Diego and Minnesota.
Buck Martinez played for the Jays from 1981-1986 before retiring. He now does commentary on the Jays TV broadcasts along with another former Jay, Pat Tabler and occasionally, Dan Shulman.
Lloyd Moseby played from 1980-1989 with Toronto before going to Detroit for two seasons, then Japan.
Rance Mulliniks.. I have an irrational dislike of this guy. I think it comes from his broadcasting. Anyway, he was a Jay from 1982-1992, winning the Series with the Jays.
Dale Murray spent 1981 and 1982 with Toronto before going to the Yankees and Texas to finish his career.
Geno Petralli played for Toronto in 1982-1984. Petralli went on to play in Texas, backing up some guy named Ivan Rodriguez.

Rick Leach played for the Jays from 1984-1988. He went to Texas and San Francisco after his stint.
Mark Eichhorn did two tours with Toronto. He played in 1982, then 1986-1988 before signing with California. In 1992, he was traded to Toronto and spent 1992 and 1993 with the Jays. 1994 was spent with Baltimore and 1996 in California.
John Cerutti played from 1985-1990 with the Jays before going to Detroit. Cerutti was a broadcaster for Toronto after his playing career. He was on CBC and Sportsnet before he passed in 2004. 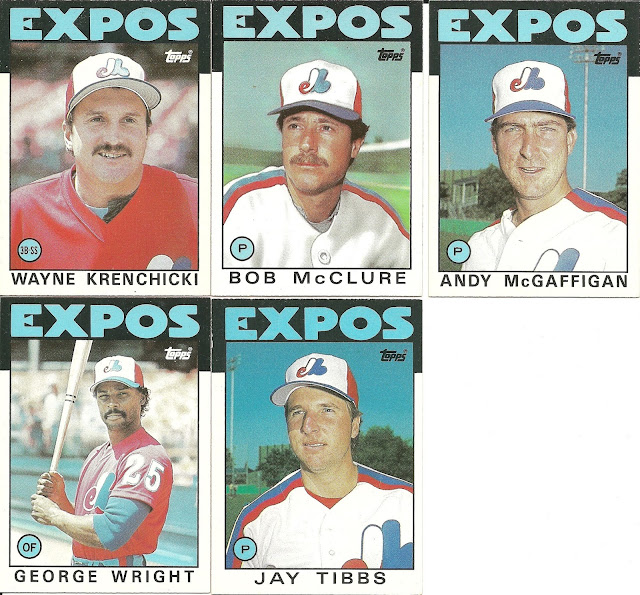 Some Pinnacle from 1992.. I love this set. I think it'd be one that I'd like to finish sometime.

Juan Guzman played for Toronto from 1991-1998, going to Baltimore, Cincinnati, and Tampa Bay afterwards.
Todd Stottlemyre played for Toronto 1988-1994. He won two World Series with Toronto. After Toronto, he played for Oakland, St. Louis, Texas, and Arizona. He's now in the business world, the Regional Vice President of ACN Inc.
Jack Morris pitched for the Jays in 1992 and 1993 before finishing with Cleveland in 1994. Post career, Morris has gone into broadcasting. He's worked for the Twins and Tigers mostly, but did a season for the Jays. 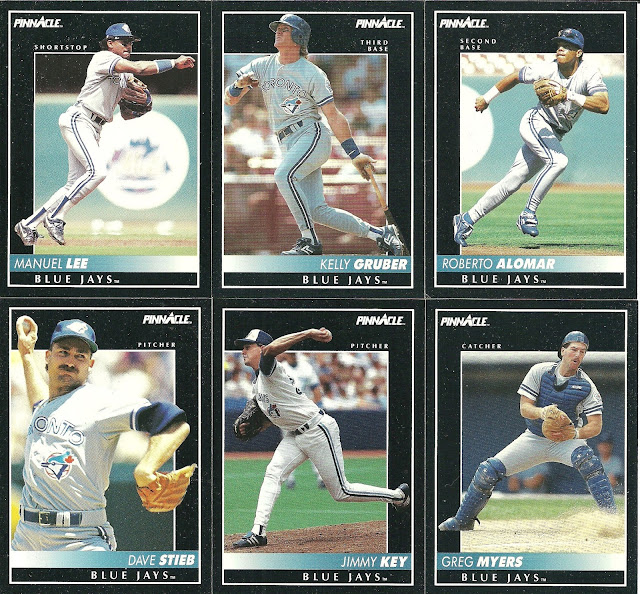 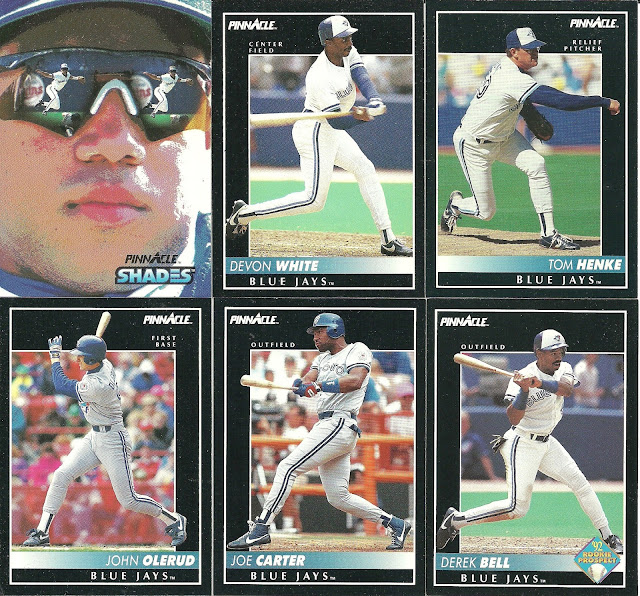 A Roberto Alomar Shades card.. An insert that was part of the base set. Pinnacle had a few of these.
Devon White played for Toronto from 1991-1995, playing for Arizona, Florida, Los Angeles, and Milwaukee afterwards.
Tom Henke played for Toronto from 1985-1992. He got his nickname from John Cerutti after they saw the movie The Terminator together. He played in Texas and St. Louis. Now he works with some charities around his home.
John Olerud played in Toronto from 1989-1996 before going to New York (Mets), Seattle, The Yankees, and Boston.
Joe Carter played for Toronto from 1991-1997. He played for Baltimore and San Francisco afterwards. Post playing, he did some broadcasting, doing Jays games in 1999 and 2000. He then did Cubs games in 2001-2002. Every year he holds a celebrity golf tournament in Toronto for the Toronto Children's Aid Society.
Derek Bell played in Toronto in 1991 and 1992 before going to San Diego, the Mets, Houston, and Pittsburgh. In Pittsburgh he enacted "Operation Shutdown" saying he should be given an every day spot because he was a veteran, regardless of his performance. It didn't work out well for him.. He was released and as Mark Madden put it, became the Ultimate Pirate: Living on a boat and stealing money. He has also been arrested twice for drug possession. 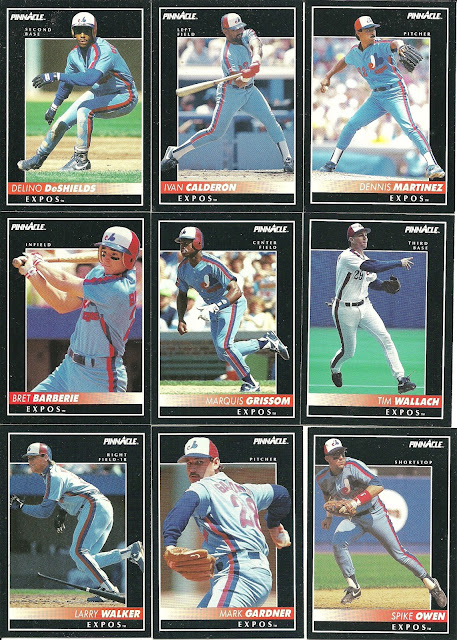 Delino DeShields played for Montreal from 1990-1993, going on to play for the Dodgers, Cardinals, Orioles, and Cubs. Post playing, he started the Urban Baseball League with Oil Can Boyd. He has also done managing in the minor leagues. His son currently plays on the Rangers.
Ivan Calderon played for the Expos from 1991-1992. He spent 1993 with the Sox, both Red and White.
Tim Wallach played for the Expos from 1980-1992, finishing his career with the Dodgers and Angels. He has been in coaching/managing since then.
Larry Walker played in Montreal from 1989-1994, going to the Rockies and Cardinals afterwards. He does coaching for the Canadian National teams.
Mark Gardner pitched for Montreal from 1989-1992 before going to Kansas City, Florida, and San Francisco to finish his career. He's now coaching.
Spike Owen played for the Expos from 1989-1992 before going to the Yankees and Angels to finish. Owen is now coaching, this season with the Rangers. 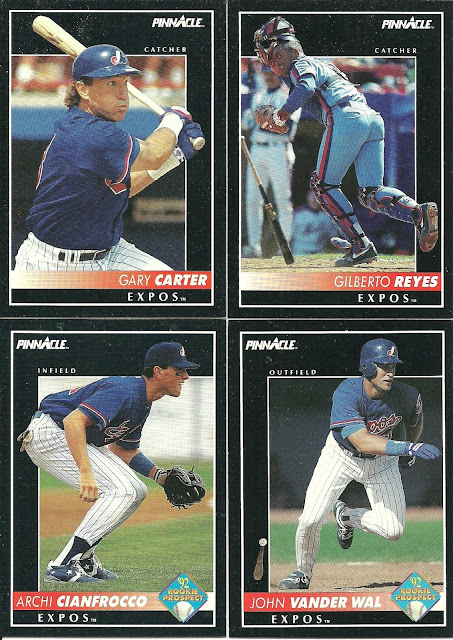 Well, I hope that was a little informational as well. :)