In the blink of an eye, it's Saturday again.

Time to show another autographed card in my collection. 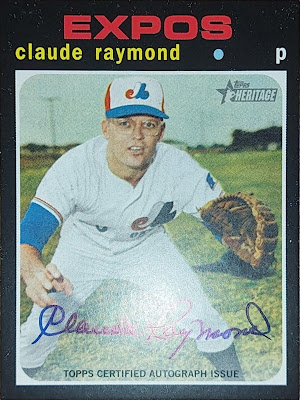 Claude Raymond! The happiness on this one is twofold. 1. Expo. 2. Canadian.
He played for the White Sox, Braves, Colt .45/Astros, and Expos.
After his playing days, he spent years with the Expos as a broadcaster and a team ambassador. He spoke to the fans at the final Expos game at the Big Owe.
He also did the Public Address announcements for baseball at the Atlanta Olympics. There was/is a requirement that announcements are made in English and French. Who better than a guy who speaks both and pitched for the Braves at one time?