Another set I'm looking to complete, 1992 Triple Play. I remember collecting it when I was first getting into collecting. It wasn't a bad set, though I think I like the sets that came out afterwards more, even if I couldn't find them. 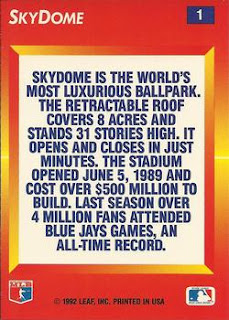 The first card in the set shows the SkyDome.. I wanted to show the write up on the back for that card.
Some of the cards have trivia and other player information. 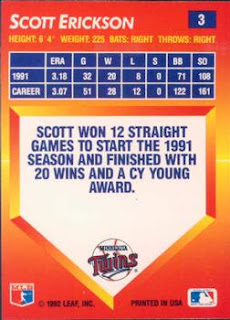 It shows one year of stats, which annoys many collectors. This one also has an uncorrected error in it, as Erickson didn't win the Cy Young Award in 1991, but finished second. 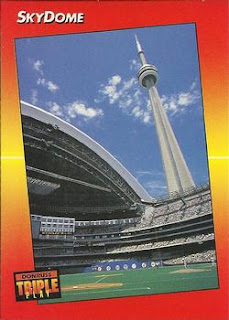 Here's the front of the SkyDome card. Generally not too bad. In a way it almost looks like a magazine insert or a scrapbook style set, if that makes sense. 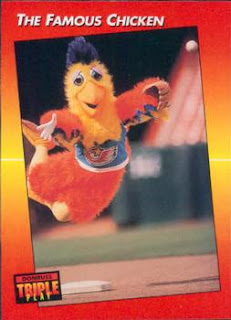 The Chicken! Likely not Pete Rose in there. Considering Kane isn't around, it's safe to say it's not.. 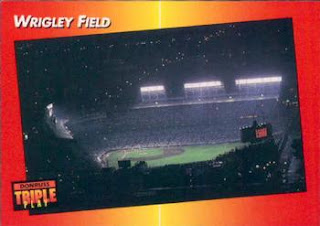 Wrigley at night is also featured. There are three stadium cards in this set. The Dome, Wrigley, and... 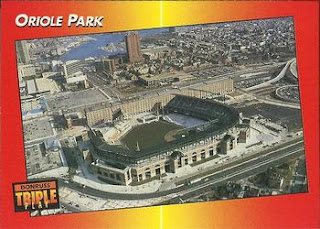 Oriole Park. I do like this photo. Being a collector of  stadium cards, I need second copies of both this and Wrigley. 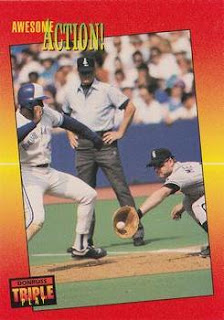 One of the things in the set are Awesome Action cards. Here we see a poor Blue Jay getting picked off at first base. It also has cards with photos of major leaguers as little leaguers. 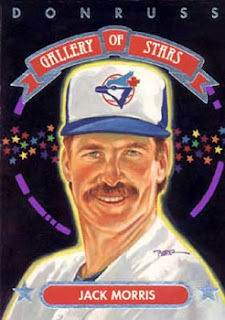 Of course, being a Donruss product, they need something similar to Diamond Kings. Since they're not going to use that name here, they went with Gallery of Stars. This insert has 12 cards in it.. I have the first 6. I need the second 6.
Overall, I am just under 80% complete on this set. I hope to complete it sometime soonish.