When I was growing up one of the places people liked to go was Duluth, Minnesota. My mom made the trip a couple times with friends. I drove through/past Duluth a few times. There was even a time my dad and I went to Minneapolis to see a Jays/Twins series. The reason I mention Minnesota today is the package I received in the mail from Adam at Addiction As Therapy.

Now, while I currently live about an hour and a half from Toronto, I was born and raised in a small northern town called Terrace Bay. 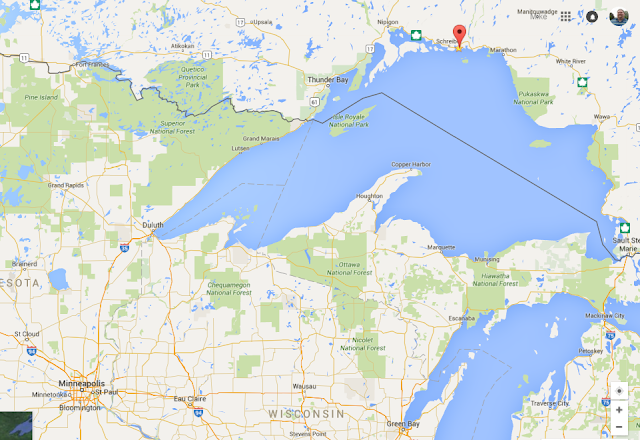 Anyway, this is about the trade, not a Geography lesson.. Let's get to it.. 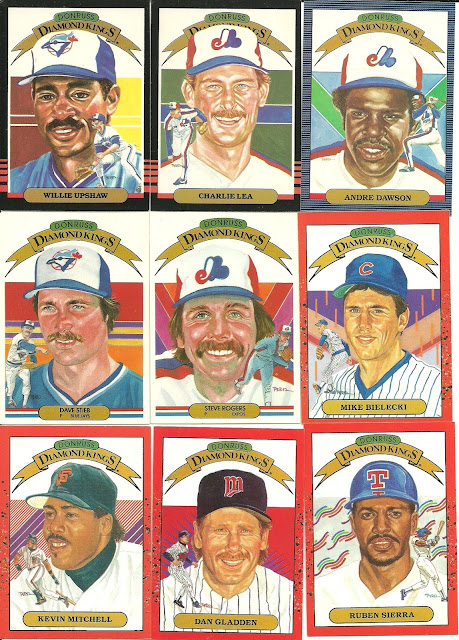 Some miscellaneous Donruss Diamond Kings. I've always loved these cards. The Steve Rogers in the middle is interesting as Donruss spelled his name incorrectly on the back, spelling it Rodgers. 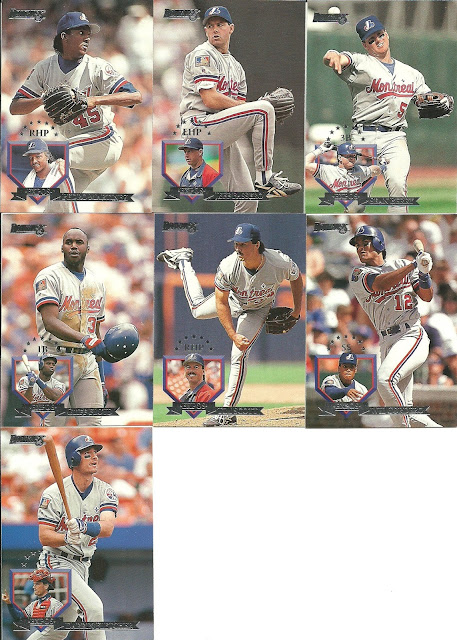 Speaking of Donruss, we have some 1995 Expos. I never saw this design when it came out. For the most part until I moved to Peterborough the extent of my collecting was 1990-1993 product. Love the front of these cards. 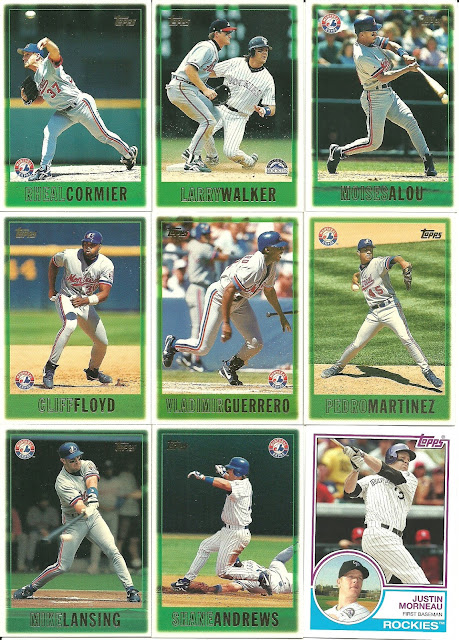 Some Topps Expos and a couple Canadian Rockies. I actually forgot Cormier pitched for the Expos. It's odd seeing Larry Walker in anything but the Bleu, Blanc, et Rouge but there he is.. Some real good young players in that middle row, if you think about it.. Cliff Floyd, Vladimir Guerrero, and Pedro Martinez. I don't mind these ones, though I don't like how the first names are just an outline. 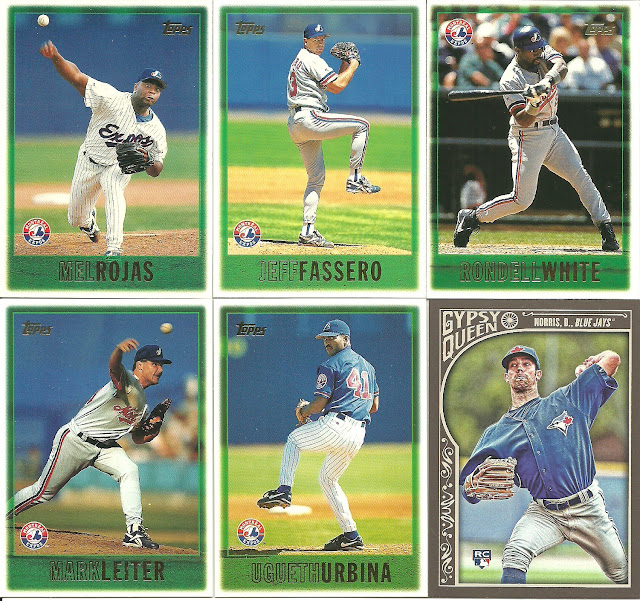 We have some more Expos and a Daniel Norris. Rojas started and ended his career as an Expo. He is also the nephew of Felipe Alou.

Ugueth Urbina is an interesting one.. He's the only player to have had "UU" initials in the Majors. His career also ended rather abruptly as a result of an attempted murder charge that he ended up spending 7 years in prison for. 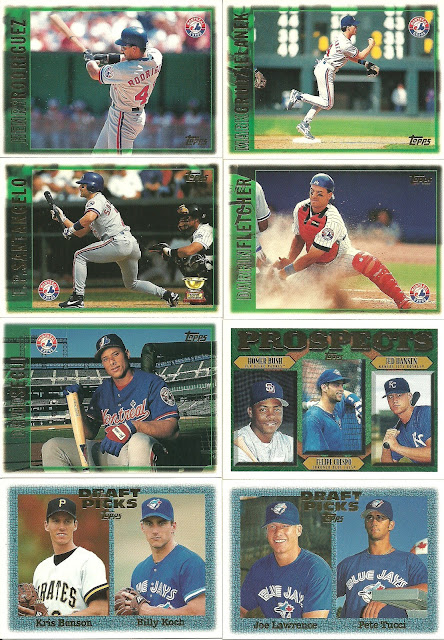 Henry Rodriguez was a bit of a cult figure in Montreal. In 1996 he gave the fans who decided to show up after the strike something to cheer about at the Big O. Fans started throwing Oh Henry! chocolate bars onto the field whenever he hit a Home Run, and gave him the nickname Oh Henry! He went to the Cubs in 1998, played part of a season in Florida in 2000, wore pinstripes for a week's worth of games in 2001 before returning to the Expos in 2002.. He was released in May of 2002.

Darrin Fletcher and David Segui each spent time on both Canadian teams. Here they are Expos. Finally we have some draft pick cards.
Homer Bush spent some time with the Jays after going to the Yankees. Felipe Crespo was a bench player for the Jays for a few years before moving on.. I honestly thought his career lasted longer than the 5 years Baseball Reference has it..
Billy Koch, who, after the Jays released him in Spring Training in 2004 decided to sit on the sidelines and collect his salary ended his career. The second game of the season he showed up at Tropicana Field and heckled the Jays. His Cardmate, Kris Benson, was a fairly decent pitcher, but is likely known more for his ex-wife Anna.
Joe Lawrence who is best known for not being the Actor Joey Lawrence, played 55 games in the Majors with Toronto in 2002 and was done as a player by 2004. I never heard of Pete Tucci. 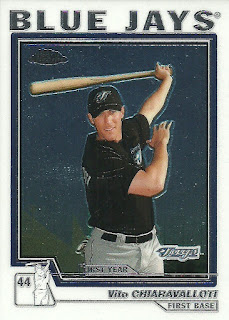 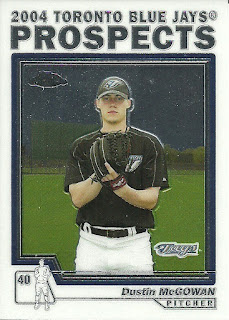 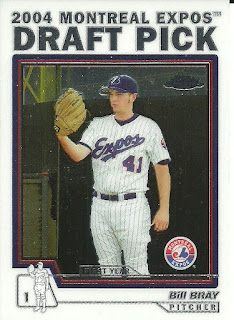 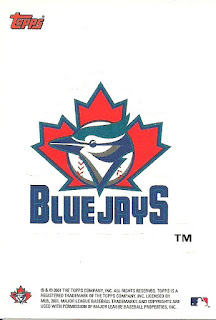 A nice foursome of cards here. Of the three prospect cards, the best known is Dustin McGowan. Vito never made it out of Double A before being released and playing on the Indies..
Bill Bray ended up showing in Washington before going to Cincinnati.
Finally, a Topps sticker logo card. This one gave me a little grief trying to find on the Trading Card Database. The copyright on it is 2001.. Topps Produced stickers in the 2001 Opening Day set, but this isn't part of it.. The same stickers, minus the Opening Day logo, were part of the 2002 set.. ARGH!!

Speaking of Stickers and Opening Day,.. Here are two Expos stickers from 1988 and an Opening Day Jose Reyes insert. I like the back of the Fleer sticker cards here since they have the same style back as the cards. 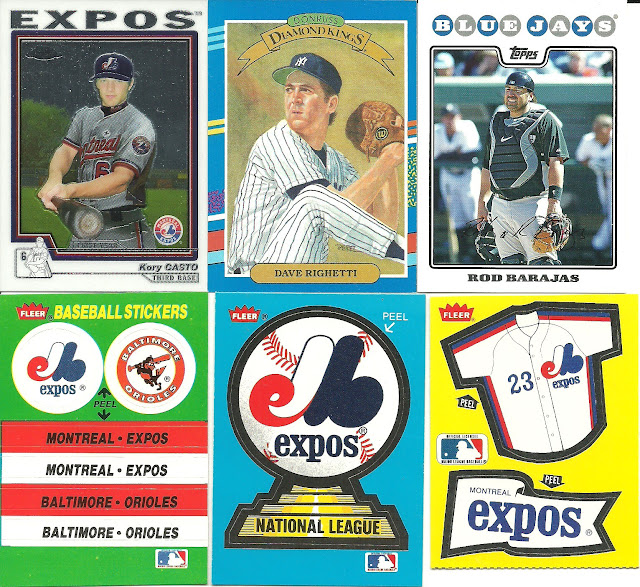 Some more stickers and some miscellaneous. Another Diamond King this time for 1991.

I like the jersey and the logo stickers, but I think the one I have to like the most is the one on the left.. And that's because of this..... 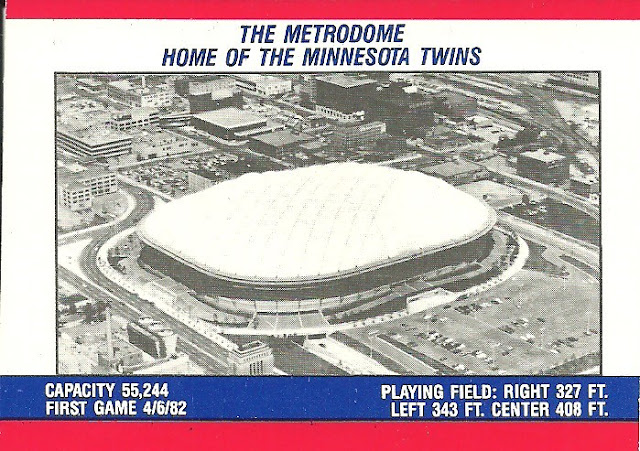 I've mentioned before that I love stadium cards. It's something that I'm not actively trying to collect though, since I know it's tough to find when there's different ways they can show up.. However, this grouping, with the stadiums on one side and the stickers on the other, I absolutely love.. I was fighting myself on whether this goes with my stadium cards or if it goes with my Expos cards because of the sticker..

Thank you again Adam for the wonderful cards. I hope we are able to trade again sometime!