And Now Something Completely Different

As baseball fans, we find ways of supporting our favourite teams or players, ranging from collecting cards to buying hats, to getting jerseys with our favourite player's name on the back.

One other way, if you're able to afford it/live close enough to it, is go to games. While looking for something else, I found a couple things I want to share today..

Tickets for a few games, back before printing the tickets was the big thing to do.. You'll notice all the games I have the tickets for were attended in April. Most of these were birthday presents from my now ex-wife. Because of my birthday being when it is, the season is rarely underway. This is not true for the first one though: I got to go to the second game of the season, since my birthday was Opening Day that year...

I just realized I have two tickets from the same game.. Oops.. lol

The other two were different events.. The second to last one is from a WWE (WWF at the time) wrestling event held at Fort William Gardens in Thunder Bay. The last ticket was my first Barenaked Ladies concert held in Oshawa at the General Motors Centre. I think this was a birthday gift as well, but I can't remember.

Since then the Barenaked Ladies have played Oshawa and my current home of Peterborough. Of course having no employment meant I couldn't get a ticket for it.. 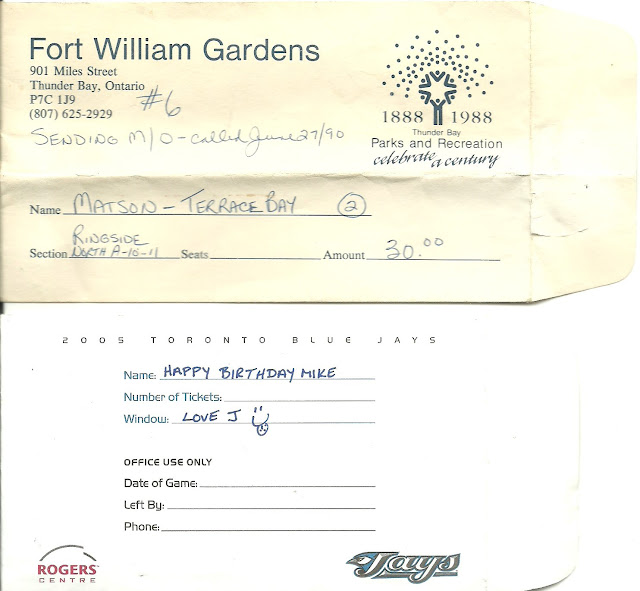 Here are a couple envelopes I saved.. The first one was from the wrestling event at Fort William Gardens. My dad and I went to the matches. I love the little things on that envelope like the 100th anniversary of the Parks and Recreation department in Thunder Bay. Of course, Thunder Bay befrore 1970 was known as Fort William and Port Arthur.

The bottom envelope was from the birthday game. I guess that part is obvious from the "Happy Birthday Mike" in the name section. This one I find a little plain, with just the Rogers Centre and Angry Birds Jays logos on there, but I guess the envelopes don't really need to be interesting.

So yeah, I wanted to showcase something different today.. I have some cards to go over next post.