Yes, this is a baseball blog. However, with the NHL season starting this past week, I wanted to just mention one of the two hockey players I collect, plus a couple of players who were drafted by both MLB teams and NHL teams.

So, as you may or may not know, I'm Canadian.. I grew up in a small town called Terrace Bay, Ontario. Typical small northern Ontario town. Everyone knows everyone else, isolated from urban centres, and plenty of time during the winter for hockey, snowmobiling or whatever other winter activity you enjoy.

In this vein, I would like to introduce Charlie Simmer. He was born in Terrace Bay, played youth hockey there until going to Kenora. He was drafted by the Sault Ste. Marie Greyhounds, then the NHL California Seals. (Interesting baseball tie-in, at one point Charlie Finley owned the Oakland A's as well as the Seals)

In his NHL career, he played for the Seals, the Los Angeles Kings, The Boston Bruins, and the Pittsburgh Penguins. Of course, there was the possibility none of this could have happened. After 5 years in the Kings farm system, he was ready to quit hockey altogether and move back to Terrace Bay to work in the pulp mill. 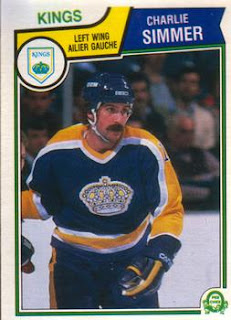 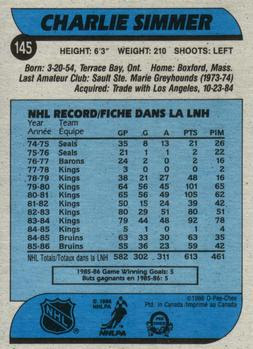 I was in elementary school with his nephew. We were classmates. My mom was friends with his sister. Small town living.. :)

Anyway, how this ties in with baseball, you're probably wondering. Here's how: There have been a few players who have either been drafted by both MLB and NHL teams, or drafted by NHL and signed by an MLB team. I want to cover those today.

Tom Glavine. I believe he made the correct career choice, being that he's a Hall of Fame pitcher. Glavine was drafted by the Los Angeles Kings in the 4th round in 1984. Interestingly enough, he was drafted two rounds before Hockey Hall Of Famer Brett Hull and and five rounds ahead of Luc Robitaille, another Hockey Hall of Famer, both being inducted in 2009. He was drafted in the 2nd round of the MLB draft by the Braves. Again, he made the solid choice.
In 1992, the Score company put out two cards mentioning Glavine's hockey past with a Pinnacle Sidelines card, and a Base set Dream Team card. Both show him in a Braves uniform skating. I unfortunately do not own these cards, so I will not show them on here.

Nyjer Morgan. Well, I'm stretching here and I realize it. He was never drafted by an NHL team. The highest he got was Major-Junior, a 16-19 league that is considered professional by NCAA standards. He played for the Regina Pats of the Western Hockey League, part of the Canadian Hockey League banner. After being released by the Pats, he focused on baseball.

Eric Lindros. Now I'm stretching the opposite way. Lindros was drafted by an NHL team, but was not drafted or signed by an MLB team. He was drafted by the Quebec Nordiques, but did not sign with them. Instead, he worked himself into a trade to the Philadelphia Flyers, following Pete Incaviglia's 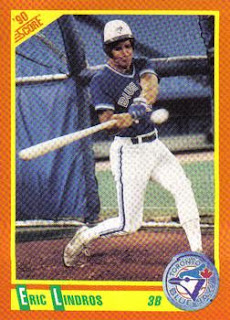 lead in the 1980s by demanding a trade from the team that drafted him. It would be rather interesting to see how Lindros would have fared as a baseball player. He may have been able to avoid the concussions that ended his playing career 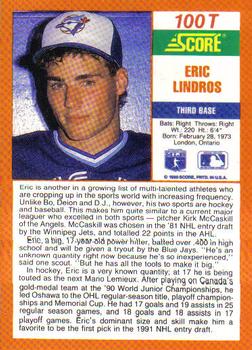 I find it interesting that youth in sport are getting so specialized that we may never see another Bo Jackson or Deion Sanders, or even Kirk McCaskill. The amount of money thrown at players precludes them from being able to be more rounded in sport, and being able to excel in more than one.