A little different today. Most of the time, I write about teams and players from Major League Baseball. This is about the Northern League Thunder Bay Whiskey Jacks.

Originally, it was felt the league would not last long, especially in St. Paul where they were in competition with the Minnesota Twins. The Rochester Aces was the only team that struggled, and after the 1993 season, was sold and moved to Winnipeg to become the Goldeyes.

The 1993 team was a team of unknowns for the most part. In the new league, they ended up 36-35, third in the league. The most noteworthy players are Ty Griffin and Rodney McCray, who is best known as the guy who ran through the wall in the late 80's/early 90's highlight reels. 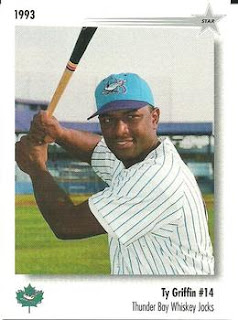 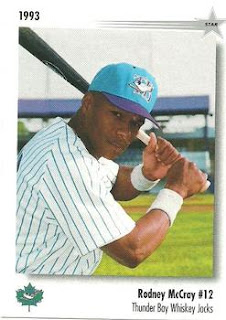 Other players included T.J. Rosenthal, who became a fan favourite very quickly in Thunder Bay.
When the public address announcer would introduce him, the fans would follow along with the PA. 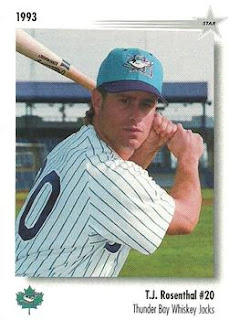 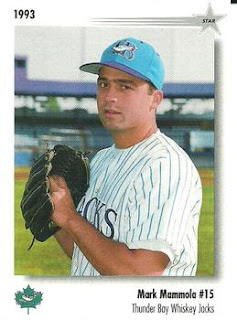 On the mound, the team was led by Mark Mammola and Pat Tilmon. 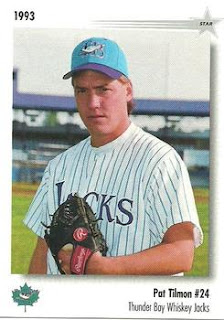 Being much closer to Thunder Bay and Port Arthur Stadium than I was to Toronto and the (Then) SkyDome, I got to see a few games.

For the most part, I got to see the Jacks win. 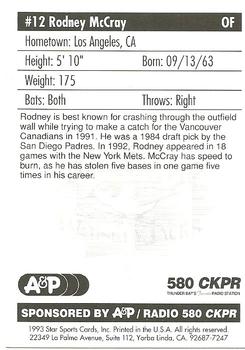 Below is a sample of the back of the cards. They are typical minor league fare, with the basic information and a small write-up on the player and ads at the bottom.

I have the 1994 set as well. I plan on featuring them another time.

The Jacks were in the Northern League until 1998 when a CUPE strike in Thunder Bay, causing the Whiskey Jacks to be a road team. Port Arthur Stadium is city owned, and as a result was not maintained during the strike. Low attendance was the final nail in the coffin, as the team was sold and moved to Schaumburg Illinois.
Posted by Mike Matson at 5:36 PM