Well, last night the teams taking part in the ALCS were decided. One game had a lot more drama and emotions running high, while the other was a hired gun finally pitching the way the team hoped. 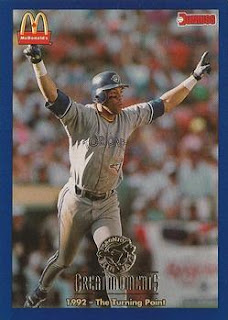 Earlier I wrote about the times the Blue Jays clinched a postseason berth. Each entry I also gave the outcome. 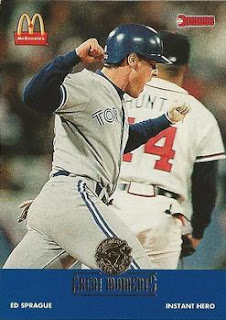 In 1992, the Jays were facing a familiar nemesis in the Oakland Athletics. Generally, the home runs come from the A's side with Mark McGwire and Jose Canseco, however this year would be different.. Dennis Eckersley, the closer for the A's, came into the game in the 8th with a 6-4 lead. He struck out the final batter of the inning and glared and pointed into the Jays' dugout. In the 9th, Roberto Alomar came up with a runner on and proceeded to hit the ball into the stands to tie the game. The Jays ended up winning in the 10th inning.

Dennis Eckersley was in a run of dominance during the late 80s/early 90s. The problem was no matter how dominant he was during the season, someone would hit him in the postseason.

The other big home run for the Jays in 1992 was by a little known Ed Sprague. Sprague was a catcher at Triple A Syracuse for most of the season but made the postseason roster. In game two of the World Series, he came up in a major situation. On base was a fellow pinch hitter in Derek Bell. On the mound was long-time closer Jeff Reardon. The Braves were up 4-3 in the game and 1-0 in the series. Ed Sprague hit the first pitch he saw from Reardon over the fence for a two-run home run. The Jays held the lead to tie the series at 1.

Now, we all know the major home run from 1993. The image has been burned into our minds for years now, and has been featured during the whole postseason run by the Jays.

I had to go with the video featuring the former radio voice of the Jays, Tom Cheek. Because well, Tom Cheek.

All this leads to last night. The Toronto Blue Jays were facing the Texas Rangers (Or if you believe their uniforms, the Texas Texases) and there was a play that you will likely never see again. In the 7th inning, Russell Martin went to throw the ball back to Aaron Sanchez on the mound. The ball hit the bat and hand of Shin-Soo Choo while he was in the batter's box and went down the third base line. Rougned Odor scored on the play. Much confusion and delay.. Go Ahead run scores on fluke play. The fans were not impressed. Bottom of the inning, just to prove they aren't robots, Elvis Andrus and Mitch Moreland committed three errors between them, allowing the Jays to rally.. Cue Jose Bautista. He hit the home run to put the Jays ahead.

Now the Jays go to Kansas City to face the Royals.