Stuff I Brought With Me

So yesterday I spent time out of the hospital. I went to my old residence to see what was there and to maybe start packing. Got a little done but I found a bunch of cards I forgot about. I don't honestly know if they're catalogued or if I've talked about them before but here's a selection.. 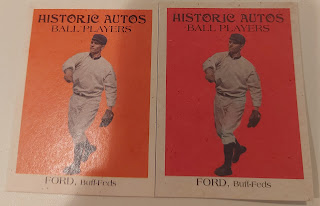 I found out about this Historic Autos set and saw it had Russ Ford in it. One is base, the other is numbered to 299. 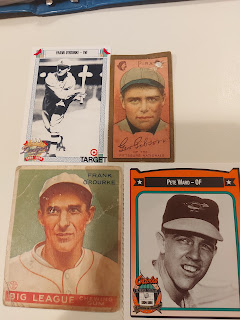 Frank O'Rourke. The Big League is rather.... Well Loved.... But still decent for a 1934 issue. Pete Ward in an Orioles anniversary issue. O'Rourke in a Target Dodgers issue, and a George Gibson with a hole punched in it.. 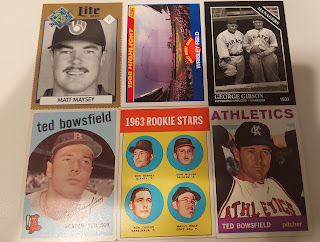 Ted Bowsfield. One as a Red Sock and one as an Athletic. The 63 Rookie Stars is there for Ron Taylor. Matt Maysey is from Hamilton Ontario and is a Brewer in that team issued set. Wrigley goes into my stadium collection. 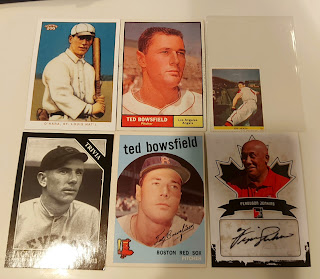 More Bowsfield. A Jeff Heath stamp. The Conlon is Jack Graney. He was a player and broadcaster. There's an award for best Canadian sports broadcaster named for him.
The Jenkins auto is from the Canadiana set. 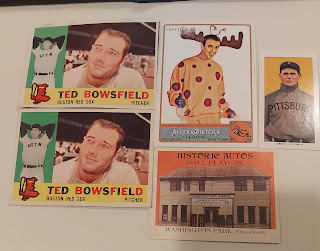 Two more Bowsfield cards. The backs are different.
The Washington Park card is from the same set as the Ford.
Dirk Hayhurst dressed as the Garfoose..
Finally, a reprint of a George Gibson card.
As I said, I may have shown these before. If it is a repeat, I apologize, but at the same time, these are nice to visit.
Posted by Mike Matson at 2:38 PM