Some Expos and Stadiums

On this last day of June, I'd like to show off a trade I made with Twitter member and TCDB member MjPrigge.
We've followed each other on Twitter for a while now, and I believe have made a couple transactions before as well. At one point he showed off some autographed cards and I commented about a couple.
Since they were duplicates for him, he decided to send them to me, and since we're both on TCDB, he put together a transaction and off we went.. 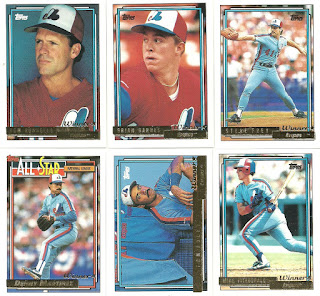 First we have some Topps Gold Winner Expos. They're easier to read in scan than they are in hand. That's rather annoying. 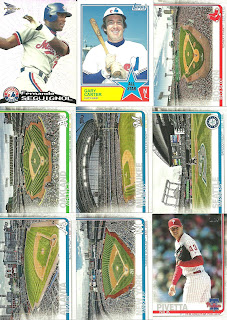 The Expos continue with a Fernando Seguignol and a Gary Carter 1983 All Star throwback from 2012. (it seems as though Topps has been hitting the retro/nostalgia button hard over the last 10-15 years, no?)
I've mentioned it before, but I love stadiums. Just how each stadium is different, aside from that 90 foot square in made of dirt. Dimensions, wall heights, covered or non... All different. All unique..
*ahem*
Right.. And a Nick Pivetta to add to the Canadians collection. 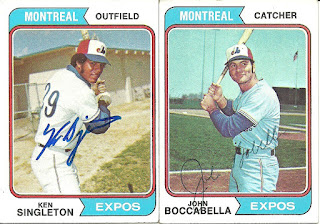 The two cards I commented on..
Now.. I have a Ken Singleton autographed card from 1972, I believe.. This one is 1974.
And while I may be a day late...
Johhhhhnnnnnnnn Bocccccccccccccaaaaaaaaaaaa belllllllllllllllaaaaaaaaaaaaaaaa
makes an appearance as well.. (it was his birthday yesterday)
Thank you Matt!
Now.. Tomorrow is July 1.. That means it's Canada Day!
I'll likely have something posted tomorrow about that.. We'll have to see just what I have up my sleeve.
Posted by Mike Matson at 6:54 AM