I recently got an email from CrazieJoe saying he had some cards for me
Naturally, I was happy to receive whatever he had.
There were a number of Expos cards to add to the Million Expos Project that I didn't scan here. But there were some new Expos and a lot of new Jays 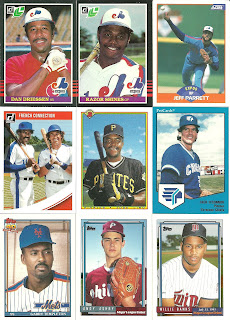 A couple 1985 Leaf Expos. Razor Shines and Dan Driessen. Jeff Parret from 1989 Score and an awesome Andre Dawson/Gary Carter Donruss.
Jose Lind goes into the Bowman.
Syracuse Chiefs represented here as well.
I don't know why but I find those Pro Debut cards interesting. Topps did them for a few years in the early 90s. 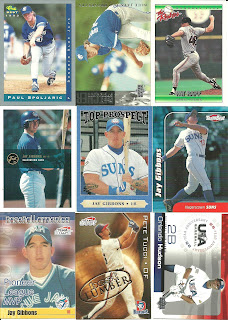 Paul Spoljaric makes a couple appearances here. Pat Rapp from the 1992 Donruss The Rookies set.
Jay Gibbons in various minor league cards. Gibbons was a Jays farmhand until the 2000 Rule 5 Draft.
Pete Tucci and Orlando Hudson round out this one. 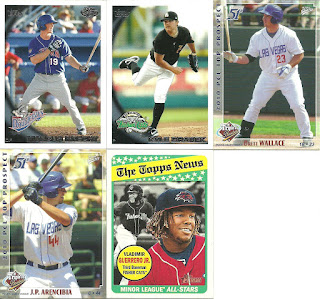 Finally, we have Kyle Drabek, Brett Wallace, JP Arencibia, and a Vlad Jr puzzle card.
The other card I didn't mention is Marcus Knecht. I thought it was odd at first but then I saw he's Canadian.. Then I realized that in 2010 the Auburn Doubledays were the NYPenn League affiliate of the Jays.. So... Yeah..
Thank you Joe!
Posted by Mike Matson at 1:35 PM