The third part of the cards Julie sent my way came in last week.. I will admit last week wasn't the best for me, so I apologize for not saying anything sooner. 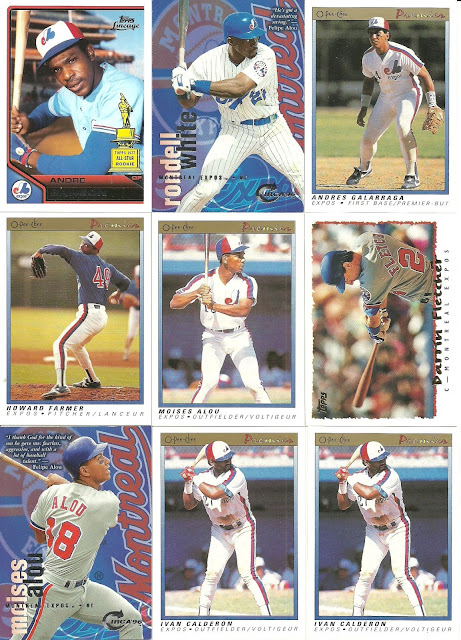 Sets like Archives, Lineage, and Heritage are great for keeping the Expos alive. Of course, with those you generally see the same guys: Raines, Dawson, Carter.. I'd love to see guys like Steve Rogers, Andres Galarraga, Moises Alou, and Larry Walker in Expos colours. I was amazed Topps found a Pedro Martinez photo to use as an Expo in this year's Archives.
OPC Premier is an interesting set.. I know I've said it before, but I prefer the first year over the second year. I believe they did a 1993 set as well, but I've only seen a couple cards from it.
The Circa cards.... Can you tell they're Fleer?? 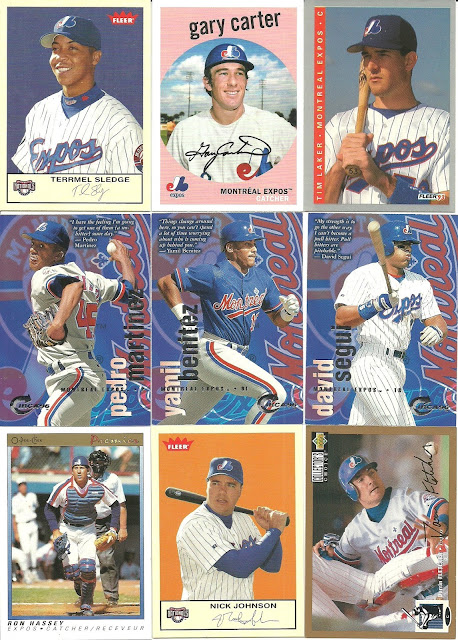 Hey speaking of Gary Carter, here he is, I believe from this year's Archives.
More Circa as well. The three shown here can definitely tell the "Throw stuff at the wall and see what sticks" mentality they used for design in the mid 90s.
Terrmel Sledge and Nick Johnson represent the darkness and a grey area..
They are from 2005.. Fleer had photos of the guys in Expos uniforms, but has that evil Nationals Logo on the bottom. (I'm sorry, Nationals fans... I just don't like the way the team moved. I also don't like how they selectively use the history of the Expos.)

Anyway.. Thank you Julie!!! Assuming we avoid a postal strike and I get the motivation to continue my sorting, I hope to get something together for you.. Maybe I can use a possible strike to get motivated to sort... I don't know... We'll see..