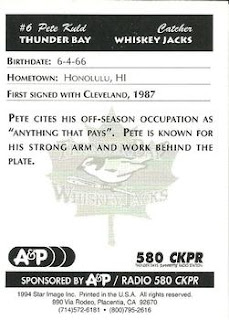 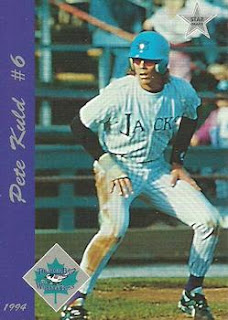 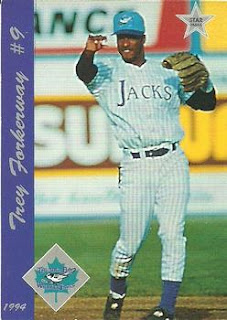 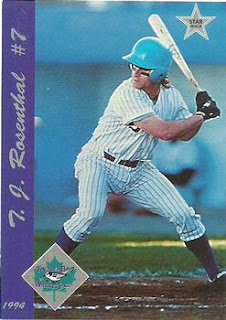 T.J. Rosenthal was a First Baseman and Outfielder for the Jacks in 1993-1995. He ended up in Thunder Bay after playing for the Salt Lake Trappers in the 1992 Pioneer League season.

I believe it was during or after the 1995 season he decided to redirect his energy to a band, The Bowery Riots.

During his time in Thunder Bay, he was a fan favourite. The PA announcer would draw out his name with the fans joining in. 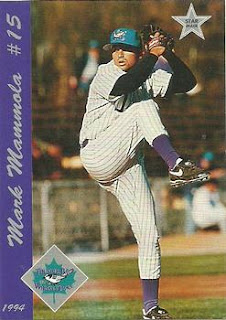 Mark Mammola played from 1991-1995. He spent a little time in the Angels system, playing for Boise and Quad Cities before finding himself in Salt Lake. He joined the Jacks for the 1993 season, and was a member until 1994. In 1995, he played for Mohawk Valley in the Northeast League. 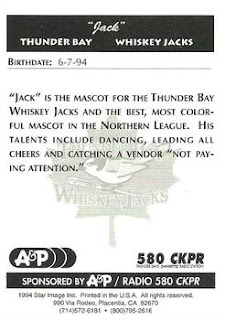 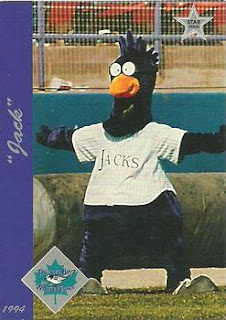 What's a minor league set without the obligatory mascot card??? He wasn't in the first set, but here he is! It's Jack. I mean, there's not much I can say about this one. He's the mascot.. He does Mascot stuff. Kevin Brown. Yes, another one. This one is from Brampton, making him the only Canadian on the roster for 1994.

Prior to going to Thunder Bay, he played for the Giants Arizona Rookie ball team. He was there from 1991-1993. 1994 was his final year in baseball of any kind. He was 22 when he retired. 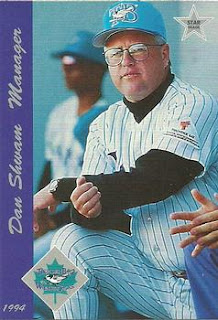 Dan Shwam was the manager for the Whiskey Jacks for 1993 and 1994. After a disappointing season in 1994, he went to the Northeast League, managing for Mohawk Valley. He ended up managing different teams until 2009..

He's been managing in the PGCBL. 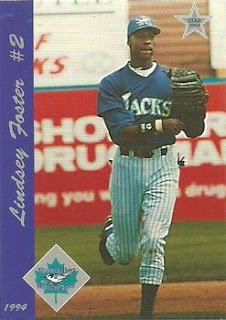 Lindsay Foster was drafted by the Blue Jays in the 1986 draft. He played in Medicine Hat, St. Catherines, Myrtle Beach, Dunedin, and Knoxville for the Jays until 1988.

From 1989-1992 he played in the Indians and White Sox organizations.

1994 was his final year in baseball, playing for Thunder Bay.


The final one I will highlight is Pat Tilmon. He played for the Braves from 1987-1990, never making it above Single A Ball.

Timon was with the Whiskey Jacks from 1993-1998, with a short stay in Syracuse, where he was assigned after the Replacement Player Spring Training in 1995. When the Jacks were no longer around, he was on the Sioux City Explorers. 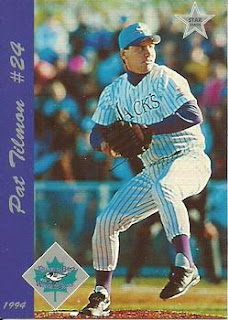 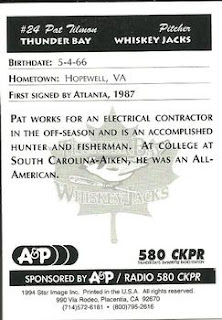 Overall these are typical minor league cards. Local ads on the back. A small write-up on the player, I do like the full-colour photo on the front.