Today is the 75th anniversary of Jackie Robinson's MLB debut. I have two separate angles I look at this from.

First, and most important for this blog, from a Canadian Baseball perspective and second, from a Douglas Adams fan..

First. The baseball and Canadian connection..

I'm sure by now everyone knows the story of Robinson signing with the Brooklyn Dodgers and being assigned to Montreal of the International League to see if he could handle "white" ball and the treatment he'd receive at the time.

Montreal was chosen because it was one of the more progressive cities at the time. The fans welcomed him. His teammates welcomed him, and those that didn't were brought into line.

His one season with Montreal, they won the Junior World Series, the championship at the time. Fans were so overjoyed they rushed the field to celebrate and to be able to congratulate Robinson. After the celebration was over, fans waited outside the clubhouse for one final chance to touch Jackie before he went to Brooklyn.

A writer at the time said "This is the first time a white mob chased a black man not out of hate, but out of love" 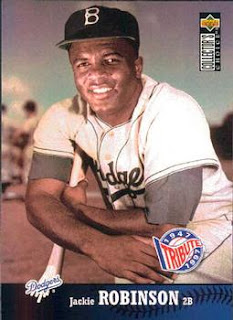 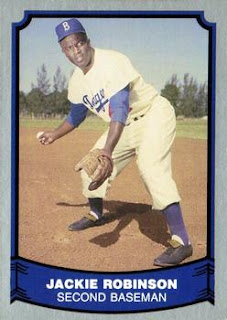 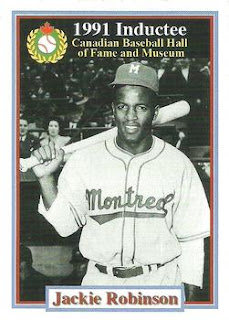 The three cards above are my Robinson collection. The Canadian Baseball Hall of Fame inducted him in 1991 for his contributions to baseball in Canada. Obviously having played one season, it's the overreaching significance of the colour barrier but just try to tell me he doesn't look good in those Montreal Royals unis...
The other point I mentioned is the Douglas Adams thing. Well, it's to do with 42. In the Hitchhiker's Guide to the Galaxy, 42 is the answer to the ultimate question of Life, the Universe, and Everything.
Anyway, enjoy the games tonight.